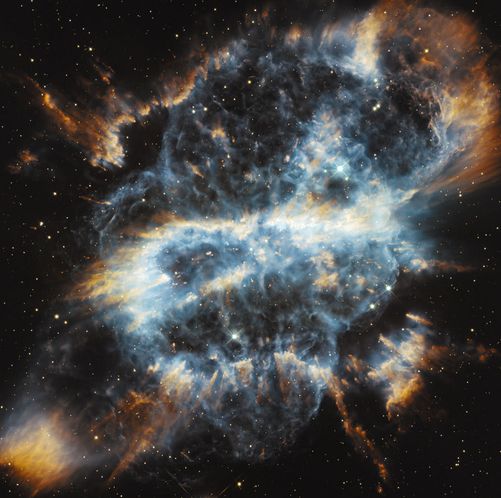 I was observing and studying the APOD image of the complex planetary nebula NGC 5189 posted on 19 December of 2012. The image for NGC 5189 is credited to NASA, ESA, and Hubble Heritage Team (STScI/AURA).

"This is their explanation as to why the image appears as it does: When a star like our Sun is dying, it will cast off its outer layers, usually into a simple overall shape. Sometimes this shape is a sphere, sometimes a double lobe, and sometimes a ring or a helix. In the case of planetary nebula NGC 5189, however, no such simple structure has emerged. To help find out why, the Earth-orbiting Hubble Space Telescope recently observed NGC 5189 in great detail. Previous findings indicated the existence of multiple epochs of material outflow, including a recent one that created a bright but distorted torus running horizontally across image center. Results appear consistent with a hypothesis that the dying star is part of a binary star system with a precessing symmetry axis. Given this new data, though, research is sure to continue. NGC 5189 spans about three light years and lies about 3,000 light years away toward the southern constellation of the Fly (Musca)."

As an artist, I observe compositions of images perhaps in a different way.  Thus my conclusions may not be perfectly aligned with others in the scientific field. I also express my ignorance on many subjects.

Many astronomers assume that all phases of novae explosions expell material outward from stars at the same velocity. Do they take into account the different amounts of energy within the star located at various places which may cause expelled material to move at different velocities during and after the explosion?

Perhaps there may be different velocities of the ejecta dependent upon where the greater mass of energy had been within the star at the time of the explosion.

Another question I have is, could the velocity of the ejecta have anything to do with the rotation rate of the original star?  The rotation rates of stars are not uniform throughout since they are not solid.

This brings into question past theories as to how astronomers determine the age of the nova (when it occurred) when the time factor is used assuming all ejecta moves at the same rate of speed. Thus, past conjecture as to the time in history when a nova occurred may be in error.  It would be interesting to compare the velocities of different star regions within expelled nebulous materials of more recent novae. Has anyone attempted this?