This story was told to me October 2016 by a Zanesville, Ohio resident who had been contracted in the 1970’s to clear 10-miles of forest for an oil pipeline in West Virginia.

Between St. Mary’s and Pennsboro, West Virginia, a helicopter moved 500-feet above the projected pipeline right-of-way through 10-miles of forest owned by the West Virginia Paper & Pulp Company.  Every 100-feet the helicopter would hesitate as a small object was dropped out the side open door.

Two men worked inside the chopper open door with a container of fluorescent paint and a large box of rubber condoms. Working in tandom, one man would fill a condom with glowing pink paint. The condom would be handed to the second man who, at a signal from the pilot, would drop the condom out the door. Paint spattered on and through trees below, colorfully marking the projected pipeline path. The contractor in charge of clearing the path would use the paint markers to guide his crew.

The USGS map segment below illustrates the St. Mary’s and Pennsboro, WV region. A  full map is located at: http://pics2.city-ata.com/city/maps3/cms2095.png. 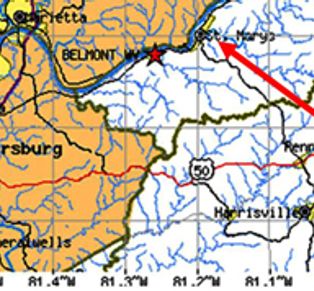 The contractor clearing the land did not want his name in print. He and his experienced crew knew how to efficiently clear the land.  Having a tight deadline, they worked 14-16 hours a day.

One late evening around midnight, the contractor was on a tractor clearing brush to allow for easy access by loggers. He had two small lights at the front of the tractor and a small one behind. As he worked, someone fired multiple shots at the tractor and put out the lights. Shots flew past his head. The contractor immediately slammed on the brakes, grabbed his shotgun, and ran into the brush. He waited silently, barely breathing. He thought he might die.

Within ten-minutes he heard someone walking very slowly toward the tractor. A man holding a double-barreled shotgun cautiously approached and walked around the tractor. When the shooter stopped beside the tractor seat, evidently looking for blood, the contractor jabbed his shotgun into the man's gut. The shooter started screaming, “Don’t shoot! Don’t shoot!”

Being a Christian and God fearing man, the contractor would not kill his attacker. As the attacker screamed, the contractor observed a grubby, middle-aged man dressed in a tattered shirt, dirty overalls, and muddy work shoes. The man was unshaven with a disorderly appearance. The ground on which they stood was owned by the lumber company. The contractor had a legal right to be on that land. The intruder did not.  Keeping his firearm jammed against the intruder, a tentative conversation began.  It ended with the two men talking like friends. The relieved intruder explained his carefully planted and tended marijuana farm had been established at that location for years. He admitted to trespassing on West Virginia Paper & Pulp Company land. With the limited light on the tractor, the contractor had not been able to tell one plant from another, not that it would have made any difference in his objective to clear the land.

The shooter introduced himself as a well established lawyer from Pittsburgh. His log cabin was built on his own property and rested about 70-feet outside the lumber company property line. The contractor was invited to the cabin for a drink of moonshine which the lawyer called “white lightning.”

As the two men talked, the contractor was given a tour of the house. The lawyer discussed how water was captured upstream and gravity-fed into a house tap. The water was moved into the dwelling through an indoor, wall-mounted pipe which had an on-off lever/switch in the kitchen. The house contained a full bathroom with bathtub, sink and toilet, but no water. The only access to water was the kitchen pipe. The lawyer showed the contractor how the toilet emptied into a hole cut in the floor. Anything that dropped through the hole ended up beneath the cabin where pigs were kept. The pigs efficiently consumed all excrement. The toilet was never flushed. The sink and tub had no water and were not used. The indoor bathroom was basically a West Virginia style outhouse.

Departing in a friendly manner, the contractor told the lawyer he would return in 2-days. The lawyer was advised by that time the marijuana had to be removed or would be destroyed. The contractor mentioned the need for a crew to cut a 40-foot wide path through 10-miles of deciduous, hardwood trees for the future oil pipeline. The thick, old forest trees included many species of ash, beech, birch, cherry, chestnut, maple, oak, poplar and walnut.

The contractor wanted no money from the wood. Whoever cut the trees could keep all the revenue generated by the venture and would receive a cutting fee. The trees had to be cut low to the forest floor in order to allow pipe-laying machines easy access to the land. Stumps and roots were not to be removed as land had to remain hard. Removing stumps would soften soil and make pipe laying more difficult. The lawyer stated he would have logging crews on the job in two days.

When the contractor returned two days later, no marijuana plant was in sight. With surprise, he saw over fifty, rough-looking, peaceful lumberjacks all garbed in worn and faded overalls. Different ages of men were represented sporting beards of every length. A chuck wagon had been brought in along with a few women who were helping prepare meals. Ten-teams of large, well-trained horses were part of the assembled mass along with their trainers/owners. The lumberjacks brought hand saws ranging from two-man saws to long-bladed one-man saws. No power equipment or motor vehicles were used. No safety gear was in sight.

Illustrated to the left is one type of two-man saw used by the lumberjacks.

Trees were in the process of being cut at a height of 2-inches or less off the ground. That height was requested in order to allow equipment to easily traverse the land when laying pipe. With little waste, the cutting notches were less than 3-inches wide. Wedges were used to help fell the trees. The 1950's image below from the South Carolina Forestry Commission shows the low height at which notches can be made in trees to fell them. Read more at: https://www.state.sc.us/forest/scindust.htm

Well trained horse teams were used in roping and pulling trees while being cut. Once downed and trimmed into useable lengths for transport, horse teams pulled the tree sections to a site where they could be transported to the nearest lumber mill. 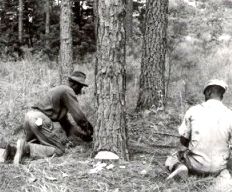 The contractor was surprised the lawyer had been able to assemble such a large, experienced group of lumberjacks within two days. They worked efficiently with little waste of lumber. They worked sunup to sundown without taking breaks. Every man knew their multiple jobs in clearing the forest. Trees were dropped, cut into moveable timber, hauled out by horse teams and land cleared of debris. Every living thing growing higher than 2-inches was removed.

The lumberjacks camped nearby each night throughout their progression through the forest. As the contractor grew to know the friendly lumberjacks, he was often invited to partake in their meals and moonshine.

After the logging teams removed trees along the 10-mile pipeline track and left the area, the contractor remarked that the land was so clean,  it appeared to have been raked. He said, “Over fifty lumberjacks and equipment were working within two days. I didn’t think it was possible to find that many experienced lumberjacks so fast. The lawyer did what he promised and saved my crew a lot of work.”

I added, "I'm sure the lawyer made a good profit from the deal."

My friend nodded his head, laughed, and said "I'm sure he did!"