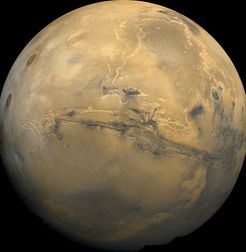 In September of 2015, the Mars Atmosphere and Volatile Evolution mission (MAVEN) discovered high-altitude dust surrounding the planet Mars. According to an 18 April 2015 Science News article by Christopher Crockett, planetary scientist Bruce Jakosky (of the University of Colorado at Boulder and working with the MAVEN project) was quoted as saying “This was completely unexpected.“

My question is, “Why would that be unexpected?”

In my early astronomy instruction I was taught that atmosphere had been described as “that gaseous envelope of matter that surrounds the Sun and in which the planets are imbedded.”  It would be logical to think that planets with greater gravity would have thicker atmospheres. Mars has gravity less than Earth. Because of less gravitational attraction to objects, it seems logical that nano-particles suspended within the Martian atmosphere would not be pulled to the planet as quickly as the particles suspended within Earth’s atmosphere.

Over the years, equipment used to study objects in outer space have become more efficient and better constructed.  Many years ago I read a science journal article, most likely about a Mariner craft, which discussed a Martian planet-wide dust storm with high velocity winds obscuring the surface. Due to the rate at which the storm covered the planet, the article stated the winds were estimated to be over 600-miles per hour. You can see from the Hubble photograph below a picture of Mars with and without a global wind/dust storm. The wind speed fact impacted on my memory as I compared that wind speed with those of Earth hurricanes and tornadoes.

Note the picture of Mars experiencing a dust storm and with clear skies as found at: http://science.nasa.gov/science-news/science-at-nasa/2001/ast11oct_2/. The Hubble Space Telescope took these pictures on 26 June 2001 and 4 September 2001 which illustrate how the planet could become enshrouded with dust. To think that all of it would quickly fall to the surface would be rather short sighted. Take for example the 7-cubic miles of dust and an estimated 20-million tons of sulfur which was shot into the Earth’s atmosphere by the 1883 volcano Krakatau located in Indonesia. That material made the sunsets blood red for over eight years. There are probably remnants of that eruption still orbiting Earth in the upper atmosphere. 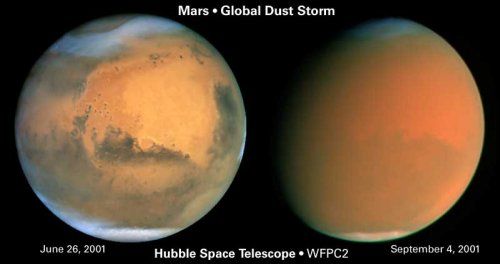 The fastest tornado wind speed on Earth was clocked at ONLY 318-miles per hour in 1999. http://usatoday30.usatoday.com/weather/tornado/wtwur318.htm.  Short lived Earth tornados have only half the velocity of a violent Martian wind storm. NASA reports that Viking Landers in the 1970’s (http://quest.nasa.gov/aero/planetary/mars.html ) recorded average wind speeds of 20-miles per hour with a maximum of 60-miles per hour.  If the earlier wind speed of 600-miles per hour was correct, NASA must plan for them, even if they are “100-year storms.” Such sustained storm winds would destroy most human habitats constructed on the surface of that planet. So, where would humans live?

I realize that early data obtained from outer space measurements may not have been as accurate as data of today with currently used better equipment and telescopes. If such an extreme storm does occasionally occur and is planet-wide, humans could not safely live on Mars unless their habitat was constructed in an area protected by the wind or underground.  On Earth hurricanes and tornadoes causing death and destruction are short in duration. A normal storm on Mars with lower wind speeds would be survivable but not the extreme storm with sustained winds hundreds of miles per hour lasting several months.

It would be interesting to have deep Martian core samples to analyze past sedimentation from storms. It is possible that nano-sized debris particles blown into the atmosphere during Martian storms may be suspended there for centuries. The gravity of Mars, as mentioned earlier, would allow the particle suspension over a much longer time than those in Earth’s atmosphere.

The larger atmospheric dust particles will have fallen out to create sediment layers planet wide. By analyzing a deep Martian core sample perhaps geologists could determine frequency, severity and longevity of Martian storms. The surface of the planet with its constant and prevailing winds would not show the true measure of dust accumulation from storms. Perhaps it would be best to extract core samples located within a meteor crater where the dust falling from the atmosphere would be more protected.

My first thought was to drill for core samples of Hellas Planitia or a smaller meteor crater. Not only would you obtain more accurate core samples from an area not experiencing the prevailing Martian winds, but humans may be able to better survive extreme storms if protected by crater walls. If you travel down into the depths of Earth’s Grand Canyon you find the temperature increases. The Martian crater basins may also create warmer temperatures for humans to enjoy on the cold planetary surface. Perhaps build the habitat along a protected edge of the 4-mile deep and 1,300-mile wide Hellas basin.

To determine the history of such dust storms scientists may want to obtain some drill cores within Hellas crater. The different wind storms would leave deposits of dust material within the 4-mile deep crater. Such core samples may provide evidence on the sedimentation from airborne material. From that data the frequency of severe storms on the Martian surface may be determined. With that data they may provide a hypothesis as to how often the most severe storms occur. 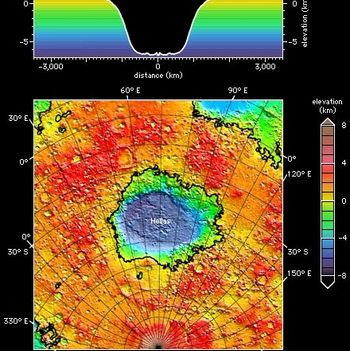 The only wind patterns I’ve seen within Hellas during winter in that hemisphere showed a high pressure area in the center with winds moving outward to the high walls. Below is the DSO/NASA Astrophysics data diagram by Antoniadi of counterclockwise wind directions in the Martian southern hemisphere. Note that winds in the northern hemisphere are primarily clockwise. There is a high pressure area centered in Hellas crater with air being pushed outward toward the edges. 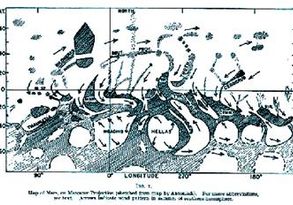 With analysis of Hellas there may be areas of large enough rock masses to create shelter from Martian winds. Hellas is rugged and deep, but it is so large there will be microclimates within it. I would like to see more climatological data from within Hellas. It may be that the edges of Hellas crater may be more protected from horizontal storm winds from the land above it. Yet there may be more severe downdrafts.

The Martian atmosphere may be similar to that of Earth when discussing optical clarity. When Earth's atmosphere and the particles it contains is discussed I think back to one of the early NASA flights. There was one astronaut on board the rocket leaving Florida. It could easily be seen by spectators and by cameras. The rocket looked beautiful from Earth. When a NASA engineer asked the astronaut to describe how the NASA site looked to him, he replied it couldn't be seen due to the cloud cover. The engineers were confounded as they saw no clouds from Earth. That's when they discovered the one-way optical clarity of the high altitude, cirro-stratus clouds made from ice crystals. From Earth if there are no cirro-stratus clouds the sky will appear to be a dark blue. It is rare to see such deep blue, clear skies.  Jim Wark, an internationally famous aerial photographer ( http://airphotona.com ) once commiserated with me that haze and smog free days in the United States are rare. He refers to haze as wildfire smoke, dust, moisture, ozone, pet dander and "all that other atmospheric stuff." He said haze and smog free days occurred in the 1970s & 80s 5-6 times per year and were later reduced to only 2-3 days per year. When they did occur, he took opportunities to fly his airplane around the United States taking rare CLEAR pictures of our beautiful country. Besides being an excellent pilot and photographer, he's a true gentleman. Check out his site to enjoy the United States from his perspective.

To help readers learn more about Mars formations I have included the cut out below. Copy it to a word document and enlarge it to work with more easily. Enjoy! It was obtained from the United States Geological Survey. 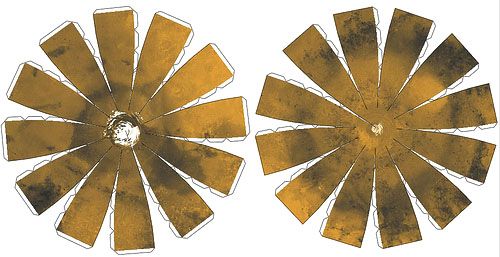