The next total solar eclipse in the United States will take place on 8 April 2024. It will make a narrow path across 13 states and be visible as a partial eclipse in other states. Since the Zanesville Astronomy Club sponsors this page, we will discuss primarily the viewing and happenings in Ohio.

There will be many maps available in the future for this event. In this map of Ohio, the centerline is the line of the totality. If you were on the ground at that center line location, you would be at one of the prime locations to view the total solar eclipse.

Ensure you have safety lenses to protect your eyes. 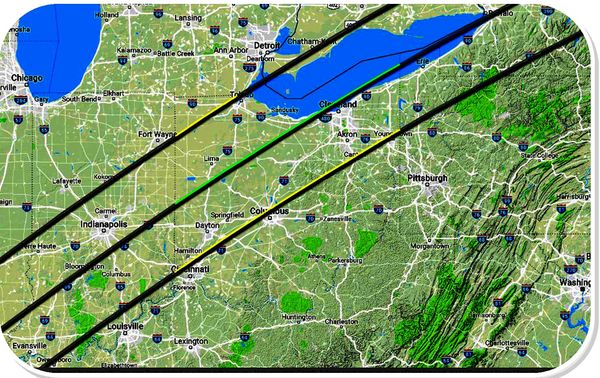 The Zanesville Astronomy Club is expecting to receive the free solar viewing lenses again. The last time,  ours were provided by Google, NASA, the NASA Night Sky Network and different optical/medical organizations.

The local libraries handed out lenses as did some businesses. Our club only had about 600 which were handed out after the presentation at Ohio University Zanesville with Chuck Bruckelmeyer and myself as keynote speakers. I expect we will host another event at Ohio University Zanesville to present information and hand out lenses a week prior to the event.

The width of totality averages 146 miles.  I'm not sure what it will be for the 2024 event but I will try to find out. The above map gives a rough idea of where you should be.  Note that all of Columbus is NOT in the totality area.  You would have to be in west Columbus to see full totality.  Outside the three lines on this map, you would only see a partial solar eclipse.

NASA considers Cleveland, Ohio the best place to be in our state for viewing the eclipse.
In some locations totality will last 4 mnutes 24 seconds.

A word to the wise.  When the last total solar eclipse took place in the United States, the nearest clear viewing to Ohio was Tennessee. Everyone arrived in Nashville at different times. However, after the eclipse everyone left at the same time.

Members of the Zanesville Astronomy Club who drove to Tennessee reported that interstate traffic was bumper to bumper with speeds 10-15 mph. After traveling several miles, the Bruckelmeyer family headed west to Indiana to get out of traffic. They reported ALL roads were congested.  It took them 13-hours to drive home.

The Zanesaville Astronomy Club will try to have as many lenses available as possible.  Everyone is asked to NOT look at the Sun at any time without proper eye protection. Light causes cataracts. Be proactive and protect eyes of children, others and yourself. Children should be wearing brimmed hats and sunglasses whenever in sunshine.

Irene Baron & Chuck Bruckelmeyer passed out 600+ lenses before the last solar eclipse seen in Ohio after  explaining the eclipse. OUZ staff reported the standing room only audience was the largest attendance ever experienced at the university.