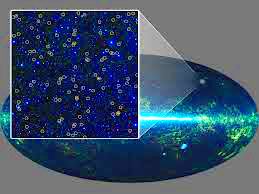 This is the image released by NASA with reference to the newly found bonanza of black holes, thanks to NASA/JPL and Caltech/UCLA.

Several theories surfaced at that time as to the cause/creation of black holes.  Some physicists and astronomers suggested the black holes were the results of explosions and then implosions of massive red supergiants.  They hypothesized that when the atoms were pulled into the high gravity mass, they were packed so tightly that all space between the parts of the atoms were removed.

When comparing the structure of an atom to that of our Solar System, that compaction could be compared to first bringing all the Sun’s atoms together after removing the spaces between the nucleus and electrons. Then all the planets and other objects, including that matter contained in the Edgeworth-Kuiper  Belt, would be pulled into and packed into that one solar mass.  The amount of gravity of each item would not increase for the mass of each particle of the atoms composing it would not change. They would just be more tightly packed together. The overall gravity of the total Solar System mass, which formerly had extended millions of miles into space, might be contained in that central compacted mass, perhaps filling a tablespoon of very heavy and extremely dense matter. Those old theories have been discarded.

It was thought at one time nothing could escape from a black hole. At one time, it was thought some of the jets of energy being emitted were in the form of X-rays or radio waves. However, in 2001 scientists saw evidence of energy from a black hole given off like moving magnetic field lines.  This month I saw for the first time information about the “bonanza” of black holes discovered by  NASA’s  Wide-Field Infrared Survey Explorer, the WISE telescope operated by JPL.  I was very impressed. What was formerly theorized has been proven to exist.   Evidently they photographed in infrared what could be millions of black holes!

The WISE survey was completed in early 2011.  Information was released publicly in order to allow scientists access for study. Next, the Nuclear Spectroscope Telescope Array, NuSTAR, was used with electromagnetic field X-Ray frequencies.

My former  students loved discussing the mysterious black holes. They loved to express their ideas and would hypothesize about them. Since they loved astronomy so much as high school students, I hope they are keeping up with the latest NASA discoveries.

I sincerely applaud NASA for their educational outreach programs and the magnificent efforts they make in educating the public concerning their research results.

Reference the energy given off from a black hole, see link: