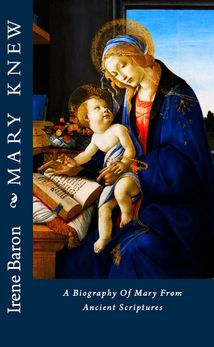 Irene Baron [say: I-rene Bear-on] is author of MARY KNEW-A Biography About Mary From Ancient Scriptures. Many people have questioned who Mary was. Ms. Baron answered their questions in her book. She wants you to know that Mary was NOT just some teenager off the street. You can learn more about Irene Baron at her website, www.irenebaron.com. Welcome Irene Baron. What's the most important facts about Mary you want our audience to know?

QUESTIONS:
Why was Mary was chosen to be the mother of Jesus Christ?
Who were Mary's parents"
Who was Mary?
Why does her story fulfill prophecies?
Why were there so many angels in her life?

BRIEF:
Irene Baron began studying ancient scriptures as a teenager by borrowing books from local churches and personal libraries of many pastors. When NASA sent her almost 70 astronomy computer programs, she researched information about ancient astronomers and their beliefs. With that information and after several years of working with the astronomy software, she discovered the Christmas star and wrote about it in the book, Unraveling the Christmas Star Mystery. Ancient scriptures continued to intrigue her as scrolls several thousand years old were found, translated and studied by experts.

An internationally famous song was produced in 2017 asking questions about Mary, the mother of Jesus Christ. Baron found that most people had no idea who Mary was. To correct that lack of knowledge, she researched ancient scriptures, compiled information, and created a historical narrative to make those scriptures understandable by present-day readers. She produced the book, MARY KNEW- A Biography About Mary From Ancient Scriptures.

WRITING CREDENTIALS:
Author of award-winning book, Unraveling the Christmas Star Mystery.
It was recognized as the exemplary Christian education book of the year it was published. Irene Baron used NASA provided software to locate the Christmas star. Having taught science & astronomy, she understood the movements of the night sky.
Researching ancient astronomy and astrology symbols and symbolism enabled her to understand the full message God provided.

She has studied ancient scriptures for many years and found them fascinating.
She found many ancient scriptures that tell Mary's story which is full of angels and miracles. They are not in the New Testament which was limited to books about Jesus Christ, not his mother

ending with: How can our listeners learn more about Mary and her parents, her angels and miracles? 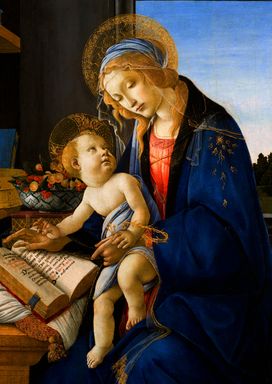