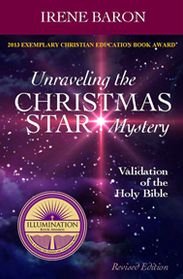 1.  What gave you the idea to research the Christmas star?
I’m curious by nature and enjoy finding answers to questions. Since I’m Christian and love astronomy, it was a logical quest. What really gave me the incentive was when I received 68-NASA astronomy computer programs.  That was an unexpected and timely gift!

2.   What was difficult for you during this research?
In my ignorance, I thought just finding a significant celestial event would answer my question.  I didn’t take into account the fact that the star event had to match or correlate with the symbols and symbolism interpretations used by ancient astronomers.  That correlation added a tremendous amount of research, reading and study.

3.  Where did you find that ancient symbol information and references?
After studying books and reference material about ancient astronomy symbols and symbolism retrieved from libraries across the nation, I had almost 100-references. They are listed in my book.

4.   How long did your research take?
About three-years.  As a single mother working full time, I ran the astronomy computer programs at night.  I graded papers and prepared school lessons as some of the computer calculations took hours for one digital request. Much time was spent trying to find the correct programs in order to duplicate my findings. Being a science professional I knew any experiment had to be duplicated successfully to be considered acceptable. The research for the ancient symbolic interpretations of the celestial events took concentrated study.

5.   How did you feel when you finally discovered the Christmas star?
Excited!  I was thrilled when everything came together. It was fulfilling to find the event matching/correlated with the ancient astronomical symbols at the exact latitude and longitude above Bethlehem and at the time of day the astronomers studied the stars.

7.   I understand you found other significant astronomy events concerning the birth of Jesus Christ. Can you tell me about them?
Knowing that Ancient astronomers did NOT study the stars at night but in predawn skies, using that time frame I discovered nine other celestial events occurring just prior to the actual Christmas star.  These events were the ones that told WHO was being born. Two thousand years ago, every light in the sky was believed to be a god. When the movements of these other gods showed them bowing before the new God, the astronomers would have known the new diety would become the greatest God in their universe.

8.   What did Wisemen think the Christmas star was?
The actual Christmas star was just a position marker. After the birth event had been announced in the skies through earlier star movements, the final Christmas star showed the birth location. Like a modern-day Global Positioning System (GPS), the Christmas star predicted and gave the geographical location of the holy birth. The ancient symbols and symbolism for star movements were originally invented by the Babylonians 4,000-years ago and used for thousands of years by astronomers in other countries. Many are still used today in the false science called astrology found in daily newspaper horoscopes.  Using historical interpretations, the astronomers of Christ's time in history would have predicted that the new God to be born on Earth would become greater than any of their other gods. He would become the greatest God in their known universe.

9.   How would knowing there was a new God have affected the ancient astronomers?
They probably trembled with excitement. They knew the greatest God to ever be born in the universe would be born during their lifetime. Observing and studying the stars as they did, they knew years in advance what would occur.  Following tradition, astronomer Wisemen would have advised their rulers of the event. That would have begun preparations for diplomatic visits to the birthplace. The new God would be greeted by emissaries representing the kingdoms and presented gifts to honor Him. The emissaries/Wisemen visiting the new God, named Jesus, were perhaps the first gentiles to honor and worship Him.

10. In your opinion, why were the emissaries called Wisemen?
Current day astronomers are considered among the most intelligent scientists along with theoretical physicists. In ancient times, they were the most learned men of their kingdoms. They were most likely called Wisemen due to their intelligent brilliance.  Other names given the wisemen over the years have included alchemist, astronomer, astrologer, cosmologists, magi, magician, mathematician, priest, skywatcher, and wizard.

11. What computer programs did you use?
I began with the 68-computer programs NASA sent me.  They were created by NASA astronomers and mathematicians. They arrived separated in two packages and were received on two different days. The program names are listed in the references.

12. How many years of ancient skies did you study and survey?
About fifteen. The topics/years researched overlapped.

13. Were you looking for a star or something else?
Mathematical astronomy facts prove the Christmas star was not a nova (an exploding star). No comet orbits have been found that correlate with that date and position. It had to be what the ancients called a star. They called everything in the dark sky, except the Moon and Sun, a star.

14. How did you know you found the actual Christmas star?
It’s an important fact that astronomers of 2,000-years ago used predawn for their observations. Therefore, the brilliant event had to appear in the predawn hours exactly over the Judean city of Bethlehem. I used the exact latitude and longitude of Bethlehem and 6:00 AM in that time zone as my search prerequisites. Anything I found had to fit within those parameters.

15. What did you do when you finally found the Christmas star?
I corresponded with the directors of observatories and planetariums internationally who requested my results through email.  My scientific research proved the Holy Bible was true. I wanted to share that fact with the world.

16. Why didn’t you publish your result right away?
By then I was working on my Masters degree at Ohio University and had little time for other endeavors.

17. What is important to know about your research?
The actual position marker Christmas star event happened just like it was written in the Bible. The facts prove the Bible's Christmas story is true.

What is also important to know is that additional events were earlier predicted by the ancient skywatchers that explained to them exactly how powerful their new God would be in addition to where He would be born. By the time their predicted events began to happen, they were prepared to welcome their new God. These were brilliant mathematicians so familiar with the way their stars moved in perfect and precise patterns, they could predict what would happen years before the event took place.

The position marker Christmas star did not tell who was being born. It only told WHERE the birth was to take place.

According to a Bible prophecy, one group traveled partially by ship. I suggest they were from India or China, both of  which had astronomers with advanced knowledge of movements in the night skies. Travel for that entourage over sea and land took perhaps a year or more. As you read my book, imagine the preparations that had to be made for everyone traveling with their kings, emperors, Wisemen, and all their support persons needed at that time in history. WOW!

I would like everyone to use their imagination to picture the hardships the visitors to Bethlehem had to endure to witness the new God at His place of birth. The actual birth was unlike any human birth. Read about it in the book: MARY KNEW - A Biography of Mary from Ancient Scriptures.

Use your imagination to understand the arguing that took place before the event as people maneuvered to be included in the welcoming party to visit the new God. Imagine the stress involved as these diplomats/kings/rulers/Wisemen/astronomers worried and debated as to what gifts to take, how to present them, who would present them, what they would wear in front of this new God, what support people would have to be included in the entourages/caravans, how many language interpreters would be needed, how far would they have to travel, how would they be protected from attacks/robbers, how long would the trip take, and how much would all that cost?

SOCIAL SITE SHARING NOTE:
This domain host for mindreacher.net and irenebaron.com does not offer Facebook, Twitter or other logo 'widgets' to share one of my pages or blogs to YOUR sites with one click. Currently, to share one of my pages to your social site, copy the URL at the top of the page you wish to share, go to your social site, enter the URL on your social site post area (along with your comment if desired) and then post/share. I deeply apologize for the inconvenience.  I will so appreciate your sharing my pages.
Thank you for your understanding and patience at this time.