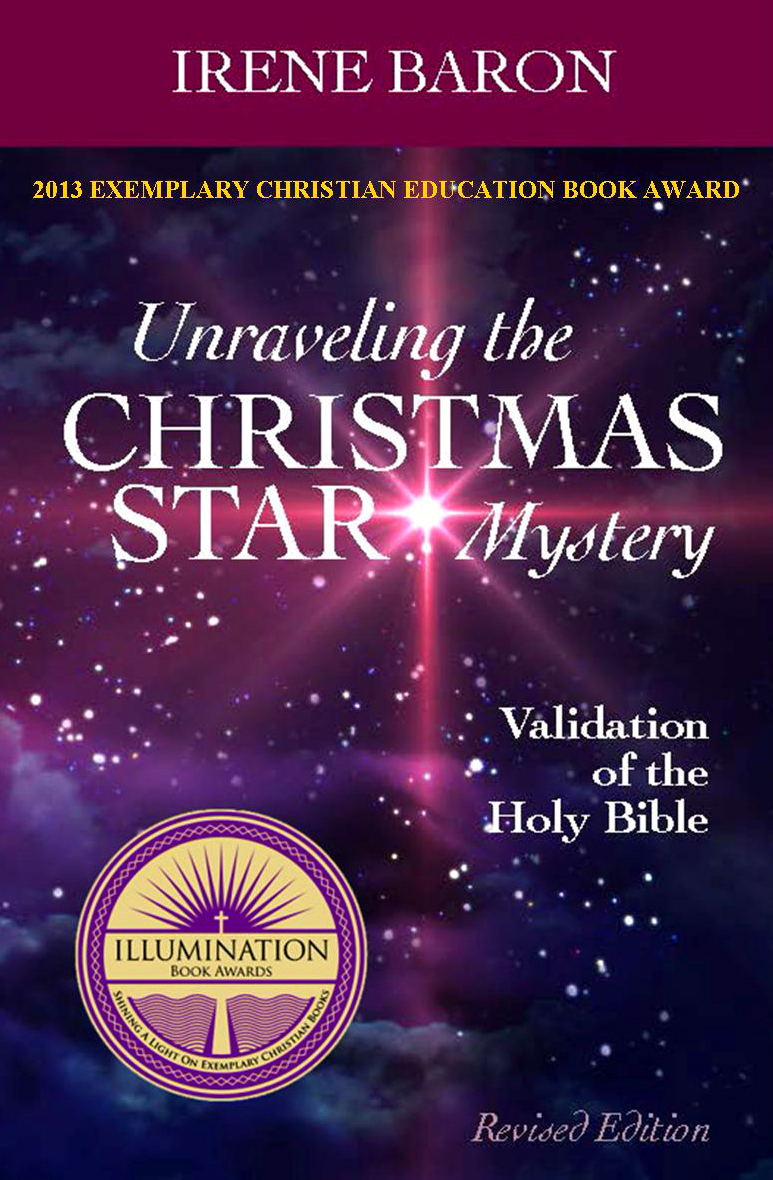 NOTE: Irene Baron was recently named "Top Female Writer of the Year 2020" by the International Association of Top Professionals (IAOTP)

The Christmas star has been identified using NASA astronomy programs.

Significant star events that occurred in the preceding months, verified with additional computer programs, describe the importance of the first God to be born on Earth. The last event, like a modern-day GPS, gave the geographical position for the birthplace of Jesus Immanuel. This research proved the event as written in the Bible is fact.

Written for understanding by readers ages 12 and older, it is an accurate and spellbinding account of the Christmas star phenomena. Basic astronomy is included in the book. The findings are based on proven astronomy computer programs, historical records, carvings and illustrations on ancient monuments, coins and legal seals dating back over 2,000 years.

The illustrated book, Unraveling the Christmas Star Mystery, was awarded the First Place Gold Medal as the 2013  Exemplary Christian Education 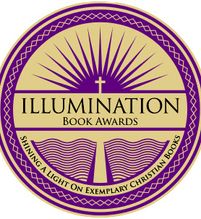 Book during the Illumination Book Awards sponsored by the Jenkins Group. This award was designed to honor and bring increased recognition to the year's best Christian Education title written and published with a Christian world view.

“This is a significant historical discovery for Archaeoastronomy,” author Irene Baron said. "Movements of the Sun, Moon, planets and stars create precise and repeatable mathematical patterns. The patterns have allowed ancient and modern astronomers to predict what would happen in the night skies. Modern computer programs can create exact replicas of star patterns for any instant in time thousands of years in the past or future."

KATHLEEN ORMOND  ★★★★★
Goodreads. This is a fascinating record of astronomy and historical facts to help us understand the timeline of the Christmas Star at the birth of Christ. An inspiring read!

TOBI MILLER  ★★★★★ I just finished your wonderful book about the Christmas star, all the time wondering how you could write such an in-depth, technical book. Until I read, near the end, that you were an astronomy professor for 30-years. Then it became clear and I’m very impressed, to say the least.

JIM WORKMAN ★★★★★ You did a very nice job explaining the basics of astronomy and presenting the way the ancients studied and interpreted the “stars”. Your discovery that the ancient “astronomers” typically took their sightings at dawn is a real contribution. That should help in all types of historical and archeological studies. I’ve always heard people wondering about conjunctions, speculating about supernovas etc. Your careful explanations of how the expectation and conformational sightings of the ten solar system events would have been interpreted by and would have motivated the ancients seems to me a genuine contribution and eliminates the absurdity of starlight focusing through a barn window, or thereabouts.

H. LEWIS, M.D.★★★★★ Unraveling the Christmas Star Mystery is a thorough, accurate and spellbinding account of the Christmas Star phenomenon based on numerous NASA computer programs, Biblical passages, historical records, illustrations on ancient monuments, coins and legal seals dating back three thousand or more years.The scientific data with ancient observations and beliefs form a precise explanation of the birth of Jesus and the associated phenomenon of the Christmas Star. This text is a good source of information for the scholar, teacher, and population in general. Recommended highly for Biblical Scholars.

AMAZON.COM ★★★★★ This book helped bolster my faith, made me believe in the Christmas star and had me thinking more thoroughly about what it must have been like in the year preceding Christ's birth. All around a great read, especially during this time of year.

BETTY WEICHERT ★★★★★ December 2013.I'm amazed at all the research you've done to write the mystery of the Christmas star ... and put all that information in an understandable book for the non-scientist to understand. It's really fascinating to see how the planets move around and create the patterns they do. You made it so clear! I really like the drawings - helps so much to follow the reading material.

AMAZON.COM ★★★★★ I think this is a well-written book with a viable and interesting theory as to not only the truth of what the Star of Bethlehem was, but also detailing a listing of several celestial events leading up to the birth of Christ. These additional events served to alert the Wisemen who traveled to meet the Messiah.”

AMAZON.COM. ★★★★★ This book is written for a very wide audience, which I think makes it a wonderful book that could not only be appreciated by an adult audience but also easily used with an audience as young as middle school. This opens up a lot of possibilities to use this in Sunday school or with youth groups, which were a big part of my childhood.

AMAZON.COM ★★★★★ I appreciate that Ms. Baron kept the book at its current length, which made it a light, fun and interesting read. I would recommend this book to almost anyone with a 6th grade or higher reading level. I could also see this book being read by Christians undertaking a homeschooling path.