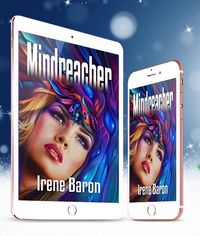 Once I started reading, I couldn't put it down.
Catherine Frompovich, Editor

It was difficult to differentiate between fact and fiction. A good read.
Vicki Whitacre, M.D.

This novel reads like a blend of Clive Cussler and Indiana Jones. Full of excitement!
Sandy Wickersham McWhorter, Editor

I was fascinated to learn so much about the human mind. I didn't want it to end.
Kathy Brantley, Reader

You are like Michael Crichton reborn!
J. Kern, Reader

Time for another indie book review and let me tell you this one was mind-blowing! This intense science fiction thriller will make you question everything you thought you knew about psychic ability all while taking you along to thwart terrorist attacks with the power of the mind. Extremely thought-provoking. Will make any sci-fi thriller junkie jump with glee.
Theophanes Avery, Author

5.0 out of 5 stars
A terrific geopolitical sci-fi thriller.
Mindreacher is a top-notch geopolitical sci-fi thriller that is epic in its scope, truly original and encyclopedic in its details. Irene imbues the novel with ideas that only someone with her amazing personal biography could bring to a novel of this kind. This is the second book of Irene's I've read and this one, like her Mary Knew, is written with such clarity that even the most complex concepts are very easy to grasp. In Mindreacher the United States faces nuclear destruction by terrorists unless a mindreacher - a person with telepathic power - can be found to assist in locating the terrorists. Enter a U.S. Marine who adds dash and heroism to the story that expands the globe. Remarkably, at the back of the novel is a detailed glossary and five pages of references (Did I mention the novel is filled with facts?). I highly recommend this book.
Steve Carr, Author

5.0 out of 5 stars
A great summer read. I think this story was unique in that it portrayed a character with extraordinary mental capabilities who embarked on a worldwide adventure to find others with similar capabilities in order to combat terrorists. I highly recommend this book.
J. Worthington, Reader

5.0 out of 5 stars
I can't believe more people haven't discovered this intense sci-fi thriller! …I was swept off my feet by a far more complex scenario. … what startled me about this story was just how different a path it took. It is loaded with psychological and scientific intricacies that really make you wonder. For instance, if a group of children is telepathic what would that mean for their learning capabilities? Their emotional and intellectual growth? Their behavior? Would they even bother to speak verbally? It's a bit like Jurassic Park but instead of dinosaurs its psychics. The science is dense and the ethical complications are thought-provoking. This book will change everything you think you know about psychics. I highly suggest this to anyone who loves science fiction or is interested in psychics.
Theophanes Avery, Author