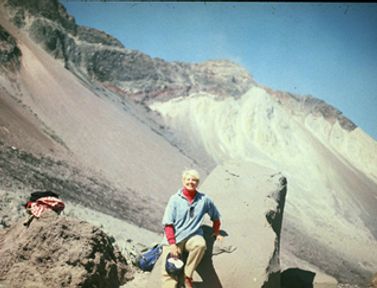 Since moving back to Ohio this last spring, I had trouble getting my Epson Stylus PHOTO printer to work.  Thanks to the excellent Epson Technical Support team, it is up and working!  I have some homebound and computerless people who appreciate the latest news and photos, so it will get a lot of use.

This Epson is the printer I use in my aerial photography business when photos are needed.  Usually I just place everything on a disk and overnight it to the buyer. Thank goodness for Fed-Ex and UPS.

One of the first photos I printed off for a friend is this one taken inside the crater of Mt. St. Helens.  This was taken a couple years after the eruption, but I needed the photo for an article I am writing.

Being polite and patient, I let other anxious teachers go in the first two flights where the participants got to spend 30-minutes inside the crater.  I was on the last flight and found there was no rush to get back to the landing site.  Consequently, we were able to stay over an hour.  I was so excited to be experiencing this, thanks to the National Science Foundation grant and fellowship given me for the experience. They provided for all the university classes at Portland, Oregon and all travel expenses.  This was one of several fellowships I recieved to learn more about earthquakes and volcanoes.

What was it like inside the steaming crater?  Exciting.  Out the rim where the side of the mountain blew away, you could see where the debris settled raising the ground level immediately beyond the volcano over 75-feet.  If you remember the elderly resort owner, Mr. Harry Truman (no relation to the President) was touted by the media for saying he wouldn't leave the site.  They made such a fuss over him, he probably became embarassed to even contemplate leaving the Mt. St. Helens area.  His lodge and property were right in the explosion path.  So as I looked out over that area, I knew he was under the debris field.  If it hadn't been for the media about Mr. Truman, he would probably have left and been safe.  Yep, I blame the media attention for his death.

Further in the distance of my view was the observation site of USGS employee Steve Johnson.  He tried to be relieved of his position to move to a safer site, but was denied permission.  After the explosion, his remains were never found. His partially melted cassette recorder was located nearby his position. There were many tragic stories about that volcanic eruption that went through my mind as I investigated the crater.

As you stood in the crater, you continually heard the fall of rock and boulders from the rim.  You had to be alert and find where they were and the trajectory so you could step out of the way if they were headed toward your location.  That was the part that made me wary for the falls were continual. What was so awe inspiring to me was to be able to pick up and touch rock that was just a few months old.  It was DACITE.  The rock looked like a very fine-grained granite of mixed white quartz and black hornblende. Hit with a rock hammer, it rang like crystal.  The USGS out of Seattle gave us permission to collect whatever rock we wanted, so I filled back pack, bags, pockets, etc with ash and rock.  The helicopter was loaded as we departed the site.

Interesting to note is that when Mt. St. Helens began waking up, so did all the other volcanoes in the Cascade Range.  From what I understand, they are still active and rumbling.  Associated phenomena has taken place. I was most intrigued when the center of Oregon lowered by several inches and then returned to the original elevation. Near LA in southern CA, Bear Mt. vegetation was dying.  It was found that gases from the magma mass was giving off gases that destroyed the tree roots. I try to keep active with all the happenings in vulcanology, especially with the Cascades. However, watching the magma move upward under Yellowstone National Park is extremely interesting. The top of the mass is only a few miles down.  The related changing surface phenomena there provides much evidence to ground temperature changes.

Mt. St. Helens was one of the many volcanoes I visited throughout the Cascade Range.  I enjoyed being at Mt. Shasta the night of a total lunar eclipse.  I was able to watch the eclipse with the lake reflecting the Moon. Beautiful!

The rocks I collected from the numerous sites were used to supply many schools throughout Ohio with rock and mineral collections. Through the National Science Foundation, my geology knowledge was improved.  My students were thrilled to have the experience of holding and examining rocks from all over the United States.  I had huge collections from minerals to sedimentary, igneous and metamorphic rocks.

On one trip I bought a US Army heavy canvas bag to hold the rocks.  I was taking the Greyhound bus to Ohio from Texas where I was enrolled in the graduate program for geology. The bag was filled with what I had collected.  Upon arriving in Zanesville, the bus driver offered to remove the bag from the holding area.  I said, "It's very heavy," and tried to warn him.  He did pull it out with effort and commented in a joking manner, "What do you have in here? Rocks?" I couldn't answer, but just laughed.