Titan is a natural satellite of the planet Saturn. Over the years there has been much speculation as to the possibility of Earthlings existing on the surface of Titan.

The current pressure of Titan’s atmosphere has been measured to be 1.5-times that of Earth’s atmosphere.

To determine how that excess pressure would affect you, measure the widest part of your hand by the longest part (from the tip of the middle finger to the base of the palm). Then multiply the two numbers to find the area. My palm it is about 4" X 6" or an area of 24-square inches. On Earth, one side of my hand receives 24 X 14.7 pounds of atmospheric pressure, or 352.8 pounds total.  To determine the pressure of the whole hand, double that to 705.6 pounds.My hand doesn’t implode because my body was formed to withstand the pressure.

On Titan, the current pressure on my hand would be 24-Sq. in. X 22.095-pounds or 530.28-pounds on one side of my hand. The whole hand would have to withstand 1060.56 pounds of pressure. Future pressure of Titan's atmosphere will change as our Sun evolves in its life cycle.

While the current temperature of Titan averages -179o C, when our Sun heats up and expands in about 5-billion years, Titan’s atmospheric temperature may become livable for humans.  The atmospheric pressure will also lessen as the now liquid and solid gases of the atmosphere change.  With the low gravity, some of the atmosphere may escape. Being on Titan a human would experience a light gravity similar to that of Earth’s Moon.

AS the Sun evolves, the surface is expected to expand outward as far as Mars, vaporizing Mercury, Venus and Earth. When Earth becomes too hot for the inhabitants to live in their cooler underground cities, they will have to either move their planet to a more distant and cooler orbit, or move themselves to another site.  I suggest Titan will be colonized.

If, as suggested by findings of the space probe Cassini-Huygens, Titan has a massive underground reservoir/ocean of water (H2O), the heating of the planetary object due to the Sun’s expansion may vaporize the now liquid and solid gases of nitrogen and methane. It will perhaps release much of that underground ocean liquid as oxygen and hydrogen, changing the atmosphere and making it more viable for human life.

Would there have to be terra-forming?  Perhaps. But at that time in our history, mankind should be so  much more advanced technologically that it will appear to be a viable solution.

Yes, Titan is smaller than Earth. It is the second largest moon in the Solar System after Jupiter’s Ganymede.  To give you an indication as to the size comparison, below is a picture of Titan between Earth and our Moon. Think about Titan and how it's going to change in the future.  Our whole Solar System is going to change! Lots of things about which to speculate! :-) 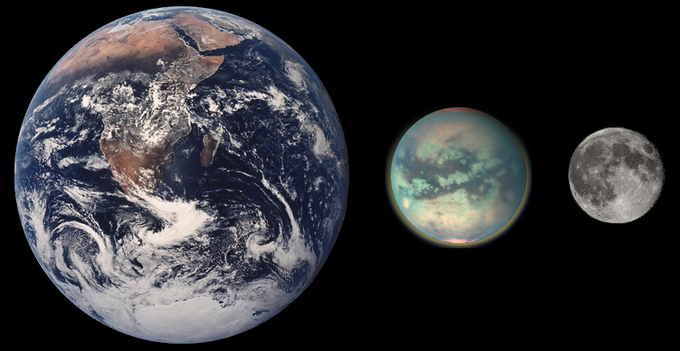 The next picture illustrates the possible interior of Titan showing the underground ocean.  Links to the photo credits are at the end of this article. 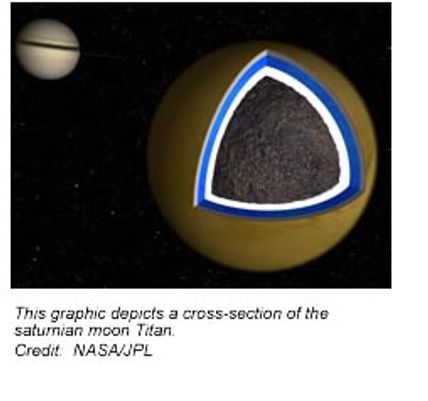