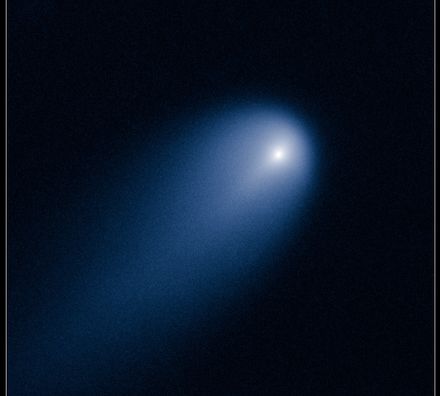 Comet ISON, predicted to be the largest comet in our written history, is coming. How large it will appear is anyone’s guess, for it has to blaze around the Sun during the journey through our Solar System.  As it nears the Sun, there will be more interactions between the comet sublimation particles and the solar winds. As the ice sublimates into gas, it will become fine enough to be blown to the opposite side of the comet. The more ice there is, the greater the sublimation and the resulting material being blown outward. If this comet doesn’t “fizzle out” like previous comets formerly predicted to be large, it will be one that will go down in history.

We don’t have temples dedicated to astronomy. We don’t keep our history and religious symbols carved into stone or on tapestries. Mankind will keep information about ISON on magnetic based electronic links, the Internet, hard drives, smart drives, Android phones, iPods, iPhones, Kindles, etc.  How long will the data last? Do you recall the black, floppy, square disks used in early computers?  Except those owned by a few collectors or in museums, there are no machines that will “take” them. We went to large disks, the CD and DVD disks, which are being replaced by small cards or miniature disks.  What next? Nano-size computer chips may abound as will the machines to read them.

The image presented here is one taken by the NASA Hubble Telescope.

If electronic records of ISON are not put on film, which can survive indefinitely, they will deteriorate. The data deterioration will come about naturally as the electronic data banks succumb to the interference exerted by the continually fluctuating and changing magnetic fields of the Earth.  The magnetic fields of the Earth are further interrupted and/or enlarged by the bombardment of materials from the Sun.  Such bombardments have been so great they have burned out radar, telephones lines and electronic equipment.

We can determine past and present positions of the Moon, Sun, planets and stars for hundreds or thousands of years, but not comets. Their orbits fluctuate when they approach larger planets that pull them out of their “normal” orbit.  Therefore, Halley’s comet does NOT arrive every 76-years on the dot. It is believed close encounters with Jupiter or Saturn pull it out of the intended path for the return times of the comet change. It was fortunate that the next revolution of that comet after Edmund Halley’s death was on time. The discovered manuscript Halley published listing the date  proved he knew comets returned and their orbits could be calculated. It was fortunate the comet was in the sky when the manuscript was rediscovered. The mathematical comet data confirming the orbit was determined by Sir Isaac Newton based on Halley’s observations. This was at a time in history when there were no calculators or computers. Calculations had to be accomplished by hand, or with an abacus.

What will happen to Comet ISON?  I haven’t heard yet when it would be expected to return. I do know we will be passing through the debris field of it’s orbit in mid-January 2014.  We should have some exciting meteors and meteorites when that occurs.  Many are predicted to be dust size.

There have been many Internet links to Comet ISON data. I have included below some which were posted the first half of June, 2013. I think you will enjoy them if you have time to peruse their contents. If you come across any predictions of ISON’s return, please let me know.

From Sky & Telescope, go to the Internet site for an article, photos and diagrams by John Bortle:

“All Eyes on Comet ISON”

“Big sun-diving Comet ISON might be spectacular in late 2013”

“New Images of Comet ISON Hurtling Towards the Sun”

“5 things to know about Comet ISON “