COMET ISON C(2012) S1 is not the same as most comets orbiting the Sun.

Most comets orbiting our Sun have originated in the Kuiper Belt and have been going around the Sun since the Solar System began. They have been around the Sun so many times much of their gas has been burned off and blown away by the Sun's powerful solar winds. Consequently, they are similar to one another in composition.

COMET Ison is from the Oort Cloud, further out. Some astronomers have speculated that the Oort Cloud extends far out into space, perhaps as far as Alpha Centauri. Alpha Centauri was long believed to be the closest star to our Sun, about 4.36 light years. That means, traveling at 186,000-miles per second (the speed of light) it would take 4.36 years to reach the star. Beta Centauri is about the same distance way and the second brightest star in that constellation, Centaurus. This constellation is visible from the southern hemisphere. 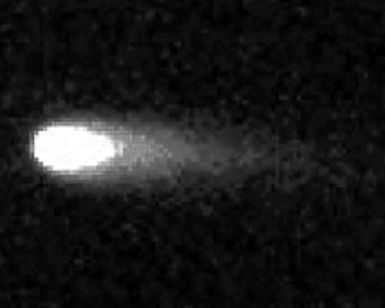 Since COMET Ison has not yet grazed the Sun in this first orbital pass, it may be composed of more elements making up the gas than the "average" comet. Scientists will use different instruments to determine what gases are present in the comet mass prior to the Sun approach and before the gasses are "out gassed" or burned off. One type of instrument used in the past has been the spectrohelioscope. The spectroheliograph is the instrument used currently in modern observatories.

At the bottom of the page is a diagram from which illustrates the use of the spectrohelioscope. It was invented by G.A. Hale (of Hale Telescope fame) in 1924.

Each element, when burned, gives off specific wave lengths of light. When all the wave lengths of a light producing/burning object are captured, they can be analyzed to find the individual elements. This is what produces the visible spectrum of a comet or star such as our Sun.

Students in classrooms can use a hand made spectroscope to view the light of our Sun through a diffraction grating. The spectroscope projects the image onto a black surface. Through the spectroscope the "fingerprints" of the elements composing the Sun are illustrated.

For student use (ages 9+) Stanford University offers VERY inexpensive and EXCELLENT spectroscope which students can construct. All you need is a smile and tape! You may find information at this link: http://solar-center.stanford.edu/activities/cots.html. This includes a poster of Sun on one side of the card stock and the spectroscope "punch-out" on the other side. Diffraction gratings are included. Educators can link the Sun spectroscope to that of Comet ISON as they teach about composition of celestial objects. This is a wonderful resource.

I have used this resource in my astronomy classrooms since the Solar studies first offered it to educators. When there were no school funds for the spectroscopes, I purchased them myself. I would always buy a classroom set of 45 to use several years for about $7.00. The order form is available at: http://solar-center.stanford.edu/posters/posters_spec_bulk.html.

To the left is the solar spectrum of Sol, the sun of our Solar System. It is similar to a normal continuous spectrum except for the black lines.  As the light is given off by the Sun and travels through space to the Earth, any element between the origin site of the light and the Earth will cause absorption of the fingerprint colors.  These are represented by the "black line" spectrum or absorption spectrum.  Stars from beyond our system of Sol, the Solar System, will have different absorption lines.  We can tell what elements the stars are burning by the different element spectral fingerprint colors exhibited in a spectrohelioscope.

I highly recommend interested amateur astronomers purchase several of the elementary spectroscopes for a fun family event. It’s great to share them with those who are interested in learning more about the composition of comets and Sun in their Solar System.

In learning about the spectrum of the Sun and the elements within it, one can use the same type of instrumentation to study any celestial object which gives off light, including comets. Comet ISON is going to be very different from other comets because it has not yet been around the Sun. Since the gasses it carries with it are the same ones it has had since it left the Oort Cloud, we will learn more about the Oort Cloud. It has been several hundred years since a pristine and new comet from that source has grazed the Sun. When the last one passed by, there were no modern instruments with which to study it.

This orbital pass of ISON around the Sun will be different. Astronomers will learn what elements are in this new comet compared to Kuiper comets. I expect they will find a very different composition. I am curious as to the percentages of material within that composition. It will be fun to learn more about the Oort Cloud, for that is something we mainly read about but know little about.

If there is gas in an interior pocket within the hard mass of the comet, when it gets too close to the Sun, that gas can expand to the point that it blows the comet apart. The comet can disintegrate to leave a massive debris field in the orbital field or break into several larger pieces that continue in the orbit. The comet can also travel so close to our star that the sunward side is pulled more by the enormous gravity of the Sun than the far side. This can create an imbalance which can also pull the comet apart. Any comet traveling too close to the Sun can be pulled into the Sun.

Comets have been photographed going toward the Sun on one side and don't reappear on the other side. They must have been pulled into the Sun. Even though the comet may have been pulled into the Sun, the debris field within the orbit remains. If the comet orbit and the Earth orbit happen to meet, debris left from the comet may whiz through our atmosphere as "shooting star" meteors and either burn up or continue on their way. If debris hits Earth, the pieces are designated as meteorites. While they remain in space each is called a meteoroid.

Between 12-15 January 2013 Earth will pass through the debris field of Comet ISON. Will we have a huge meteor shower? No one knows.  It is creating speculation. Some persons have suggested there will be little to see as they expect microscopic material only. I am hoping for a tremendous meteor shower with a phenomenal display of meteors. Although I may have been lax about being outside after midnight to view some meteor showers, the ISON one will be different.  The anticipation will surely build toward January 2014.

Below is the image illustrating the spectrohelioscope invented by the famous astronomer G.A. Hale in 1924. This illustration is courtesy of Wikipedia, the free encyclopedia. 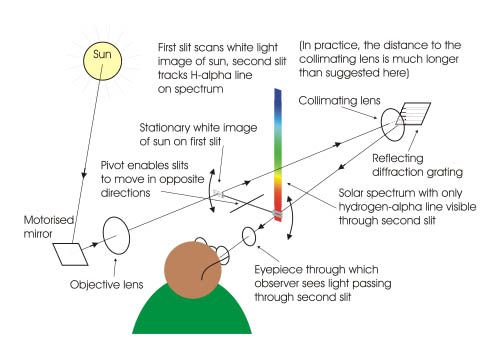