I would like to describe a situation that happened at Fort Hood where U.S. Army dogs are trained. 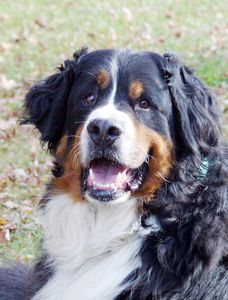 eaching Physical Science at a school in Zanesville, Ohio when a team of dog trainers and two of their German shepherd dogs were brought to the school for an educational assembly.  The trainers discussed how the dogs were trained and treated for working in security and combat situations.  The dogs performed many tasks which amazed the teens in the audience.

It was when the trainers told of a particular day at Fort Hood that I realized the body odor had to be inherited.  What happened took place only once up to that time, but made a big impact on the trainers.  The relating of the situation certainly made a big impact on me and everyone present.  As a science teacher I was trying to analyze all that must have caused the situation to take place.

The trainers said that due the Fort Hood's location, they were often hosting school groups. One of the requirements for the student participants was to place an easily identifiable handkerchief or such small piece of fabric in their pocket at the beginning of the day, the purpose being that it would absorb body odor.

One event was a hosting of grade school students. I believe they were third grade.  After the tour the students were taken to a large field.  No dogs were present.  The students were told to walk anyplace in the field to place their handkerchiefs and then return to stand along a fence line.  They did so with great anticipation of what was to happen.  Two dogs were brought to the field.  The trainers stated that the two dogs would be released.  Upon command, they would move throughout the field to, one at a time, gather the handkerchiefs and return them to the correct owner.  To that date there had never been an error on the part of the dogs.

The children were very excited about the event and extremely pleased that their handkerchiefs were all brought back correctly to the right student, except in the case of identical twins. This had never happened before.  The trainers were surprised and asked the students if they would go through the exercise again. They wanted to see if the dogs truly made a mistake.  Of course the students and teachers agreed to the experiment. The dogs were removed from the area once again and the fabric handkerchiefs placed in new locations on the field.  The children lined up along the fence with great expectations. After all, they were out of school on a beautiful day! They were having fun!

When the dogs were brought out, the trainers gave the command to begin.  One at a time the dogs correctly returned every single handkerchief to the correct child.  The trainers knew something special was happening here for the identical twins were given the correct handkerchiefs.  The trainers asked the children once more if they would give their time to conduct the experiment a third time.  Since there was enough time left for them to do so before they had to return to school, the teachers agreed with the students it would make a fine experiment.  Once again the steps were repeated.  Trainers, children, and teachers waited anxiously to see if the dogs were going to be correct or not in the case of the identical twins.

One suggested answer ... suppose there was a family with a dog ... any dog.  The longer the nose the better the sense of smell.  Dogs are usually protective of family members.  If it is true that body odor is inherited, that would mean that a dog would instantly know if anyone entering the home were related to his family.  The dog could also tell if the humans he lived with were a pack ... a family having similar odors.

If someone came to the door that had no familial smell, the dog would know instantly that person was not part of his pack and his guard may go up.  The dog would have to be told to sit or move away, or shake, or whatever the family has determined is the way the dog is to understand the intruder is welcome.

It would be interesting to hear from families with dogs, especially protective dogs, how their dog reacts to relatives compared to how they react to non-relatives coming to the door.  If what the trainers of Fort Hayes believed to be true, that body odor is inherited, if a person tries to enter the home and is not a relative, he or she would not normally be welcomed by the dog.

Just for fun, I would be interested in knowing of any observations or experiments you make concerning this subject. You may email your results to: irenebaron@irenebaron.com or leave them in the comments section. I hope you look at your family pet in a different manner and realize that they have more observational skills than you previously thought about. I wonder what else they have learned from their sensitive noses?  :-)

The dog pictured above is Skye, my Bernese mountain dog.  Bernese dogs hail from Bern, Switzerland and were bred to pull carts and wagons. That is why they must be trained at an early age to obey simple rules.  If a Bernese is not taught to heel, stop, and other controlling commands, they will pull an adult person easily in any direction.  Many Bernese owners have been caught off guard when the dog they were walking saw something small running and decide to take off after the small critter.  A well trained dog will not.  Bernese are known to be small apartment dogs as they require little exercise.  They also have what is called "dry mouth" in that they never slobber.  When you see a Saint Bernard shake their head and see slobber fly everywhere, you appreciate a Bernese!  They are the same size as the Saint Bernard, but have different coloring and of course, the dry mouth.  They are lovable and adorable. I'm so glad dogs exist!

I understand there are contests to see which Bernese can pull the most weight.  I think that such contests are cruel and inhumane. The reason being that a dog will try to do what his master requires, even if it is bursting his muscles and heart in overexertion. I feel the same way about horses being forced to over exert themselves in weight pulling contests. Tractor or truck pulls are different in that with them, no animal is hurt.