Get out your stereo movie glasses. The NASA Stereo/SECCHI HI-2A camera will begin taking stereo pictures of Comet ISON on 10 October as the comet moves into camera view. On or after that date NASA will begin releasing the stereo images, providing there is no government shut down of NASA missions. I'm going to be checking the SECCHI website image gallery and having fun looking for photographs in the media. The news channels on television should carry the best pictures. Newspapers and magazines will be reproducing them also. I'll try to have some on this website for you in case you miss the event.

One of the current NASA missions is a comprehensive campaign to observe the comet as it passes the Sun. Much planning has taken place to prepare where to aim the SECCHI cameras between 10 October through the beginning of next year. The schedule of planned images is at the bottom of this blog.

There is an interactive Comet ISON applet I recommend which illustrates the positions of Comet ISON, the Sun and planets Mercury, Venus and Earth in orbit. That site is: http://stereo-ssc.nascom.nasa.gov/comet_ison/.  You can slow the action down to analyze the positions of the space object more completely. While you examine the site, please note the position of Earth when it passes through the orbit of ISON in January of 2014.   Every time Earth moves through a comet orbit, we have meteor showers of debris left behind by the various comets. When Earth moves through the debris field left by ISON, as this will be the first time, there is no guarantee of what will happen in our skies.  There have been predictions that the expected meteor showers will have such small particles of dust that we won’t even notice them.  On the other hand, there may be some larger particles.  Perhaps if the comet fractures or disintegrates as it reaches perihelion on 28 November, there may be larger particles which will burn up or pass through our atmosphere to give us memorable views.

There have been past estimates that the daily mass of meteorite dust and debris that rains down onto Earth amounts to about 7-tons per day. Perhaps ISON will contribute more.  Personally, I am an optimist and am hoping for some spectacular views.  Since this is the first time ISON is moving through, no one can accurately predict what will happen. I do know that the anticipation of the resultant meteor shower caused by ISON’s passing is growing.

Russian astronomers Vitali Nevski and Artyom Novichonok used data from the International Scientific Optical Network (ISON) to discover the comet. Since that time there has been much speculation as to whether it will have the gasses blown off it by the Sun’s solar wind or manage to keep them. If the comet keeps the dust and gases, we will benefit by seeing a large comet tail. Originally comet predictors said the site may be 15-times brighter than the full Moon. This is why Comet ISON has been called the “Comet of the Century” and the “Christmas Miracle.” Predictions range from it being a dud to most spectacular comet ever seen in written history. We won’t know until it passes the 28 November point.

NASA has predicted positions of Comet ISON for the SOHO views in addition to the EUVI-B field-of-view in ten-minute intervals between 17:50 UT and 20:00 UT on November 28, 2013. The plots provided in the NASA image are estimates. As more observations are made and more data collected, the information will be updated. 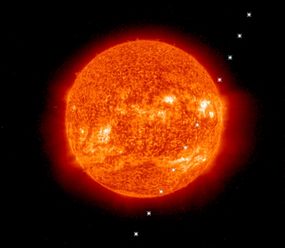 There is a movie that shows the mathematics behind the SECCHI stereo cameras.  It is located at: http://secchi.nrl.navy.mil/STEREOorbit/C2012_S1_ISON.html. When you download the interactive JAVA video, you may have to wait a few moments. It is worth the wait.

SOHO, the Solar and Heliospheric Observatory will also have a view of the comet when it passes in their field of view. It will be in view of the LASCO C2 and C3 coronagraphs between 27-30 November, 2013. The SDO, Solar Dynamics Observatory, may also be able to view the comet.

NASA has made a mission of observing the comet. The NASA observing ISON campaign  can be located at: http://www.isoncampaign.org/.

Below are the planned NASA SECCHI stereo imaging events.