When I lived in Thailand over 4-years, Pattaya Beach was a very quiet place on the Gulf of Siam several hours south of Bangkok. Back then, around 1970, there were no establishments on the beach like there are now. The only organization was the Royal Thai Yacht Club where I crewed on an Enterprise Class sailboat sometimes. There was one little hotel, the Nipa Lodge, that had a swimming pool. We enjoyed that lodge as they had pet gibbons for everyone to interact with on the patio. One gibbon was chained to a tree which kept the mate close by. Both were sweet animals. 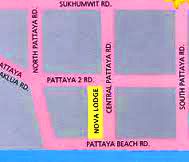 two establishments/restaurants/bars at the southern section of the beach, one of which was for “farangs” or foreigners and the other frequented primarily by locals. There was no discrimination. Anyone could go to either locale. However, one catered to the American contingency by playing music common to the U.S.A. and serving American style food.

There were several young women working at the American Embassy, the United States Overseas Mission, or at my organization, the Advanced Research Projects Agency with whom I became friend 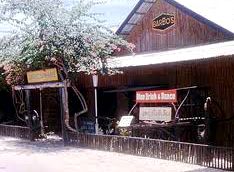 s. When one of them approached me to mention the possibility of getting a ride on the military convenience bus to the beach on a Saturday, I jumped at the chance. If you had a set of orders or a military ID card you were eligible to take advantage of the bus. The number of females who took advantage of the bus hop to the beach numbered from three to seven. The bus was usually empty for the whole trip except for us. The driver said he had to make the trips anyway as there might be military in Pattaya looking for a way back when the bus returned later in the day. I’m aware of the bus making the trip every Saturday and Sunday. It may have made it every day.

We usually stayed overnight in Pattaya to return on the Sunday trip back to Bangkok. The main bus stop in Bangkok was on Sukhumvit Road, near my hotel. The return trip usually had us young ladies and one or two servicemen.

One Saturday the girls decided to stay at the hotel swimming pool to talk with some interesting gentlemen. I took off across the road to the beach. The water was like glass with no waves. There were a perhaps 3-4 small Thai families on the beach, but no one was in the water. As far as I could see, the beach was basically deserted. That was unusual for the beach was normally busy with people of all ages playing in the water.

Having experienced the burning white beach sand, I ran across the beach and dove into the shallow water with a running dive.  Rapidly propelling myself out away from the beach, I began swimming parallel to the beach. The water was warm and still. I never used goggles and was used to closing my eyes when they were in the salty water.  Therefore I didn’t see any fish or marine life. There were no seaweed clumps anywhere to impede my motions, so I did the crawl with a flutter kick for about an hour up and down the beach.  It was wonderful. The sky was deep blue with no clouds. The water was not the pale blue-green like the Bahamas, but a blue that deepened in hue with the depth.

Granted, I was an experienced swimmer and didn’t make much of a splash. However, I did leave a wake behind me. Against the glassy sea, it was noticeable. Being blonde in a country of dark hair, when people saw me, they had a tendency to stare. At times children who had never seen such an apparition as myself were frightened to see pale skin, blue eyes and blonde hair. So, when the people on the beach watched me swim with staring eyes, I paid no attention.

When my energy began to wear down, I went toward the beach where I entered the water. When the water was shallow enough to stand up, I did so. It was then that I noticed the water was filled with Aurelia jellyfish. The heads of each was between 3-4 inches across and the tentacles about 4-5 inches long. They were a clear/whitish color in the water and were EVERYPLACE. Egads, I thought, will they sting me?

At that point in time, I was very frightened. I had to walk through the chest high water to the beach through what must have been thousands of jellyfish. If that mass of jellyfish had been distributed along my swimming route, there must have been millions. About every square foot of water held one or two or more. 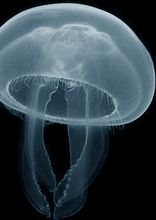 Slowly, so as not to disturb the jellyfish, I managed to get to the beach without getting stung. The few people on the beach looked at me in wonder.  Here I had been swimming in a jellyfish infested water for over an hour and didn’t get one sting.  At the time, I had no idea why. I felt very lucky. Then I knew why no one else had entered the water. They must have thought me an idiot and were staring at me during my swim to see what I would do when I got stung! I was their entertainment for the day.

Guess what?  There was NO wave action. The sea was calm with no wind. It appeared as flat as a swimming pool. There didn’t appear to be a longshore current where I was swimming. There was no way the sperm and eggs could be tossed around to meet.

Then, lo and behold, entering their water was a simple human who was going to create some wave action.  I can just imagine them thinking they would let this human swim around through all their jellyfish sperm and eggs to mix the water. That’s probably what I was -  just a living device to simulate wave action of the water. Yep … by myself, I perpetuated the mingling of the great jellyfish mass to help the process of fertilization and create more jellyfish. Ugh! Can you imagine what the water would have looked like with all those gametes? Yuk! I'm glad I didn't notice the tiny cells.

If the jellyfish had hard bodies, I would have felt them. I didn’t notice them at all until I stood up. Had I worn goggles and seen what I was swimming through, I would have left the water as fast as I entered it. In my ignorance, I helped that multitude of jellyfish. I had never seen jellyfish at that beach before and never suspected their presence. I lived in Thailand over 4-years and had been to that beach often. Had I walked slowly into the water, instead of running with a shallow dive, I would have seen them. So, I had another great experience.

Did they know I was helping them? I think so. If not, I should have gotten stung multiple times.

Why did they not sting me as I swam through them for over an hour? Again, perhaps they knew I was helping them???

Are they that intelligent? Or is it innate instinct to want the water agitated to mix their gametes?  I would like to think they were given the gift to understand what was happening in the absence of wind caused waves. According to the latest theories, every living thing has some form of intelligence. These are a societal creature. Yes, they are intelligent.

I invite your comments. Perhaps you can give me answers.  Have you been swimming with jellyfish?  Send your theory to: irenebaron@irenebaron.com.