COMET ISON APPEARS TO HAVE SURVIVED!

Today, 29 November, NASA released a tri-photo set of images showing ISON rounding the Sun with a nucleus and tail. How exciting is that?  :-)

I have been waiting for this comet since it was first discovered over a year ago and predicted to be magnificent. This is the first comet where I have had the opportunity to photograph it using a good telescope. Much to my regret, trees blocked the November predawn viewings.  I have been looking forward to the December viewings when it would be visible after sunset. I hope comet ISON retains it's nucleus and tail.

When I first heard on Thanksgiving day that the comet may not have survived perihelion around the Sun, I was crushed. Resigned that I may have to settle for anticipating and watching the debris field encounter with Earth in January, I speculated the resulting meteor shower at that time might prove spectacular. Even though some astronomers say the material may be dust sized, I can hope!

Then today, low and behold, in an article written by Karen C. Fox from NASA’s Goddard Space Flight Center in Maryland, on my computer were the NASA images showing the comet after perihelion. This image is courtesy of ESA/NASA/SOHO/GSFC. 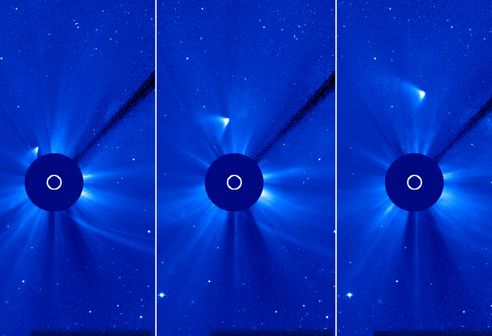 Comet ISON appears to have retained a nucleus with a tail. It looks like two tails, one of gas and one of dust/debris. Since it did survive, I would expect the nucleus to have been constructed of solid rock, not made up of accumulated debris. If the comet had been made of debris and a mishmash of rock particles traveling together, it would most likely not have survived passing the Sun less than a million miles from the surface of the photosphere.

There is an excellent video showing ISON in orbit approaching and exiting the region of the Sun located at: http://www.nasa.gov/content/goddard/comet-ison-may-have-survived/  This video is truly awesome. This outstanding video includes footage from 27 November 3:30 p.m. EST to 29 November, 8:30 a.m. EST. The images were taken by the ESA/NASA/SOHO/Jhelioviewer. What a wonder it is to be living at a time in history where the scientific developments allow us to see something such as a comet grazing the Sun! This is truly the "Information Age."

When the comet appeared to be not visible when it approached the Sun, some scientists thought that perhaps it had disintegrated. It could have perhaps been interference of the solar winds or photosphere which made the viewing difficult. I express my ignorance about that subject.

Comet ISON has definitely been changed by the solar encounter. The good news is that scientists believe the nucleus still exists, albeit changed or smaller. It may therefore not be exactly as it was before the solar encounter, but shows up strongly on the photographs and in the video. Could it be loose debris from the comet? Perhaps. The speculation is that the nucleus is solid.

The materials contained within the comet and surrounding it traveled with the comet from the Oort Cloud. The Oort Cloud is at a distance of over four light years from our Sun. A light year is about seven-trillion miles. The origin of the comet material is therefore about twenty-eight trillion years from us. The materials contained within and around the comet are materials which were present at the beginning of the formation of our solar system. Most comets that orbit the Sun have been around so long that the Sun has pushed their original gases into space. There’s not much left. It is with excitement astronomers and chemists await studies of the elements within the comet field.

ISON, however, hopefully still retains gases and what appears to be most of the nucleus. By studying the light reflected from the comet and the gases, as illuminated by the Sun, astronomers will be able to identify the elements and materials the comet brought with it from it’s place of origin, the Oort Cloud. Therefore, we will learn more about the materials present in the Oort Cloud, home of Comet ISON.

Below is another NASA image showing Comet ISON entering and exiting the region of Sol, the only star of our Solar System, commonly called the Sun. 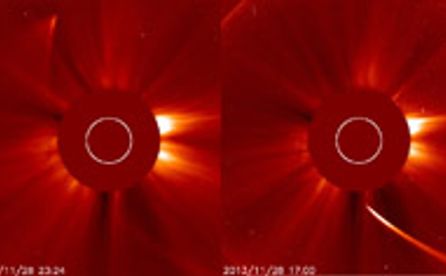 For more information about the comet, check out: