Geographical location made a difference in what percent of my physical science students were genetically color blind. 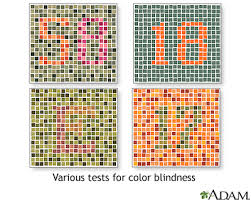 Teaching high school Physical Science encompassed the study of the electromagnetic spectrum which included light. To make the study personal with my students I usually introduced information concerning the human eye. They learned about the parts of the human eye, shape variations, and how various corrective lenses refract light to enable corrected vision. Tucked into the lesson was information concerning color blindness. Colorblindness is not curable and is usually inherited. It is carried on a gene which is recessive in the female but appears dominant in the male. This explains why there are more colorblind or partially colorblind males.

I found that high school students knew very little about colorblindness. Once discussions concerning light frequencies of the electromagnetic spectrum were completed, my students became more familiar with different frequencies of light color and how the light reflected. They were then taught about refraction. The investigations allowed students to experiment refraction with different shapes of glass. With flat 3” X 3” X ¼” glass students experimented with movement of light through the edges of the glass as it entered at different angles. They learned the angle of light entry was very different from the angle of exit. They also studied refraction with concave, double concave, convex, double convex and varying thicknesses of each.

At this point they were ready to study their own eyes and how they perceived light and color. The structure of the eye was discussed and how some features of sight were inherited. These were students who would be driving and needed to understand that their perception of colored light at traffic stops might save them from being involved in an accident. Red and green, the primary colors used in traffic lights in the United States, are also the two colors which pop up most often in color blindness. There are different variations of color blindness, but red color blindness and green are most common.

Local optometrists were very helpful with loaning materials for color blindness tests, similar to those at the upper left from the Department of Health and Human Services (NIM.NIH.gov).

I would run my student through several variations of the tests, including one involving over fifty slides purchased through our science department. Students were always more interested in experiments when it involved their physical self. When giving these tests they were attentive and quiet. It was enjoyable for them to find out if they had normal color perception. They were always told whatever type of color perception they had was normal and found in humans around the globe.  It was usually a shock to them if their color perception did not fit the norm of no color blindness.

In Newark, Ohio I discovered 5-8 students per class of 35+- were colorblind in some way. After the colorblindness tests, students experimented by pointing to different colors in the room and asking the colorblind students what colors they perceived. Excitement, dismay, humor and disbelief were some of the feelings displayed in the classroom. Students who discovered they were colorblind and skeptic as to their condition were invited to see their optometrist if they were concerned. They were taught that colorblindness is a normal human condition not experienced by everyone.

The most unusual class colorblind test result that I had ever experienced involved a young lady who was totally colorblind and never knew it. She was in shock that her test revealed total colorblindness. So were the students in the classroom. Of course she was queried by everyone as to how colors in the room appeared to her. She was asked how her clothing was always perfect with no colors ever clashing. She answered since she was never good at matching her clothing colors as a child, her mother always laid out her clothing for her for each day. When asked how she was able, in art class, to always paint the sky blue and the grass green, she answered that in primary school the teachers would point to the little pans of colors in the small paint tray and tell her, “This one is green for grass, this one blue for sky, this one red for the ball,” and so on. Until that point we never thought about the paint trays always having the same colors in the same order. When the young lady began crying, we stopped being curious.

She missed several days of school. I was told by the school nurse that the girl was in shock. She had viewed the world in white, black and grays. She had always believed she was just like everyone else. She realized she was not and felt inferior and abnormal. To be a female and be totally colorblind was most unusual. She went to her optometrist and had the classroom study results confirmed. When she returned to the classroom, the class was subdued as no one wanted to hurt her feelings or say the wrong thing to her. Consequently, the topic of her being colorblind was never mentioned again in the classroom.

Newark, Ohio was the only city I taught in where a large percentage of students in each class was colorblind. Other locations I would have perhaps one or two students out of all my daily students numbering almost 200. If anyone wants to study or research colorblindness, I would recommend they so do in Newark, Ohio which has a  high rate of colorblindness in the gene pool.

Below are several tests for color blindness. See how you perform on these sight tests. The human eye is capable of seeing over 40,000 colors, tones and hues with more capabilities constantly being discovered.

If your job requires pure color perception, there are corrective options. One website offers corrective filters for colorblind eyes. Read more at: http://www.colormax.org/?gclid=COqS2PSkocgCFUQTHwodrKQNVg

Newark, Ohio is also the location of the most unusual eyes I have ever seen.

Standing at the entrance to the former Lincoln School on East Main Street, an attractive woman about 40-years old and unknown to me said, “You’re staring at me.”

I replied, “I didn't realize that. Sorry.”

I thought about her question and finally answered in a confused tone, “No.”

She said, “It’s my eyes. You’re staring at my eyes.” As I looked more closely she added, “They’re lavender in color and the irises are triangular. Most people realize they’re unusual but can’t figure out why.”

I moved closer to see her eyes as she leaned toward me to facilitate my stare. The woman was right. They were a purple color. Plus, I had never seen triangular irises before. In fact, I didn’t know they existed. I think many people would have thought she was from another planet to be so unusual. The sight was slightly unnerving. As the irises contracted, they stayed in the triangular format. I couldn’t tell if the pupil was triangular or not. I asked, “Does that run in your family?”

She smiled and answered, “No.” I didn’t get her name as I was uncomfortable being around her and left to return to my classroom. I’ve never seen another person with triangular irises again. If you have, I would appreciate knowing about it. I wonder what genetic mutation would have caused such a phenomenon?