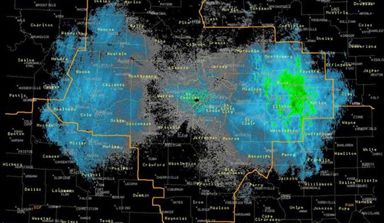 Being a pilot, I always wondered how the FAA determined the Doppler radar difference between weather and migration patterns of flying animals such as butterflies and birds. It is alarming to see Doppler radar images of bird migrations. They cover much of the United States east of the Mississippi River and are so extensive they have caused airplanes to crash. The heights at which aerial migration takes place varies depending upon wind direction and speed, storms and precipitation, adiabatic lapse rate, temperatures at which their wings allow flight, season of the year, etc.

When I lived in the state of Delaware, home of massive bird migrations, I watched aerial migrations of birds in flights stretching out lengthwise almost five-miles. The thickness of such a bird mass was easily one-fourth of a mile. The height at which they flew varied with the time of day. I was on the second floor of a building looking out a window one morning and saw birds at my height and lower flying by. Some of them were within ten-feet of the window. Had I been able to open the window, I could have reached out to touch their wingtips. After ten-minutes of admiring the beautiful spectacle I had to reluctantly leave the view. It was the first time I had been that close to flying birds in such massive numbers. Most of the DE migrations I saw took place during the twilight of sunrise or sunset. The birds were usually flying towards the north or northwest from Wilmington, DE. I only saw them as they were flying north during spring season. They flew further south when retracing their route in the late summer or fall.

I had not thought about butterfly migrations showing up on Doppler radar until this year. Coming across DoppleToggle Full Screen Moder images of butterfly migrations was mesmerizing. The fluttering wings of thousands of butterflies makes the radar image hazy with no clear edge. The edges change continually. Upon investigation, I learned butterfly wings have to be warmed to temperatures in the mid-fifties in order for the insects to fly. The altitude at which they fly is therefore determined by air temperature. They have been known to fly as high as 6,000-feet in altitude. They often fly at night, perhaps to miss the numerous airplanes which fly during the day.

The National Weather Service (NWS) of Reno, Nevada posted on 27 March 2015 the double radar image showing a spring monarch migration. The swarm is wider than it is tall. http://www.irenebaron.com/irene_baron_blog1/monarch_butterfly_migration_on_doppler_radar

Monarch butterflies moving through St. Louis in 2014 were captured 0n Doppler radar and broadcast by Fox 2 News. This distinctive blue and black image is at the left. You can find images at: http://fox2now.com/2014/09/23/radar-picks-up-monarch-butterflies-migrating-through-st-louis/  St. Louis wishes good luck and a safe journey to these amazing little creatures on their long journey!

One of the most beautiful and educational videos about monarchs was created by Google Earth. It is Stories of Biodiversity on the Move: Monarch Butterflies (danaus plexippus).
Considered one of the most epic journeys of the animal kingdom, the monarch migration begins from the geographic location of their winter home in South America, the Monarch Butterfly Biosphere Reserve. Find this beautiful video at: https://www.youtube.com/watch?v=uqDwvuleRYc 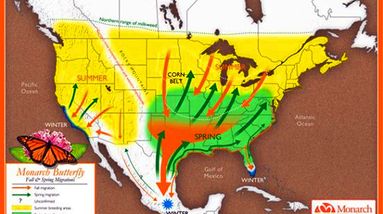 The monarch migration route produced by MonarchWatch.org shows how they move through the United States. When they move into my Ohio backyard, they stay for the summer. There are so many birds I worried the monarchs will be fodder.  Then, I saw a crow in 2014 grab a flying monarch in the center of my yard area while flying east to west. The crow must have been dive bombing for it was extremely swift in flight.
A video showing and explaining the Doppler radar of the monarch  migration can be found at: https://www.youtube.com/watch?v=xNnxdMop3OY