The original KIRKUS reviewer of the book, "Unraveling the Christmas Star Mystery" wrote an incorrect date in their review for the appearance of the Christmas star.

Using the "Common Era" system of naming dates, the reviewer incorrectly stated the appearance of the Christmas star was in 4 B.C.E. which translated into 4 B.C.

The correct year of Christ's birth was 4 A.D. The reviewer made an error of 8-years. This error negated my Christmas star research with incorrect information. The NASA astronomy computer programs placed the Christmas star appearance in the year 4 A.D.

Persons reading the original KIRKUS review would assume the data had been correctly transcribed. Without reading the book, anyone reading the review would repeat the eight-year error in future statements or reports. The KIRKUS organization was contacted about the error which was speedily corrected. Unfortunately, the original incorrect review had already been printed for the public.

The corrected version of the"Unraveling the Christmas Star Mystery" KIRKUS Review is printed at the bottom of this page.

In addition, the reviewer also stated: "... her research unfortunately lacks the imprimatur of a scientific institution..." Upon researching the exact meaning of this statement, I found that in order to receive the "imprimatur of a scientific institution, since this the book is considered a nonfiction religious book, I needed to obtain book approval from religious leaders such as the Catholic Pope or leaders of other religions.

Religious leaders are required to teach and promote only material written in their accepted Bible. The current Bible discusses only one Christmas star. It mentions only the "position marker star" for the new God's birth location. It does not discuss all the other previous celestial happenings which told the ancient astronomers WHO was being born and how important that new God would be. From what is written in Bible history, information concerning how only one lone star gave them information about who was being born was not discussed. Knowledge of such astronomical and astrological information was unknown by Herod and his court. His court of advisors must not have included any astronomers.

To repeat, Herod was told the travelers were following a star to find a King. Evidently Herod or others in his court did not ask the traveling astronomers HOW they knew a King was being born. If they would have asked, Bible and other history books would have included that data.

That is the crux of the problem. I uncovered factual, astronomical data previously unknown concerning the months prior to Christ's birth. The mathematically precise computer data correlated with symbols Biblical passages, historical records, illustrations on ancient monuments, coins and legal seals dating back three-thousand or more years, all of  which gave astronomers information to understand WHO WAS BEING BORN.

Religious leaders want to keep their jobs. They will read "Unraveling the Christmas Star Mystery" and be thrilled with finally knowing the truth. However, because the knowledge has so recently been brought to the public and not yet been duplicated and published by other astronomers, it may not be accepted. It took many years for religious leaders to accept the Big Bang Theory. It may take as many years and as much research for religious leaders to accept all of the spectacular Christmas star events which occurred prior to Christ's birth.

I sincerely believe validation of my research will be accomplished in the future. Just as Edmund Halley's discovery that comets orbit the Sun was not accepted during his lifetime, validation and recognition of Christ's Christmas stars may not occur during my lifetime. Perhaps such validation will occur long after I pass through this world.

In the meantime, those who read my book will discern it is accurate and based on undisputable fact. In the near future I hope to transcribe and publish ALL the data with more references. My original computer printouts from the NASA astronomy computer programs are available. Names of all those programs and all references are in the book, "Unraveling the Christmas Star Mystery." 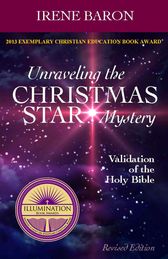 Validation of the Holy Bible

Debut writer and former science teacher Baron tackles the ancient mystery of the Christmas star—the astronomical phenomenon recorded in the Bible as having heralded the birth of Jesus Christ.

Baron used star-chart software from NASA to study the placement of the sun, moon, and planets in the skies over a period of years around the probable birth of Christ. Instead of studying the
placements of these objects in the nighttime sky, as many have traditionally done, she looked instead at the sky at or before dawn. She took this approach because the Bible quotes an angel as saying “this day” a savior is born, as opposed to “this night.” Baron concludes that a series of 10 events in the year 4 B.C.E. would have signaled the coming of a divine king to astronomers of the era. Among these signs would have been an eclipse of Saturn by the sun and two solar eclipses. The final sign would have been Saturn rising while Venus and Mars stayed below the horizon. Therefore, “the final beaconing ‘star’...was actually the planet Saturn.” In addition to this astronomical information and hand-drawn charts to show the placements of these astronomical bodies, Baron also provides a primer on astronomy itself, a synopsis of celestial symbolism for various peoples of the era, and a discussion concerning the possible identity of the wise men, or Magi, who came in search of the Christ child. Baron’s work is lucid and provides excellent food for thought. She is to be especially commended for thinking outside the box on what is a long-standing point of argument among experts on astronomy, astrology, and biblical history. What Baron lacks is the professional credibility to drive her conclusions from the realm of lay theory to that of scientific theory. Her research unfortunately lacks the imprimatur of a scientific institution, which leaves the reader susceptible to doubt.Intriguing study of the “Christmas star” but in need of further scientific backing.