Will there be a megathrust earthquake from the Juan de Fuca microplates? 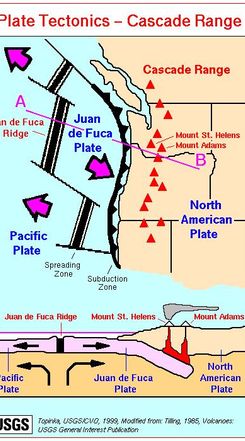 In the past month there have been alarming articles circulated in social media predicting a major Juan de Fuca Ridge caused earthquake along a 500+ mile section of North American continental plate. According to the articles, the Juan de Fuca microplates are creating a large earthquake threat to southern British Columbia and the Pacific Northwest region of the United States.

This microplate system, located between 40 degrees– 52 degrees North  latitude along the western coast of North America, is part of the famous “Ring of Fire” surrounding the Pacific Ocean. The ring of fire earthquakes and volcanoes has been created by subduction zones around the Pacific Ocean where the ocean floor is being thrust under continents due to movement of the crust.    The USGS diagram titled "Active Volcanoes, Plate Tectonics, and the Ring of Fire" illustrates plate edges where spreading has and is taking place.  Notice the black lines in the image where splitting of the Earths’ crust is taking place from spreading centers.

Notice what is happening at California, Oregon and Washington. The spreading center has already moved under the continent. As the continent moves to the west there will be more activity to the crust above. By seeing the location of that spreading site, observers can more readily understand why the western edge of the United States may move toward the Pacific Ocean faster than the rest of the continent.

This unstable Juan de Fuca plate is active with motion similar to the continental plate which caused the deadly 2004 Indonesian  earthquake and tsunami.

Earthquake seismologist for the Geological Survey of Canada, Alison Bird, reports a discovery at the office in Victoria which impacts the answer to when it will occur.

She reported seismologists noticed an unusual pattern on seismograms along the Juan de Fuca plate.

In an interview she stated, "Every 14 months or so there's a sudden reversal of movement [of Vancouver island] for a couple of weeks.It's buckling in that one direction but suddenly it settles a little bit ... it could be a last straw scenario, [where] just that little bit of extra stress that's going to cause that rupture to trigger ... the megathrust earthquake."  She reports, “Where the Juan de Fuca plate is subducting beneath the North American plate, and where those plates are touching, it's locked." She produced two images of earthquake records about Vancouver Island. She stated that about every 14-months there is a swarm of earthquakes as slow slippage takes place. That slow slippage has stopped and stress is building up. This is why she predicts a major earthquake to take place along the Juan de Fuca site. This is why Canadian media is reporting predictions of a major quake and considering it a high hazard zone. There has been little notice of such earthquake threats in media within the United States.
Read more at: http://www.cbc.ca/news/canada/british-columbia/earthquakes-bc-slow-slip-1.3794192

As ocean floor of the Juan de Fuca complex moves under the USA and down, its mass will become hot. Some of it will melt. Due to its temperature, the melted mass will be less dense and rise through the Earth to form volcanoes or lava flows. Ever since Mt. St. 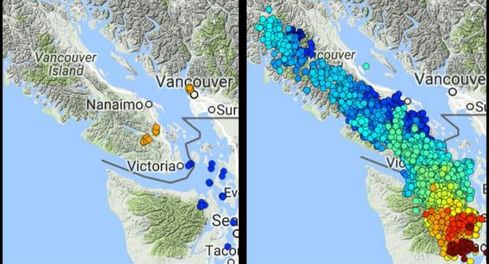 Helens erupted in the early 1980’s, volcanoes in the Cascade range have been rumbling with small tremors. Those tremors may increase with the continental collisions associated with the Juan de Fuca subduction zone. Consequently, more volcanoes in the Cascade range may erupt. The most dangerous volcano on our western coast is currently Mt. Rainier. The feldspar mineral in the lava rock making up that volcano cone has weathered and left only a skeleton of support. One major earthquake and Rainier will most likely collapse.

I don’t want to be an alarmist, but if there is a Juan de Fuca megathrust earthquake and you live near the Pacific Ocean, you’ll have perhaps 20-minutes before the first major tsunami hits the coast. Be prepared to move to high ground immediately. Evidence shows past tsunami waves/surges from a Juan de Fuca megathrust quake have been over 6-meters high with resulting water pressure destroying most everything in the path.

As a pilot, I was taught to continually search the ground for a place to land in case the engine cuts out. If you’re with a pilot in a private aircraft, you’ll see them continually searching the sky to avoid other airplanes and searching the ground for landing sites. Pilots must think ahead and be prepared for such emergencies. Just as Midwesterners prepare for tornadoes, persons living near the Pacific coastline need to also be prepared for emergencies and be aware of their surroundings. An earthquake emergency kit should be put together for themselves and/or their family. Learn about earthquake kits at:
http://www.cbc.ca/news/canada/british-columbia/top-10-essentials-for-your-earthquake-kit-1.2746322

An animation, prepared by Kenji Satake of the 1700 tsunami is located here:
Tsunami Originating From Cascadia Region
The file is 6.8 MB in size and will load slowly using dial-up connections

Why the risk of the 'Big One' in B.C. is heightened every 14 months
http://www.cbc.ca/news/canada/british-columbia/earthquakes-bc-slow-slip-1.3794192