The mural of the Holy family is finished and hanging in front of the sanctuary at Coburn UM Church in Zanesville, Ohio. Tours can be arranged by calling the church  740-454-0186. 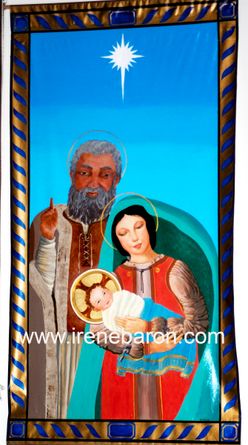 on, drawing and painting of the mural took many hours and days during 2017. Many sketches were made and discarded. The final one was enlarged to fit the 12"-square grids on the canvas. The grid was placed with lightly applied, graphite lines over the canvas. The grid lines were erased prior to any paint application.

Drawings were made using graphite pencils on translucent architect paper. Large figures required taping sheets of paper together. When all the sketches were completed, I taped them onto one wall, ceiling to floor, to see what needed to be addressed.

Again, there were changes made. When I was satisfied with the initial drawings, the papers were placed on the canvas to see how they looked. Once more, the figures were moved to create a more pleasing composition. When I was satisfied, each figure was lightly transferred to the canvas using carbon paper. When all figures were in place, a light coat of clear glaze was put over the lines to ensure they did not smear or disappear as the painting progressed.

The acrylic paints were mixed on Styrofoam plates or, with a larger paint amount, in Styrofoam bowls. I began saving used plates to see how many I used. The completed stack was about 4-feet high! I didn't use them to refer to paint colors as I saved all the paint matches in the book completed for that purpose.

Having researched how the old masters achieved long-lasting colors, to emulate their methods, I used 15-20 coats of tinted, clear glaze over colors I wanted to stand out. Those included anything associated with Mary and the Christ Child. I painted them in vibrant colors.

Joseph was provided for Mary solely as support and protection. During her decade of living in the Jerusalem temple, she made a holy vow to never sleep with a man. Therefore, I painted Joseph in natural colors which faded into the background. He is prominent in the painting, but not like the other two. There are only three figures in the painting.

The Star of Bethlehem, now identified as the planet Saturn (Baron. Irene. Christmas Star Events. Unraveling the Christmas Star Mystery. 2013. p.83), was created with the vertical and horizontal points longer to remind observers of the crucifixion cross. It is the brightest object in the picture. The Christ Child is the second brightest object. He was designed to be in Mary's arms and directly under the star. His swaddling clothes are second in brilliance to the star. There is a light outer layer to his halo which is the third brightest object in the mural.

To document all my thoughts about how the design should be created to match the stories in religious documents and the Bible, a large notebook was created. It contains copies or original drawings, paint samples, names of paint colors used for each application on the mural, etc. The creation of the notebook was accomplished primarily at home except for the paint swatches which were applied during painting at the church.

November and December 2017 often found me in my workroom at church 4-6 hours per day, even on weekends. The painting took place in a small, upper classroom. The canvas was spread out over 4-large white tables with the 11' X 6' canvas overlapping the edges of the tables. The room was so small, I had only 10" to squeeze between wall and tables to move from one side of the canvas to the other.

Accolades for the canvas have not ended since it was hung. Because of the glowing colors, persons seeing it for the first time are often open-mouthed. They are also surprised at the mural size. To compare how large it is, I included 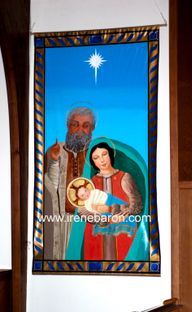 Members of one tour group from Mt. Vernon, Ohio took multiple pictures. Persons guiding them through the church stated they remained in front of the mural for an extensive time admiring it and asking questions. They wanted to know all about the artist, where it was made, when it was made, and all the details. They said they had never seen such a beautiful church mural. When I was told about that tour group, the person relaying the information was pleased to relay the details. It was fun for me to hear them. The creation from concept to completion took over a year and hundreds of hours.

The drawing part to create original art was the most difficult. The painting, although it took time, was easier as the concept and colors had already been chosen. It's nice to know there is no painting like it anywhere.  The insurance value of the original design, materials and time spent would put the replacement value between $10,000-$17,000. The church paid for the canvas and some of the paint. I used my own paint, glazes, brushes, papers, etc.

It has so many coats of glaze medium to make the refraction and depth of the art intense, it cannot be rolled or moved. The pastor was not aware of that restriction and the mural was placed in a special room where it hung from a high attachment. The taking it down and putting it back in storage has damaged some of the paint. It shows cracks and stress damage, even though it is not very old. I hope in the future the mural stays in one place. Without it hanging up, the sanctuary looks barren. The painting, the colors of which I matched to the stained glass windows, brings the sanctuary to life.

I hope you enjoy the mural.
PLEASE SHARE with the Facebook link on this page.
As artist, I would appreciate your comments.

A recently completed mural now hangs in the Coburn UM Church sanctuary in Zanesville, OH. Artist Irene Baron, using acrylic paint over canvas to create the 11’ high by 6’ wide picture, stated that concept to completion took a year. When asked how glowing colors were achieved, she replied, “By painting like the masters with many coats of tinted, clear glazes.” Baron said,  “Since new religious murals are rare in the United States, it has been greatly appreciated by the congregation and out of town visitors who take many photographs.” The mural will be on display indefinitely at the church. Tours can be arranged by contacting the church at 740-454-0186. More can be learned at URL: www.irenebaron.com.