What happens when individuals in another country want to secretly contact the President of the United States?

Such international intrigue happened to me in Southeast Asia in 1969. It was a secret affair which remained so until I was ensconced safely back in the United States.

As a resident of Bangkok, Thailand, I worked for Battelle Memorial Institute and was assigned to the Office of the Secretary of Defense, Advanced Research Projects Agency, Research & Development Center, Supreme Command Headquarters, Bangkok with orders from the United States military. My assignment was classified as Top Secret. That meant I could tell no one, from family to senators, what I was doing in that country.

In 1969, concerned citizens secretly in Bangkok from Myanmar wanted to know if the United States would recognize them as the new government representatives of Burma if they had a successful coup and overthrew the current Myanmar government.

They didn’t want to go through the American Embassy in Bangkok, Thailand. They said they had been informed there was a “spook” at the embassy, meaning a double agent. There was someone working on both sides of the fence between Cambodia and the United States. 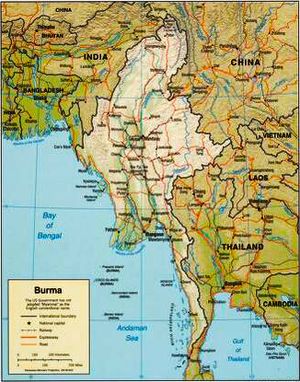 My husband was contacted by Mr. Jim Beck, an in-country representative for General Motors.  Mr. Beck, now deceased, worked with many different Thai nationals and had various contacts throughout Bangkok.

Jim, who had been the best man at our Bangkok wedding, asked my husband and I to meet with some Burmese people trying to arrange a coup in Burma. They reported that everything was in place for them to take over the country. They just needed to ask the President of the United States a very important question. The answer to that question would determine their coup success.

The president of Burma at that time was an extreme isolationist and created much hardship on the part of the general population. The individuals seeking a meeting with my husband were trying to commercially open the country for internal businesses to grow and prosper in the international market, in addition to other concerns. They were also troubled with the welfare of the populous.

The meeting was arranged. Jim, my husband, myself and the Burmese contacts attended the meeting. It took place in an isolated area of a very dark night club which had been prepared for us. No one sat near us. An arc of empty tables and chairs kept us apart from other patrons.

We had to ensure we were not followed and that no one knew what we were about. The whole affair was dangerously secret. We were asked to not discuss this information with anyone.

The night clubs of Bangkok were very different from those in the United States. At that time there are no lights inside the average Thai night clubs except for where there may be an entertainment area. There was no bar you could walk up to get drinks. You had only waiters.  The man who escorted you to your seats used a dim flashlight aimed at the floor to find a small and narrow path between the 12-inch diameter cocktail tables. Four or more small chairs surrounded each table. There were no exit signs.

If you could have seen everyone, you would have counted over 200 persons sitting at tables close to one another. A stateside fire marshal would have been apoplectic.

If any emergency took place, like a fire, no one would have known where to go to escape. That’s why in such places when a fire occurs, hundreds of people die. I went to one night club and found it so worrisome, I never went to another until this secret meeting. I’m a little claustrophobic.

The night club of the secret Burmese meeting was much more elegant than the run of the mill night clubs. It had comfortable chairs and lighting adequate enough to walk without a waiter lighting your way. It was more like a restaurant than a night club.  Aisles were wide. I didn’t know if they were normally wide, or arranged so for this secret event. You could see persons at other tables. No one talked, they whispered. The rest of the room was so quiet, I thought the other guests might have been "planted" by the owner who was sympathetic to the Burmese gentlemen. He may have been Burmese himself.

The nightclub owner and his associates risked their lives to contact us. They gave us every consideration. They had arranged our table and comfortable chairs so they were further away from everyone else to give us privacy. During our presence there, the owner acted very nervous and kept looking around as though expecting the police at any moment.

Jim, my husband, and I were seated awaiting the Burmese countrymen. When they arrived, Jim and my husband went with all but one of the men into a separate and private room prepared for them to talk quietly. One man remained in the main salon area and sat at the table with me as a guard to the doorway.

The private meeting took less than 30-minutes.  My husband reported later that as soon as the men greeted one another in the private room, a discussion took place with reassurances given. During the meeting, my husband was given a written message to secretly pass to the President of the United States. When the Burmese men left, they left through a back door. Jim departed through a side door in a different direction. My husband and I left through the main entrance walking casually as though we were normal guests.

The next day, my husband learned the location and address of the Air Force officer he wanted to use to pass the message to the White House.  He called the USAF officer and discussed only that he had a private message for the President and asked if he would personally carry it to the President. The officer agreed to do so. The next day the message was sealed and sent on its way.

About ten days later, a reply from the President was received by my husband. He gave it to Jim. The message was secretly passed from person to person until it was in the hands of the individuals planning the coup. The answer given by our President was “NO.” The United States would not recognize those persons preparing for a coup within the country of Burma. The men had to stand down in their attempt. The coup, therefore, never took place.

I thought that was the end of the affair. At least I thought so until I returned to the United States years later after a stint in Germany. Friends, family and acquaintances I knew from different states inquired to find out what I was doing overseas. They knew I had traveled a lot and that I even had extensions in one passport as there were not enough pages for all the stamps required at that time.

I assumed they were asking about my job. I couldn’t tell them as I signed paperwork stating that I would not discuss what I did with anyone until the information was declassified.

Our ARPA staff had been instructed to not discuss our mission with family members, friends or acquaintances. When Congressmen or Senators arrived during fact-finding missions,  we were not to tell them what we were doing. We were to be polite and vague if asked direct questions.

Evidently, when the President of the United States received the message my husband forwarded from the Burmese citizens, he and the U.S. Department of  State wanted to know who my husband and I were and how we came to be involved with people from Burma. Previous to this Burmese intrigue, we had been off the political grid. The Ambassador and his wife knew me.  At different parties and events they hosted, we would have polite discussions. The protocol in embassy circles had a high standard. All embassy events were delightful to attend.

Since Jim Beck was not part of the actual message pass and since he was not mentioned in the dispatch, his participation had been ignored by the US government. They didn’t know about his involvement.

The President wanted to know how deeply involved my husband and I were with these Burmese nationals and their coup. He wanted to know how and why we were contacted and all the details. But, NO ONE EVER ASKED US.  Instead, they asked everyone else and told them not to discuss the conversations.

One businessman in my Midwest home town of  Zanesville, Ohio stated he was drilled for almost three hours by two men from the FBI. The FBI wanted to know everything about me, who my friends were, where I worked, and every fact that could be recalled. They then went on to interrogate every person whose name was brought up in that and any future discussions. The interrogation web enlarged.

Friends in Nebraska were contacted. They said they were surprised they were interrogated about me. It was in their Bangkok home that my husband and I had been married.

Stateside friends and acquaintances didn’t know what to think about the whole incident. They were frightened about the intensive grilling they received from men in black suits. They were worried I was doing something illegal and didn’t want to get involved. I never knew any of these interrogations  took place until I returned to the states and was asked by many, “What in the hell were you doing over there?”

The only time I was personally questioned by the FBI was earlier in my career. I had studied French at the Sorbonne in Paris where I lived as a student in the American student dormitory. The dorm evidently kept no record of my habitation.

The FBI agents investigating to check out my background for my Top Secret security clearance needed proof /more information for every moment of my life. They came to visit me in my Bangkok office at the ARPA building (now DARPA). The two black-suited gentlemen were polite and considerate. I gave them all the information I could at the time. My Top Secret clearance came in soon after, so I assumed they were successful in that info quest.

I figured with all those people being interviewed about me, there should be some files someplace with my name on them. When the public was finally allowed to access documents within the government, I sent a written request to see if there were any papers in the CIA or FBI with my name on them. The answer was negative.

After all that?  Really?