When I saw a video about angry seas, I thought back to an adventure I experienced in 1961 during an Atlantic crossing on the Holland American Lines ship, the Grotte Beer out of Rotterdam. This was a 600+ passenger ship which took me on a round trip journey between New York City and Rotterdam, the Netherlands.

This ship, pictured to the left, was one of three Victory Class ships built for the United War Shipping Administration to ferry troops across the Atlantic during World War II.  The Grotte Beer was sold to the Dutch Government.

The ships had stronger hulls for troop transport use during the war but were not finished at the ship yards until near the end of the war. Originally built as troop transports, they were later converted for public transportation. They were temperature controlled heat-wise, had a medical center, central washrooms/restrooms, sinks in cabins, library, lounges, dining rooms, bars, etc, like any cruise ship. Like all Holland American line ships, the crew and service personnel were extremely polite, kind, helpful and often illustrated their sense of humor.

Between the going and coming, I studied French at the Sorbonne University in Paris and toured the Continent using a Europass. Sleeping nights on the trains to save $$$, I would arrive in cities in the morning to tour during the day. Luggage was placed in train station lockers. That was my first trip to Europe, but not my last. When I finally lived in Germany for several years, I was able to visit many more places.

The Grotte Beer, on The Netherlands bound leg of my journey, had to plow through a tropical storm with sea waves towering way over 30-feet. Fortunately, I did not get seasick like the majority of passengers. There were so many seasick cabin-bound passengers, during the storm it was almost like traveling on my own private ship.

During the storm, the most dangerous time was using the stairwells. Depending upon the position of the stairs, amidships or bow or stern, as you stepped down, the ship could drop many feet, letting you freefall toward the next step. When your foot hit the step, your whole leg was assaulted (with knees especially attacked) by the brunt impact force.

Ascending the steps, you had to be careful that your knee did not hit your chin as the ship suddenly rose. If you did not hold on to the railings, you would have flown through the stairwell and could have been seriously hurt. The stairs had to be navigated to get to the dining room. 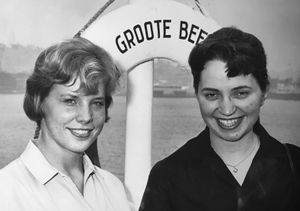 Passengers were assigned one of three meal times. Normally several hundred persons would be having their meals when I was. During the storm, there were 2-3 persons eating. The tables, already anchored to the floor, had edges to stop plates from flying off. What was available to eat was limited due to the precariousness of the moving dishes.

The picture shows me and a young lady who was also going to Paris to study at the Sorbonne in Paris.

I always ordered milk as my beverage. As it was very limited, the milk was served in a ceramic glass so no one else could see it. They served it to me on the condition I didn’t tell anyone else I had access to milk.

The storm appeared to be strongest in the evening. About eleven o’clock in the evening I ventured out of the cabin to see what I could see. I headed to a lower deck and moved to the stern, staying close to the safe area of the wall. There was about 15-feet between me and the side edge of the ship. The distance between me and the tip of the stern was closer to 25-30 feet. There was a roof above me, the base of the deck above me. There were no ropes or safety lines installed at that time.

I was fascinated to feel and see the ship move up and down and could have stayed there all night just watching the movement of the water and experiencing the shuddering ship motions. There was about a 40 degree pitch of the stern up and down and a sideways roll of about 30 degrees. If you moved your hand with such a pitch and roll, you would find it moving in a crazy circle that would get you dizzy.

What was fascinating was when the ship crashed downward. When that happened, water would cascade up into the air at least 50-feet and was pushed away from the ship due to the concave shape of the hull at the stern. I stood there about 20-minutes mesmerized by the sight of walls of water rising way above the ship and away from me. The sheer power illustrated by the water was enormous.

In my ignorance, I felt no danger of the ship falling apart as it was a large ship.

Finally, one of the handsome, middle-aged, white-suited officers walked by and saw me standing there. He did a double-take, his face registering first shock and then anger. Remember, this was near midnight in the middle of a tropical storm. The wind was screaming. The waves were crashing. Water was flying everywhere, but primarily away from the ship due to the shape of the outer hull. I was getting some spray and was wet. The floor was wet, but I was against the wall away from the stern away and boat edge.

The conversation which had to be screamed over the crashing noise of the ocean went like this.

Officer: “What are you doing here?”
I replied, “Watching the waves.”
“You’re not supposed to be here!” His arms and hands were flailing about.
Staying close to the wall, I said, “I didn’t see any signs forbidding it.”
Becoming more angry, he screamed and demanded, “Get inside, NOW!”

Pointing to a door, I dejectedly went inside. Looking back I saw his angry face. He was only angry because my life could have been in danger. The spectacle of the angry sea was so fantastic, I knew I'd never see such a site again. I etched it into my memory.

I went to my crowded cabin several decks down which was shared with seven other young women. They were all asleep in their separate bunk beds.

The next day when the storm had abated somewhat. I went back to the site where I had stood the night before and saw there were now thick ropes attached to walls and support poles which limited how far one could move onto that deck. It was only then I realized how much danger I must have been in. Since it was the stern, I had been protected by waves washing toward me as they would at the bow of the ship. The ones crashing away from the ship’s stern hit the water after being lifted up in the over 30degree pitch could have caught me up had I been too close to the edge of the ship. Had the ship turned and the wave action changed, I could have been washed overboard. I never thought about that at the time. I had just been enjoying the moment.

I don’t regret experiencing that storm one late night on the stern. I don’t even have to close my eyes to visualize the wild and loud scene of crashing walls of water. What a vibrant and exciting experience that was!

Videos showing angry seas of other ships include: