Have you wondered what bulletproof suits look like or where to buy one? 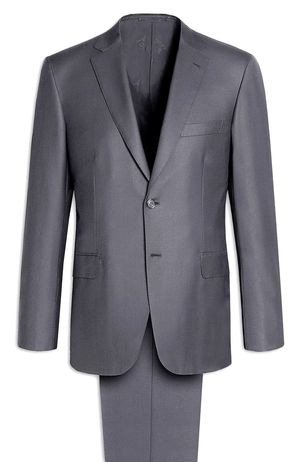 I began researching bulletproof clothing over 10 years ago for the "Mindreacher" psychological and geopolitical thriller novels. At that time you could buy a bulletproof suit in Colombia for about $20,000. Now, you can purchase one stateside for under $3,000.00 such as the “essential” Brioni Roma suit pictured to the left and sold by Neiman Marcus. It’s “essential” as it provides protection while remaining incredibly lightweight. As you can see, it looks like a high-quality suit.

A gentleman with a concealed carry permit would appreciate his weapon not being detectable. This discreet jacket, also used by the Israeli Security Forces, would hide a concealed carry weapon. The next time you see a famous figure who has guards surrounding them, look more closely at their clothing. Bulletproof clothing comes in any style. The outer texture can be changed to the buyer's specifications.

I recommend such clothing for all high ranking politicians, business leaders, and those in the public eye, especially Presidents and Vice Presidents. Whenever I see people important to the security of our country, I always hope they have protected themselves with bulletproof clothing.

I wonder ... if this is such a great bulletproof material, how do you sew it? Do machine needles go through it? Or it is glued together? The first glued clothing I saw was a GoreTex jacket belonging to my daughter.  I expect more profound and secure glues could be used for any clothing.

As mentioned, I required information about bulletproof materials for the hero and heroine of the Mindreacher thriller series. This type of thriller writing is called “factional” as readers enjoy trying to determine what is fact and what is fiction. "Mindreacher" keeps the reader either guessing or being amazed.

As of last year, bulletproof clothing as that mentioned in the novel is not yet on the market but will be eventually. The book’s hero and heroine wear bulletproof clothing when on assignment. The heroine has the ability to identify nearby terrorists by reading their minds.  Since terrorists don’t want to be identified, she and her USMC bodyguard are on every worldwide terrorist kill list. Their lives quickly disintegrate into deadly terrorist encounters as they search the globe for superior telepaths, or mindreachers,  rumored to have been born in South Africa decades earlier.

What makes their life easier is their first and favorite sets of spidersilk based, carbon nanotube bulletproof clothing. They each have a set consisting of a multi-pocket safari-style shirt and long cargo style pants. The spider silk with which they are made is manufactured with graphene nanotubes and other molecules. Spidersilk can be compared to a biosteel. The spider gene, specific to milk-producing animals, has been placed in goats. The milk produced will allow the production of silk. Fibers made from the spinning of goat milk create a biosteel with three and one-half times the strength of aramid fibers currently used in bulletproof armor. Combined with carbon nanotubes will make it formidable.

Molecules of carbon nanotubes were first discovered in 1991 by Sumio Iijima, Senior Research Fellow at NEC in Japan. He is pictured to the left. He applied tape, like scotch tape, to a piece of graphite and came away with a one molecule thick layer of graphite. That was the beginning of Graphene which you will be hearing more about in the future. It seems like every week something new is created or discovered about Graphene and carbon nanotubes. 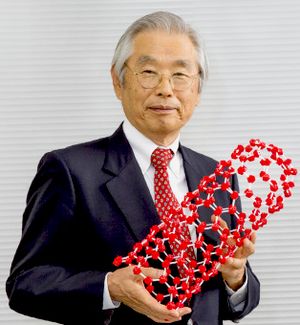 Graphene is used in bulletproof clothing. New uses for the material are being invented continually.  Andrew Grant wrote, "It's strong yet flexible, it's an impenetrable wall for molecules trying to pass through, and it's a fantastic conductor.  By adding calcium it can move current resistance free.
Grant. Andrew. "Graphene turned into superconductor." Science News. 3 October 2015.

A nanotube is defined in the Encarta Dictionary as, “an extremely thin metallic or semiconducting cylinder, capped at one end, consisting of a rolled-up layer of fullerene-structured carbon atoms. The NASA image to the left is a representation of the arrangement of atoms for the creation of the graphene nanotube.

Fullerenes are a form of about 500 carbon atoms arranged in a sphere or rolled up into a tube.  A carbon nanotube has a measured strength of 50 times that of carbon steel.

Scientists speculate they will create applications to make a diverse range of materials stronger, from fabrics to steels.

Techniques have been developed to extract CNT fiber from a soup of carbon nanotubes. Since they conduct and hold electrical charges, electrical devices could easily be incorporated into CNT fabrics.They also conduct heat. Science Daily of 29 July 2016 reported one end of the nanotube is often capped with a hemisphere of a buckyball structure. To date, a flexible sheet of correctly aligned CNTs will support 50,000 times its own eight. It has a hardness 10X that of a diamond. The carbon nanotubes are often arranged in a flat pattern like that of chicken wire.

Jeffrey Winters, the Associate Editor of Mechanical Engineering, reported that Ray H. Baughman, of the University of Texas, spun CNTs with polyvinyl alcohol.  The human hair size threads were 17 times stronger than Kevlar and 4 times stronger than spider silk. That might make the best bulletproof suit yet. Winters also reported Baughman stated, "You could cover an acre with a sheet that weighs only four ounces." It is anticipated that CNT spinoffs will be used in artificial body parts, vehicles, heating elements, batteries, etc. 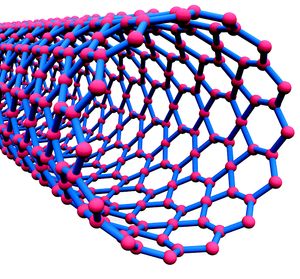 Think how that would affect the construction of airplanes, cars, space vehicles, space elevators and Superman’s cape!

It’s hard to realize the opening at the end of a nanotube can be as small as one nanometer.  It takes about 100,000 nanotubes to equal the width of one human hair. The nanotubes are so small that when water is passed through them,  molecules such as salt (sodium chloride or NaCl) are too large to get through. Saltwater is immediately filtered to pure water by running it through these tubes.

In this manner, our MINDREACHER hero and heroine purify water during isolation in the Laotian mountains as they try to hide from satellites for a few days. I obtained permission from CSIRO to use their water filtration product in "Mindreacher." The water filters used in the book are thin sheets 2  square inches in size. They are standard operating procedures in the novel.

NOTE: The nonprofit Commonwealth Scientific and Industrial Research Organization (CSIRO) in Australia, whose scientists invented the  Graphair water filter, is currently searching for a manufacturer. https://www.csiro.au/en/News/News-releases/2018/Tiny-membrane-makes-Sydney-Harbour-drinkable

The nanotube bulletproof material used in "Mindreacher" is still in the research stages where it is being developed. I also received permission to use the research information in my first MINDREACHER book and other books of the series.

The glossary at the back of the first MINDREACHER book includes carbon nanotube super-fabric as follows:

“CARBON NANOTUBE SUPER-FABRIC:  Due to their tubular structure, carbon nanotube fabrics (CNTs) are 50-times stronger than carbon steel. Scientists speculate they will create applications to make a diverse range of materials stronger, from fabrics to steels. Techniques have been developed to extract CNT fiber from a soup of carbon nanotubes.  Since they conduct and hold electrical charges, electrical devices could be incorporated into CNT fabrics. To date, a flexible sheet of correctly aligned CNTs will support 50,000-times its own weight. Ray H. Baughman of the University of Texas spun CNTs with polyvinyl alcohol. The human-hair- size-threads were 17-times stronger than Kevlar and 4-times stronger than spider silk. Baughman stated, “You could cover an acre with a sheet that weighs only four ounces.”  It is anticipated CNT *spinoffs will be used in artificial body parts, vehicles, heating elements, batteries, etc.
Winters, Jeffrey. "Wonder cloth: a film made from carbon nanotubes may finally live up to the nanotech hype. But first, it has to get out of the lab." Mechanical Engineering-CIME, vol. 128, no. 4, Apr. 2006, p. 34+. Gale Academic OneFile, Accessed 6 May 2020.

The strength of Graphene explained: https://www.youtube.com/watch?v=hvonBXvhCc4