Meteorite and asteroid impact crater sites exist all over Earth. Some may not have been discovered. Others previously not recognized as impact sites were revealed by astronauts in space.

The Earth receives about 60-tons of new meteorite debris from space every day which increases the planet’s mass. Most of that material is microscopic in size.

Meteorites can move toward Earth from any direction. To understand the various speeds with which they may travel, please note that Earth is moving in orbit around the Sun at a speed of approximately 70,000-miles per hour. The Sun is moving around the Milky Way Galaxy at an approximate speed of 450,000-miles per hour pulling all the objects within its gravitational field. Our galaxy is moving through the universe at over 400-miles per second. It is currently believed most of the objects classed as meteorites within our Solar System begin to fall toward the Sun from the Kuiper Belt. (http://space-facts.com/kuiper-belt/) They may begin on their own or as part of a comet and have been contained within the comet’s tail. Whenever the Earth moves through the orbit of a comet meteor showers are witnessed.

If these objects begin motion from a zero velocity, by the time they impact Earth their speed should be at least 25,000-miles per hour. This speed is the terminal velocity caused by the Earth’s gravity. Meteorites have different names dependent upon their location. When in space they are called meteoroids. If they move through our atmosphere, they are called meteors. Upon striking Earth each is given the name meteorite.

The speed at which a meteorite hits Earth varies. If there is a head on impact, due to the momentum of the Earth and meteorite, the explosion with high temperatures and resulting crater will be greater than that caused by a meteorite of the same size impacting Earth from behind. The size of a side glancing impact will vary with the speed of the objects. In history, stories have been told of persons who have seen a meteorite hit Earth and picked it up to find it cold and/or frosty to the touch. Others have seem them appear red- or white-hot. 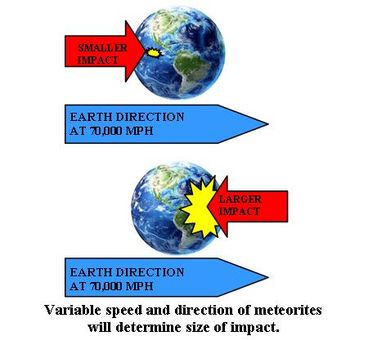 Currently the American Meteor Society writes that the ablation process removes heat.  Ablation refers to the removal of snow or ice by melting or evaporation. The AMS states, “During the final free-fall portion of their flight, meteorites undergo very little frictional heating, and probably reach the ground at only slightly above ambient temperature.” Ambient temperature refers to the temperature of the air surrounding the meteorite. (http://www.amsmeteors.org/fireballs/faqf/#9 )

In the Yucatan peninsula of Mexico, settlers built on the land above what is now known as the center of Chicxulub Crater to create the town of Chicxulub. This crater is one of the largest impact craters known on earth. Most impact craters on Earth have, over the eons, been filled in with sediment. The Chicxulub Crater, being primarily underwater, has not experienced the weathering and erosion of the crater. The position has allowed it to exist for the past 65-million years. A Discovery Channel 5-minute video simulation of the event, preceded by an advertisement, can be seen at: https://www.youtube.com/watch?v=bU1QPtOZQZU.

It is estimated that the Chicxulub object, either ameteorite or asteroid, was about six-miles in diameter. When it hit Earth the impact would have moved ocean water into one of the largest tsunamis to have ever existed. Astronomers and geologists believe the impact took place over 65-million years ago during the late Cretaceous period.  Information about the Cretaceous period may be found at: http://www.ucmp.berkeley.edu/mesozoic/cretaceous/cretaceous.php.

During the Cretaceous period the dinosaurs died out.  Some scientists believe the impact of the meteorite hitting Earth threw so much material into the atmosphere that light from the Sun was blocked for several years. Without sunlight to promote photosynthesis, growing plants diminished in quantity. Gigantic animals (such as dinosaurs) requiring great amounts of plants were unable to obtain food needed for existence. The large carnivore dinosaurs which fed on them, having their herbivore animal food supply die out, also ceased to exist.

When the volcano Krakatoa erupted in 1883 the resulting atmospheric cooling caused what was termed a year without summer. Sunsets were blood red for 8-years after the eruption. It made the loudest noise in recorded history and could be from several thousand miles away. An impact like Chicxulub would be thousands of times larger than the Krakatoa volcanic eruption and keep the atmosphere dark for perhaps twenty-years or more.

The Zanesville Crater/Astrobleme located at the northwest section of Zanesville, Ohio was discovered in 1993 after an oil company worked on test drill sites. The buried crater, as big as Meteor Crater in Arizona, was estimated to have occurred over 30-million years ago and subsequently filled in due to weathering and erosion.
Read more at: http://www.irenebaron.com/irene_baron_blog1/meteor_crater_of_north_zanesvilleohio/
The Serpent Mound Crater of southern Ohio is another meteorite impact site with a 7-mile diameter crater.
Read more at: http://www.irenebaron.com/irene_baron_blog1/asteroid_impact_at_serpent_mound_/

Discovered by seismic drilling was the Canadian Bow City Crater at less than 70-million years old. The contour illustration below shows higher elevations indicated by warmer colors with lower elevations the cooler colors. SciTechDaily.com published the drawing on 5 December 2012. http://www.wired.com/2012/12/buried-bow-city-impact-crater/. Exploratory drilling investigations of the site were to have begun in 2013. 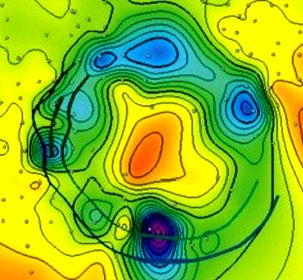 I believe there are probably tens of thousands of such buried craters yet to be discovered in serendipity types of situations. Had drilling not taken place above the Zanesville Crater or the Bow City Crater, they would not have been discovered.

When you count the craters on the surface of the Moon facing Earth, you would find thousands. The back side of the Moon facing away from Earth has over 10,000-craters. If Earth had no atmosphere, the craters on the planet would have not undergone weathering and erosion and would still be visible. It is quite possible that the Moon’s gravitation attraction pulled meteorites into it and kept some from hitting Earth.

Craters on the surface of Earth have either been identified by geological investigations or by sightings from space. Many were undiscovered until identified by astronauts.

A good source for  impact crater images is the Canadian site: http://www.thelivingmoon.com/43ancients/02files/Earth_Images_09.html.