Predictions Wisemen would have made about the 2017 total solar eclipse are italicized.

NOTE: During totality of this total solar eclipse, Earth observers will be able to see planets Jupiter, Mars and Venus.  Their presence changes predictions Wisemen would normally offer during an eclipse.

WISEMEN OF THE BIBLE
Throughout time, Wisemen of Bethlehem have been known as alchemists, astrologers, astronomers, emperors, kings, magi, magicians, mathematicians, priests or wizards, depending upon their repertoire of actions. They interpreted celestial events in ways we can observe from drawings and documents they left behind. From ancient temples and rock carved scripts, civilizations from Egypt to China have provided clues as to how they interpreted celestial events. They believed whatever happened in the sky foretold what would happen on Earth. With the limited knowledge of the times, these early astronomers and astrologers relied on the heavens for their wisdom.

Their ancient Moon god, the god of intelligence, prophesied what would happen in the future based on its position in the heavens and by what happened in space near it. Beginning with the Babylonians who created the Zodiac, people of that part of the world, including the Wisemen, believed the importance of any celestial event involving the Moon was magnified since the Moon was considered to be the source of all knowledge.  It had been considered important through many civilizations. Solar eclipses cannot happen without the presence of the Moon.

Calendar dates were significant to Wisemen. Mondays were ruled by their Moon god. The total solar eclipse of 2017 in the United States will occur on a Monday.  Because of this, the ancient Wisemen would say that the importance of the eclipse would be magnified. Although considered the source of intelligence, knowledge, and keeper of calendars, because it will be with the Sun, the interpretation by Wisemen would be also for greetings, health, and happiness for everyone while establishing foundations of the throne of the king or ruler. According to the ancient Wisemen, in the presence of the Moon, whoever is in power on Earth would have a stronger foundation.  The Moon was supposed to carry the fluidity of life, the rhythms of nature, human emotions, health, and influenced the subconscious mind. 1 Citizens of Earth may have their life flow smoothly, nature remains the same, emotions may be stable and the subconscious mind may be affected. Or, they may be affected adversely.

These ancient astronomers believed constellations behind the Moon, Sun, and planets changed the interpretations and meanings of events.2

If the Moon disappeared, as it does during the New Moon phase when solar eclipses occur, Wisemen would say an invasion of a major city could take place.

Planets carried special messages to Wisemen. During the 2017 total solar eclipse visible in the United States, Venus, Mars and Jupiter will be visible near the Sun as illustrated.. 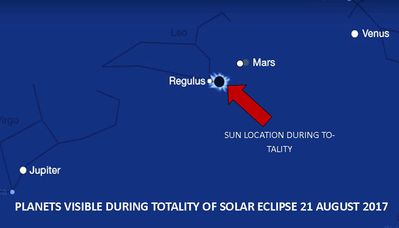 Wisemen used positions of their “traveling stars”3 to make predictions. They thought all objects of light in the sky were gods and stars. The word planet was derived from the meaning, “wanderer,” because some stars moved through the sky along the ecliptic while true stars remain stationary. 4   The ecliptic is the plane of the Sun’s equator. Their “wandering stars” are now called planets and known to orbit the Sun.

SUN:
The Wisemen of the Bible believed the Sun god had no equal. Considered powerful and dependable, the orderly Sun was determined to be the source of all authority. When interpretations of events were made by Wisemen, if the Sun was involved, it meant there was universal approval of the event. They believed the Sun created day and night, laws, and social order. The round, shining Sun was understood to be a bridge between Earth, the heavens, and everything sacred to them. It was considered a symbol of the spirit, associated with creativity, mental concentration, self-awareness and self-expression.5

At the time of Christ’s birth there was a total solar eclipse which was interpreted to mean the Sun god bowed to become subordinate to the Child being born. This was accomplished by the Moon, god of all knowledge, moving in front of and hiding from view the strong and important Sun god while Mars was present in the sky, as it will be during the 21 August 2017. If the Wisemen were to make predictions for the 2017 eclipse, they would say that newborns would become more powerful as adults if born near the time of total solar eclipse. Mars will become visible during the total solar eclipse at the upper right of the Sun. Wisemen would state Mars watches over the universe to ensure nothing will interfere with happenings on Earth.

VENUS:
When the Moon totally covers the Sun, Venus will be visible. Venus is the closest planet to Earth. It was considered very important due to its brilliance.  Any event occurring when Venus was visible in the sky was interpreted to affect royalty, nations, agriculture, health and the outcome of wars. Believed to be god that started astrological forecasts of the future, Venus is the god of love, beauty and harmony, and rules the constellation of Taurus. The Babylonians believed the god brought sympathy and pleasure.7   Having Venus in the sky meant a change in royalty, nations, and the outcome of wars.

MARS:
Due to its red color, Mars was thought to be covered with blood and considered to be the god of war.8  As such, it was associated with the horrors of combat. The more important the military was to a country, the more important Mars became as the war god. It was also viewed as an agricultural god that protected the harvest against disease and bad weather.

Mars ruled over Judea. Any astronomical event of Mars connected with Judea was to be considered positive. Mars was involved in celestial events which preceded the birth of Jesus Christ as part of the heavenly birth announcement. The presence of the planet intensified astrological implications and gave more magnificence to the birth of the new God. When Mars was near Venus, it meant that victory was near. Mars will be near Venus during the eclipse. Mars was known to be practical rather than hold ideals.9  Its presence meant those being born would become leaders, sportsmen, have sharp perceptions and make incisive decisions.

JUPITER
Jupiter was an important celestial god to the ancient astronomers because it was the largest “wanderer” crossing the heavens. After the Sun and Moon, Jupiter was considered the god of gods and protector of Earth. Jupiter was believed to be the creator of the world and natural laws, the king of kings and a fortunate omen in the sky.11    Jupiter created order. Seen during a solar eclipse meant there would be peace. The planet was the principal god relating to protecting the rights of humans. 12   It ruled the councils of other star gods with wisdom, benevolence and justice, showing compassion when needed. Considered generous, truthful, cheerful and friendly, Jupiter was believed to be a philosopher who made long journeys. The Assyrians believed if Jupiter was near or involved in an eclipse, the king (leader) involved would have peace and his name would be honored. 13

Since Jupiter will be in the sky and visible during the eclipse, the omen would be that there would be good things happening and the Earth would be protected. 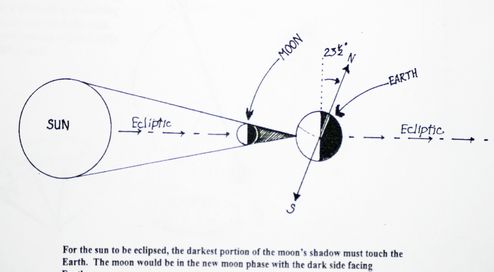 During a solar eclipse, the darkest shadow of the Moon touches Earth. Only persons within that umbral shadow will see a total solar eclipse.

Celestial: Pertaining to objects beyond the surface of the Earth, such as the Moon, Sun, stars and planets.

Eclipse: Occurs when a closer object blocks the view of a more distant object.

Ecliptic: Equator of the Sun extended outward to create a 360o plane in which the known planets of our Solar System travel.

Jupiter: Largest planet yet found in our Solar System. In ancient history, Jupiter was known the god who created Earth, the natural laws within the universe and holder of all astronomical knowledge.

Plane: Flat area or line, such as the Ecliptic Plane extending in all directions from the Suns’ equator.

Umbra: The perfect shadow of an opaque object, such as a planet, when direct light from the source of illumination is removed.

Traveling Stars: Known as wandering stars to the Wisemen, we know them as planets. Actual stars remain stationary in our dark sky while planets move/revolve in their orbits around the Sun following the ecliptic.

Zodiac: Created by the Babylonians to create interpretations of celestial activity. The original zodiac was a ring of constellations dividing the ecliptic into twelve equal sections. Zodiac sings in later temples and tombs are Egyptian. Since the Greeks also lived in Egypt, the Romans considered the zodiac to be Hellensistic or Greek. The National Aeronautical & Space Administration recently added a thirteenth zodiac sign called Ophiuchus.

Irene Baron is author of the award-winning,  nonfiction book, Unraveling the Christmas Star Mystery-A Validation of the Holy Bible. The text addresses all the interpretations made by the Wisement concerning the Christmas star. They were adapted to create the predictions stated in the above text. The book has endnotes, a glossary and a reference list. Learn more at www.irenebaron.com 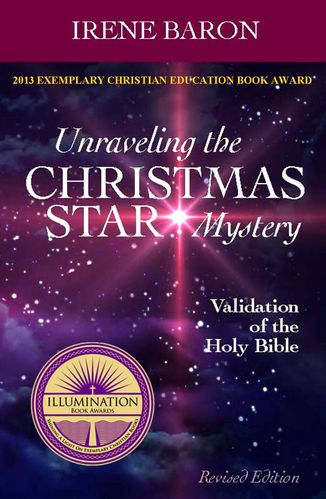