The most memorable angelic intervention I encountered happened when I was fourteen years old. I have told less than ten persons about that event until now. 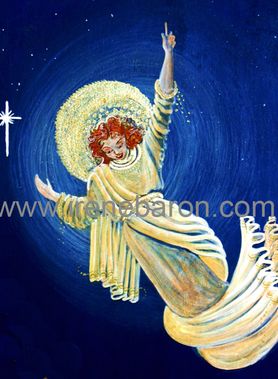 Telling of heavenly intervention can be intimidating. You can never be sure how others will react. People experiencing something unexpected often laugh. Laughter can also be interpreted as derision of disbelief. To open to others what happened gives them the opportunity to mock. I have tried in my life to become closer to God. By this testimony, I witness to you one way He answered my prayers.

I grew up attending Coburn United Methodist Church in Zanesville, Ohio. I was involved in Sunday school classes, worship and Methodist Youth Fellowship. I don’t remember when the desire began, but as a child I wanted to become a nun.

Knowing nuns were Catholic, I began to learn more about the Catholic Church. I asked many questions of Catholic friends. During many discussions with pastors at summer church camps, I tearfully discussed whether I should follow this calling. They always advised I pray before making any decision. The pull to be a nun was great. They were in the lowest level of the Catholic Church hierarchy. Not recognized as clergy or church attendees, they were called ‘consecrated religious.’ That meant they took vows of poverty, chastity and obedience.

What was difficult for me was the attitude of my parents. My Mother had been raised in the Catholic Church and school. My Father did not appreciate Catholicism and forbid me to date a Catholic as a teen. After their marriage, my Mother never attended the Catholic Church again. She attended Coburn during most of my school life and then became a Lutheran which had formal services similar to a mass.

When I had 3-years left of high school before deciding what to enter as an occupation, I was in agony over making a decision. I prayed constantly to God to help solve my dilemma.

I contacted Father Drury of the Catholic diocese to study Catholicism. I had to do so in secret, fearing what my Father would say or do if he found out. Father Drury was kind and considerate. He understood why I was taking instruction and arranged for me to take private lessons with him several times a week. I learned much.

Still, I was confused about my future. I continued praying for guidance. The decision I was contemplating would affect the rest of my life. I would become Catholic and a nun or not. What to do consumed my thoughts. I was in agony trying to make the right choice. I needed heavenly guidance.

It was at this time in my life I received a holy visitor. One evening when praying, giving thanks and lamenting my predicament, a holy visitor moved me from my bedroom to an unrecognized location. I was on my knees in front of him. He was in human form dressed in an ankle length, white robe of thick material. There were many folds in his robe. A light enveloped the space around us.

The holy angel reached down for my hand. I placed my hand in his and saw that my hand was smaller. He lifted our hands and I stood beside him. I did not look up to his face. It was far above me. Thinking back to that time in later years, I realized he must have been over 20-feet tall. He did not talk. Instead, he led me to some steps.

The steps were white, had a rise of about 8-inches and a width of about 10-feet. The lower several steps were curved to the left. We ascended a straight stretch of about 15-steps. I was still looking down, seeing the lower part of his robe and his bare feet as he moved up the steps. He led me to an open doorway on my right. The doorway was about 10-feet high and 5-feet wide. When I looked in the direction of the doorway, I saw only a brilliant light shining out. It was a holy light, brighter than the Sun. It did not hurt my eyes. I understood the light was shining from our unseen God. I did not step through the door or approach it in any way. We didn’t move. As he held my hand, I stood and looked at the brilliance beyond me. I was in the presence of a holy messenger who had guided me to see the light of God.

There was no verbal message. I understood my prayers had been heard. My calls for help had been answered. I had asked for help in making the decision, should I become a nun or not?

I had been taken to a place of God. I was shown there was a God. My laments and prayers had been heard. I was not given any answer to my question, but shown the presence of God. The understood message was, it made no difference whether I became Catholic or remained protestant. We worshiped the same God. I didn’t have to become a nun to worship my Heavenly Father, also called the Ancient of Days and the Lord of Spirits. I could remain a protestant.

We didn’t walk down the steps. We were instantly moved to the location where I first encountered the angel. He still held my hand. I was still standing. He let go of my hand and was instantly gone. The light around me remained, but gradually disappeared.

I looked around and found myself standing in the center of my bedroom. Although dark outside and with no lit lamps, it was light enough for me to see everything. I continued preparations for my night’s rest. The image of the holy angel and the events which took place that night never left me. I often pondered the miracle of receiving a message from God. Most interventions I had experienced were with invisible beings. This was the only time I experienced an angelic messenger who could be seen. I continually feel blessed knowing my prayers had been heard. The messenger let me know the decision for a career remained with me. I need not become a nun. There would be other ways I could be used by God to enrich my life and the lives of those around me. I withdrew from Catechism.

I learned later in life that I had been prepared in my studies to discover the Christmas star. I did so after receiving 68-astronomy computer programs from NASA JPL. They had been posted in two shipments to my Zanesville address with no letter or information. They were used to discover the Christmas star.  The discovery steps and results resulted in my first published book, a nonfiction book named, "Unraveling the Christmas Star Mystery." It received an First Place, Gold Medal award as the best Christian Education Book of the year it was published. The award was received in 2014.

The second book, "MARY KNEW -A Biography of Mary from Ancient Scriptures," was written using ancient scriptures of Apostle James whose eyewitness testimony documented the life of Mary, the mother of Jesus Christ. That book was written in the historical narrative style for ease of reading. That book was one of the top three Christian biographies for the year. The award was received in 2019.

When I was a senior in college, seminary students there conducted a poll. They asked students if they believed in God. I answered with an emphatic, “Absolutely.” A month later, another seminary student stopped me on the sidewalk and wanted to know why I was so sure there was a God. I did not go into detail, but replied I had experienced a vision proving the existence of God. We talked for a few moments before he commented that every student at our college who had emphatically confirmed there was a God had experienced angelic intervention in the form of a vision.  How wonderful to know Hiram College was attended by Christians.

Since that time, I have found my life to have been guided. Unexplained events have happened to ensure the direction of my life was with God. Others have told me they feel closer to their God and savior, Jesus Christ, through my works. My most guided work was writing the nonfiction book, Unraveling the Christmas Star Mystery, which presents information not previously known about the Christmas star. The verification of the Christmas star was through using NASA-provided astronomy programs and much research.

Our Lord God is the most Supreme Being in the universe. He created all that is. When you pray, thank him for your days and spirits, including your soul and the Holy Spirit within you. Let your prayers of thanks be continual for His existence, His heavenly hosts and the wonders of His creations.

NOTE: If you have encountered a heavenly presence during your lifetime, I would enjoy knowing about it for a future publication.
Leave a comment below or email me at: irenebaron@irenebaron.com