There is an impact crater in Ohio designated as a memorial site. Ancient Americans created a serpent shaped mound, 0.5 miles long, at the site.  The serpent, with an oval in its mouth, has been interpreted to represent a comet or meteorite which fell from the sky onto the ground at that site.  The curving part of the serpent is to represent the tail of the object as it moved to Earth. 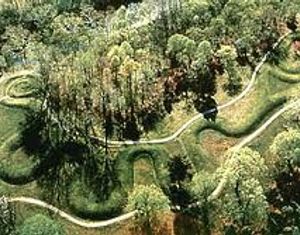 d may have been built by the ancient people to tell future citizens what happened at the site. The mound is not at the center of the disturbance, but near the southwest region. Note the Ohio Department of Natural Resources map below.

Using the disturbance of rock layers, it has been estimated that the asteroid or meteorite impact that created the crater at Serpent Mound in Adams County, Ohio took place about 345,000,000 million years ago. The impact devastated an area the size of the state of Ohio. The asteroid  created an impact crater over 6-miles in diameter and fractured rocks in the Earth to a depth of  two miles into pre-Cambrian bedrock. Over 7-cubic miles of earth was disturbed over a 12-square mile area. The central part of the crater was uplifted over 1000-feet.

The asteroid causing the crater may have weighed approximately 2-billion tons. High concentrations of the element iridium have been found in core samples from a depth of a thousand feet. The iridium concentration in the drilled core samples was found to be ten times the normal rate found on Earth. Iridium is usually found on Earth at meteorite or comet impact sites where there have been extraterrestrial sources.   The Ohio Geological Survey at the Ohio Department of Natural Resources reported the drilling cores found deformed sand grains at depths over 1000-feet and a black material similar to scorched limestone. The deformation of quartz sand is similar to that found when quartz is compressed at high pressures and partial melting occurs, a normal feature at meteorite impact crater sites.  There is a slight magnetic anomaly (1 %) within the crater. There have been later anomalies found which have been attributed to metal towers and other manmade objects.

In North America, the Ohio Serpent Mound is comparable to Britain's Stonehenge and Peru's Machu Picchu as one of Earth's large and most mysterious manmade structures. Whoever built the Serpent Mound may have been trying to tell future visitors what happened to the area.

The asteroid theory is the one most accepted due to the evidence found at the site. This is in southern Ohio in a rather isolated area. Being a state memorial site, it is well taken care of. The site is one you may wish to include on any trips as you travel throughout the United States. 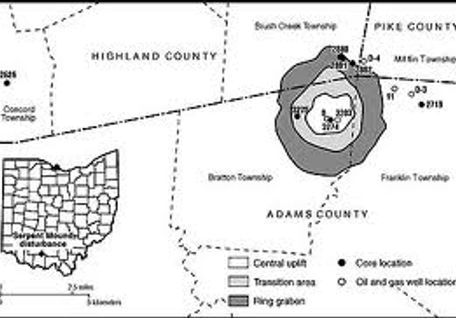