It was an honor to be invited to a monking ceremony in Bangkok, Thailand where I worked for almost five years. An office friend was becoming a monk for 10-days. The shortest time period allowed by his wat, or temple, was 3-days. It is tradition for a Buddhist male to become a monk, a rite of passage, to officially become recognized as a man. This must be accomplished before marriage. Most monking ceremonies take place during the dry season when rice fields do not require heavy labor.

My friend worked in the building of the Office of the Secretary of Defense, Advanced Research Projects Agency, Research & Development Center-Thailand. The title was usually abbreviated: OSD/ARPA/ R&D Center-Thailand and was headquarters of the U.S. Supreme Command for ARPA’s classified research.  Persons working within the facility of any nationality were well educated and maintained high security clearances, whether military or civilian. 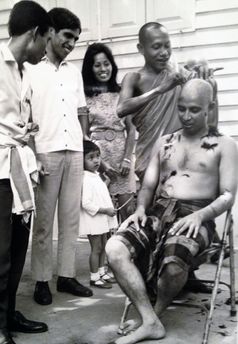 The monking ceremony was set for a Saturday afternoon at a Buddhist temple I’d not visited. I arrived in time to see my friend having his head shaved, part of the traditional ceremony. Buddhist monks have their heads shaved once or twice a month, usually during full and/or new Moon phases. To become a monk, the head must be shaved before the induction ceremony.

When I asked why his head was being shaved, Every English speaker helped in telling me there are evil spirits everywhere. Evil spirits are stymied when entering Buddhist temples because entrance doors are constructed narrower at the top. Evil spirits hit their heads at the threshold and are not be able to enter. Temple roofs have carved, wood hooks upon which evil spirits will be caught and captured so they will not enter the temple.  The head of a human has hair which evil spirits can grab and hold. To eliminate the possibility of having an evil spirit grab the hair of holy monks, their heads are shaved.

Those watching the head shaving asked, “Do you believe in evil spirits?” As a Christian, I answered, “Yes,” for there are many stories in the Bible of evil spirits being removed from persons.

My barefoot and bare-chested friend was sitting on a foldable, metal chair in the grassy shade of a large tree. Friends and family surrounded him. All ages of family members were present along with his beautiful fiancé. A young monk who belonged to that temple was shaving my friend’s head using a straight edge razor. The monk candidate wore only a knee-length sarong, a tube of cloth he has stepped into and secured around his waist.

Sarongs worn by men and women of Southeast Asia are usually sewn up the side to create a tube. The wearer steps into the tube, pulls the top to the waist or above the breasts, and secures it with a rope or knot. Most sarong materials are hand woven cotton in brightly colored plaids or printed designs.

After his head was shaved, he departed to dress for the monking ceremony. Those who gathered on the lawn visited with new arrivals. Until members of my office staff arrived, My friend’s family and friends spoke to me in English. I was taking Thai language lessons, sponsored by Battelle Memorial Institute, my employer, but had not become proficient in the language.

I noticed most arriving families carried gift-laden trays or baskets resembling American Easter baskets. Each basket was about 2-feet in diameter at the top and filled with unwrapped gifts. The gifts included: a woven sleeping mat, blankets, flowers, extra saffron-colored cloth for monk robes, rolls of toilet paper, bars of soap, wash cloths, towels and packaged food. The trays and baskets were covered in clear cellophane, gathered and secured at the top. That I had no gift was humbling. Feeling empty handed and embarrassed, I asked about the gifts. I was told to not worry about not having a gift because everyone knew farangs didn’t know or understand why the gifts were necessary or needed. A farang is any foreigner to Thailand, usually a “round eye.”

A monk’s status is that of a mendicant with no personal means of support. They must seek alms for food, clothing, shelter and medicine. Persons within the temple community, the sangha, offer alms as an act of faith and respect. After becoming a monk, my friend will be allowed to collect, receive and consume food only between dawn and midday. He can drink water, and usually clear tea and coffee, at any time. The baskets offered at the monking ceremony will supplement his needed supplies during his existence as a monk and be shared within the temple.

There are rules and regulations concerning conduct and etiquette within the monk community. After Buddhist monk vows are taken, high luxury items such as beds and chairs will not be used. Like most Thais, he will squat to sit on his heels. Monks normally sleep on a mat or blanket on the floor. They do not use television except for a Dharma video or documentary program. During the time he is a monk he will be celibate and must be accompanied by a man whenever in the presence of a woman, on a journey or seated anyplace outside the temple area.

At the appointed time, a decorated chair on an elaborately flowered platform arrived. The monk candidate, walked within the midst of growing guests. He was dressed in a white robe. As he was being seated on the platform chair, everyone gathered nearby with their gifts. Many women carried paper umbrellas to protect them from the hot, tropical Sun.

The platform was lifted by six-men who began to carry it around the temple. Everyone else followed, talking and visiting while children played or ran around the marchers. We marched around the temple a symbolic three times. The monk candidate was lowered to the ground at the temple entrance. He remained outside until guests entered the sanctuary and were seated on the floor along the walls

Once everyone was settled and quiet, my friend walked into the temple with a retinue of monks. His mother and father followed, his father holding saffron-colored material w 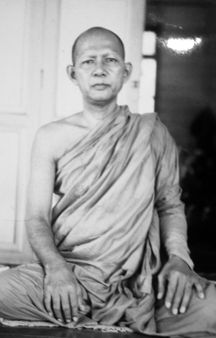 hich his son would wear as his holy garment. After prayers and discussions with the high priest, the retinue of over ten-monks surrounded my friend, hiding him from view.  At a comment from one monk. his father stepped forward with folded saffron-colored cloths and passed them to one of the monk. In return, the white clothing he had worn had been folded and was passed to the father. His father held the clothing and took his seat with his wife.

After the saffron robe was wrapped around him in the correct manner, his retinue of surrounding monks divided to show my friend in his new attire, that befitting a monk of his status. He smiled at everyone. There were more ceremonies before he was introduced to the crowd in his new capacity as a monk. The gifts he had received were placed on the sanctuary platform/stage upon which sat two of the eldest temple monks.

When the ceremony concluded, everyone went outside to visit with one another and partake of refreshments. The refreshments included white, sheet-cake with white icing and a refreshing fruit drink in small glasses. Family and guests passed out the refreshments to seated and standing guests, most of whom departed within a half-hour.

Living and working in Thailand 4+ years, I became friends with many beautiful and memorable Thai nationals. In the process, l learned more about Buddhism and Hinduism. The majority of Thais were Buddhist. The Indian persons with whom I worked were primarily Hindu. There were also Christians and members of a few other religions within my business and social networks. 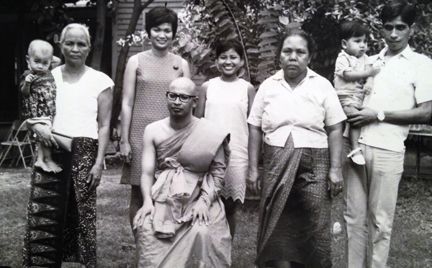 When I applied to Battelle Memorial Institute for the position of Information Specialist, one of the several jobs offered to me was one in the newly forming office in Bangkok, Thailand. I was asked to work with information for RACIC, the Remote Area Conflict Information Center in Columbus, Ohio.

I was informed that my undergraduate course work in world religions was a key factor in my being hired for that position. Personnel in the Battelle human resources department believed anyone who had studied religions of the world would be more tolerant of those who worshiped in ways different from the majority of citizens in the United States. Being assigned to work in a country with few Christians, I needed to understand and respect persons of other religions.

I had also studied a variety of sciences in undergraduate and post graduate courses which enabled understanding across the spectrum of science knowledge. Many persons are vested in one field of science and cannot easily relate their subject of study to other fields of science, a limitation. My fields of study included: astronomy, biology, chemistry (general, qualitative, quantitative, and organic, etc.), geology (including physical), invertebrate zoology, meteorology, mineralogy. morphology, oceanography, volcanology, zoology and associated math courses, I had one home economics/cooking course set up by General Foods which required an organic chemistry prerequisite to study what happens to foods when you cook and why. That was an eye-opening class which helped me appreciate cooking Thai food.