Did you know that chairs have been designed to be uncomfortable?

I was reading the 11 May 2015 Bloomberg Businessweek, The Design Issue , "Pretty vs. Useful-Where form doesn't follow function" and vice versa. I saw an image of the Gio Ponti “superleggera chair, No. 699” which was sold in 1951. This chair, manufactured in Italy, is now a museum piece at the Vitra Design Museum and considered a classic. 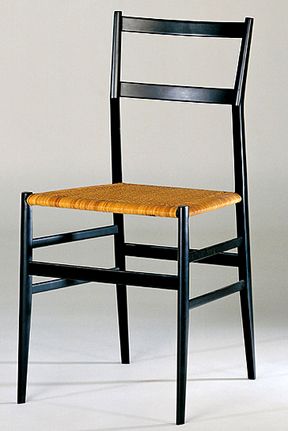 Bloomberg Businessweek magazine quotes Mr. Jay Osgerby (co-principal, Barber & Osgerby) as saying, “Gio Ponti’s design is the most beautiful chair ever made – and totally uncomfortable. It’s fine if you think sitting on a chair is the same as sitting on a stool.”

If you are like most people, and perhaps Mr. Jay Osgerby, you might wonder why someone would design a chair to be uncomfortable.  I never knew that chairs had been intentionally designed to be uncomfortable until I met a designer while surfing at Redondo Beach, California.

In the 60-s I lived on the Esplanade above the beach at Redondo and surfed in the Pacific Ocean most days after school. On the beach the crashing waves were loud, especially when the surf was up. But out beyond the waves while sitting on your surf board it was so quiet you could hear a whisper. So, while waiting for the “seventh big wave” or a “good one,” many of us talked as we straddled our boards and got to know one another. One fellow seemed very nice and asked me for a date.

On our first dinner date we discussed the restaurant we were in and the fact that red colors were used within it. My Mother, an interior designer, warned her customers that putting reds colors in the kitchen would make them gain weight and explained the psychology of those colors. Reds increase the appetite. One woman didn’t believe her and had red put throughout her kitchen. Within eight months the woman returned to my Mother to have her kitchen redesigned in another color. She had gained almost 15-pounds! Remember this when you next eat out. What red colors do you find in restaurants and for-profit eating areas? Will you let them influence your food order? Restaurateurs are hoping they will.

On our outing I asked my date about his profession. He stated he worked with a design firm. When I asked what he was currently designing, his reply was so intriguing that I was stunned. I’d never heard of such a thing.

I said, “That’s the stupidest thing I ever heard of. Who would want to buy uncomfortable furniture?”

hen he explained about national, fast food restaurant chains. He said that the food chain he was working with required his firm to design chairs, stools and booths that looked extremely comfortable. They wanted to entice people to enter the restaurant and look forward to sitting down in a comfortable and relaxing chair to dine. However, the company didn’t want the customers to stay seated after they had eaten. They wanted their customer to arrive, place and receive their counter order, sit, eat, and immediately leave.

Now, this is where the uncomfortable chair design comes in.  After looking forward to being seated in the beautifully constructed seat the customer would sit down and look forward to enjoying their meal. Subconsciously they knew they were in a well designed seat, but they were uncomfortable. My new friend told me that most people wouldn’t figure out why, but they couldn’t get comfortable. Perhaps the back of the chair hit them in the wrong place, the angles of the back or seat may have been off, the depressed seat carving wasn’t right, or something. For whatever the reason, they didn’t fit into the chair and became anxious to get out of it. They didn’t feel like sitting around over a cup of coffee to talk. So, as soon as they finished their meal they left the establishment.

This is exactly what the national restaurant chain wanted to happen in all their business franchises, a fast turnover. Get ‘em in and out as soon as possible. Don’t sit around and visit. Buy, eat, and leave. No chatter. No relaxation. No lingering. We have your money, now eat and leave. Make room for more customers.

So, the next time YOU go to a fast food restaurant, take a good look at the seating areas, even the booths, if there are any. (Notice the red, orange, or burgundy colors within the establishment.) Then try the chairs. Can you analyze why they’re not “quite right?” Where is it exactly that they don’t quite fit the human body? Is it the seat height? Size? Angle? Back? Or… what? Do they look comfortable but make you want to get out of them quickly? Remember, there was a reason for their design.

One of the big fast food chains recently stated they are planning “liberating moves” in their bureaucracy to increase business. Perhaps to “move” you in and out more quickly? When they say they are “restructuring” I wonder if they will offer updated and even more uncomfortable “restructured” furniture. They’re counting on business analysts to help them in their “fast turnaround.”

Before I met my gentleman friend, I had no idea that fast food chains designed their furniture to make people uncomfortable and want to leave. I always thought that If I owned a restaurant I would want seating that people would enjoy. Yet, for cost effectiveness, perhaps I would have to reconsider and not want them to linger forever after their meal. So what’s a restaurant owner to do? Let people stay and occupy the area forever to stop others from entering the business? Or plan ways to make them move out? Or something else?

With this in mind, I can understand why there are food establishments in European countries that charge not only for the food but for the minutes spent in the establishment. That would solve the problem, wouldn’t it?

Henry Meyer and Benjamin Katz reported in the 18 May 2015 Bloomberg Businessweek about a Moscow pay-by-the-minute cafe. London’s Ziferblat café with clocks all around the establishment, charges by the minute (5 pence per minute). Meyer and Katz report there are 13 such cafes in Russia, Sovenia, the U.K. and Ukraine.

Shall we expect such franchise establishments in the United States? Could it be possible that stateside restaurants would let you linger if you paid by the minute? No more uncomfortable chairs? Give you time to talk in a cozy place with friends? Would it work? Or would customers balk at the idea?

Do you think Gio Ponti designed his chair to be uncomfortable?