When I originally visualized the Christmas mural final image, it contained angels. There have been several sequences of designing the finished mural. Three different configurations of angels were discarded, which is fine. I have been creating an alphabet book of angels using the Russian icon style of art. I have so many books and references for angels, I will enjoy painting them later as I complete that book. The final Christmas mural illustrates the Holy Family and the Christmas star.

With Mary having been strictly raised for 3-years by her parents prior to being raised 13+ years in the Jerusalem Temple, I expect she was not extravagant in her clothing. I designed her appearance wearing basic clothing a traveling woman in that time of history might have worn with a cape or cloak. Having lived her decades in the Jerusalem Temple and having communed daily with angels who fed her, her attire was surely basic.

Mary’s parents knew before her birth she would be the mother of the Savior of mankind and had to be treated as such. Mary’s parents were instructed by a messenger of God as to restrictions on what and how to feed her, who she was allowed to associate with and where she was allowed to go. Directions concerning the feeding and care of the Christ Child, who was more important, was most likely presented by angels talking to Mary and Joseph prior to His birth. God would not want His Son nursed by anyone impure.

Nursing the Christ Child was not an option. It had to be by the pure mother, Mary. Therefore her clothing in my drawings/painting reflect such styles that a nursing mother would have worn. Her loose underdress had fasteners at the neck to release for nursing. Sleeves were contained at the forearm with ties so as to not hinder motion. A cloak was worn to provide warmth and protection from wind when traveling and for comfort when stationary. They were in an open cave in early December. It was cold. They had 9-months to prepare clothing for Mary before and after the birth and during travel. 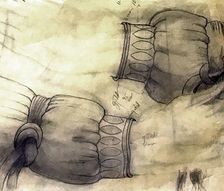 Joseph was a carpenter who built homes and buildings. His travel clothing would not have been extravagant.  I drew him wearing a leather jerkin over an ankle-length robe commonly worn by Middle Eastern men at that time in history. It is loose and covers the arms to the wrist. I could find no reference to using a bleaching method in ancient times. The clothing colors I used were for natural or dyed material. I am making his robe a buff color with a grey cloak. His cloak will have a darker border. Images of tiled decorations found on buildings show how persons dressed at that time in history. They show long sleeves on the cloaks, compared to the Middle Eastern, shorter cloak-sleeves used in the 21st Century.

In sketches, I originally planned to have Christ pointing to His Heavenly Father. That resulted in too much activity in that area of the painting. I wanted the Christ Child to be the main part of the artwork. I, therefore, had Joseph be the person pointing to the creator of the Universe, I AM, our God. To make the sketch, I had a neighbor pose while I took pictures of how I wanted the hand to look. 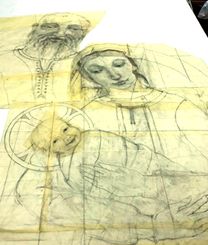 Positioning the family on the canvas changed as I worked. I moved it up and down and finally found the perfect positioning. Once that was determined, the figures were transferred to the canvas. Once transferred, I covered the images with a coat of matt medium to seal the lines. That would keep them from seeping into the paint and changing the paint colors.

Two-thousand years ago, astronomers thought every light in the night sky was a god. Except for the Moon and Sun, the rest were stars. The actual Christmas "star" was Saturn. It was therefore drawn to be round with light being emitted from it. I showed a cross in that light to represent his future death on the cross at Calvary. 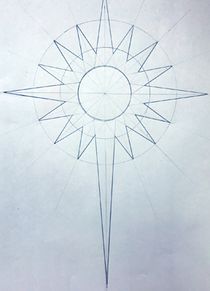 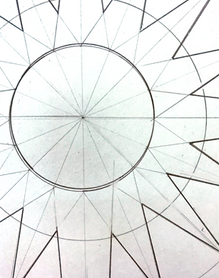