A Christmas mural being prepared on canvas by myself was in the stage of designing the canvas positioning where the Christ Child would be in relation to his mother during this last week. Determinations were made from Bible and gospel references. Information was gleaned primarily from the Holy Bible,  the Gospel of the Birth of Mary, the Gospel of James, also known as the Infancy Gospel of James or the Protoevangelium of James. His book was used in early Christian churches for hundreds of years.

Mary, daughter to Joachim and Anna, was raised to be the mother of the Savior who would save all humanity. Her parents were given this fact prior to Mary being conceived. They were told what to name their daughter and how to raise her. They were told she would have the spirit of the Holy Ghost within her at the time of her conception and her Son would be the Savior to save all humanity..

From birth to the age of three, Mary was raised to not interact with anyone not pure and to eat only pure and wholesome food. When she was dedicated to the temple at age three, she communicated daily with angels and was fed by their hands. She spent most of her time within the Holy of Holies area of the temple. The temple priests and workers must have been awed at the holy hosts who attended her. It was during those formative years that she made a vow to God to never lie with a man. She remained at the temple until a teen.

How do you create an image of someone so pure? Her expression should give an indication that she would never do anything wrong. Her face should look timeless, yet accurately show her age as an older teen, about 17-years old.

I previewed many images of Mary that have been made, by famous and not so famous artists over the centuries, to glean the best from each. The painting I am making must be the best I can do. I have painted figures before, but not in detail or in realism. I hope my thoughts, perceptions and ideas are guided to make the final painting a good one.

Each starts with a drawing on buff-colored, translucent architectural paper. I use that type of paper as graphite can be easily erased without the paper falling apart. Needless to say, my sketches had many erasures.

Being an experienced artist and art teacher, I taught human proportions this last month to a group of adults at the Zanesville Art Center. I had taught that subject many times before, but paid particular attention to my presentation as a reminder and in anticipation of the work for this mural. 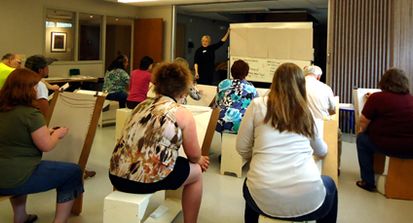 The face of Mary has been made with all proportions found standard in the art community. I wanted her to fully face her audience so they may visualize her perfection in the sight of God. She should show a serene attitude.

Could I make her image show understanding of the depth of her calling by God? How do you show that her body, holy from conception, would have been perfect for the residence of Christ during gestation? She had never eaten anything impure. She had never heard or seen rabble rousers or been put into a position where there could be negative thoughts or rumors or hearsay about her. Everything anyone had ever known about her, up to leaving the temple as an older teen, was that she was truly a child of God.

All of Galilee knew about her and her destiny by the time she was one year old. She was a very famous child.

Her clothing in this mural had to show her to be a person of that time in history. I planned to have her wear an under headdress of thin material to stop dust and debris from travel. Her over headdress is to be painted to appear heavier and long enough to be a cape and wide enough to wrap around her for warmth. After all, it was early December when Jesus was born. You can read how the birth date was found through NASA computer programs in my nonfiction book, Unraveling the Christmas Star Mystery.

The clothing she wears is unlike that in other classical images found in art books throughout history. I never found a female artist. They were male and evidently didn’t know much about the actual birth of Christ or about nursing women. Artists of every nationality usually dressed Mary in elaborate flowing gowns.

In the Gospel of James, Apostle James said the baby sucked (at her breast) when born. He was at the birth site with Joseph and Mary and was an eyewitness to what took place.

Like women of today, she had to have clothing that would allow her to nurse a child, yet look like clothing of women who lived over 2,000-years ago. You will note in my sketch, I have made allowances for the clothing to be moved for the child to nurse. There is an inner and outer layer. The inner layer has a button type of attachment at the left and right so Mary could use either side of her chest to nurse. There is a heavier, outer cover with ties to hold the inner shell closed. This will definitely be an image of a nursing mother. 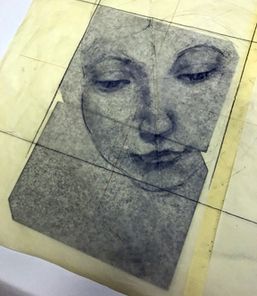 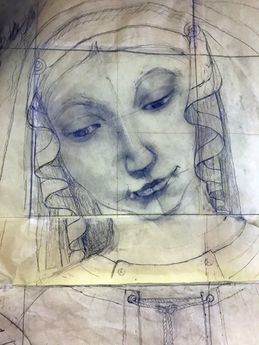 I am a colorist. The human eye can perceive over a million colors, shades and hues. On color tests I have earned a 100% in distinguishing these differences. Even though I have excellent perception of color, I hope I can create the colors I desire for my images. I have jars of acrylic primary colors and white. I may need a few more, The more expensive colors are not found easily in jars. With such a large mural, 6’ X 11’, I will need a lot of paint and extender medium. So, with colors I desire, I will start with basic colors and alter them.

I used to have a 24” X 36” color mixing chart which over the years and many moves was damaged. I ordered another one from the Dick Blick Inc. company (http://www.dickblick.com/products/magic-palette-artists-color-selector-and-mixing-guide/) . They had two sizes.  I ordered the smaller one with fewer colors but determined it would be adequate for my purpose. 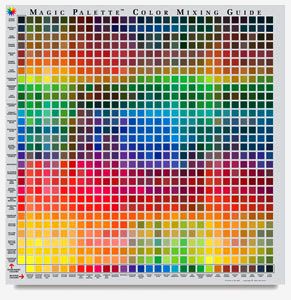 If you ever painted, you would know that sometimes you know what color you want and you waste time and paint trying to create that color. With a color mixing chart, I find the color I want and follow the color block column up and left to find the two colors used to make the one I want. Using such a system saves buying colors of unnecessary paint.

Most of my early art history was in charcoal, oil pastels, water color and colored pencils. I later took much course work in oils and acrylics. Colors I use should be true to my original ideas. As I sketch the images I am imagining the coloration of the folds and planning colors for the individuals within the mural, including the row of angels across the mural at the top.

I found the four white, work tables in the work room  too limiting when drawing the larger positioning of the characters. With one character flat on the table, I could sit in a high chair or stand to sketch. When I was positioning figures together to work out my concept, the angles were too great. The sketches were skewed. I had to put them on the wall and stand to work them.

I therefore taped the sketch papers together and moved them to a wall taping them to the wall with painters’ tape. The work is becoming to large to work with easily. I couldn’t reach high enough to tape the top in place. Even though the painters’ tape is supposed to release easily, it did not on the sketch paper.

This morning at church I requested the church custodian to place a small ladder in the room for my use. I had earlier borrowed a sturdy chair from another classroom, but it wasn’t high enough. I knew the two folding chairs in my small workroom would be too dangerous. You can see by the image below that I couldn't reach high enough to tape the top of the sketch papers.

In the image of Mary above, several sheets of black carbon paper were placed under the sketch. The lines were lightly drawn on the original sketch to place them on the canvas. Once the carbon and sketch were removed, you could see the main lines on the canvas. 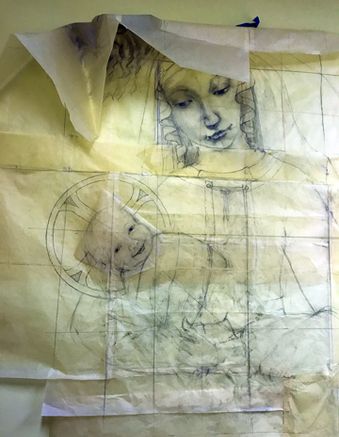 After looking at the positions of the images on the wall, I realized that Mary’s head needed to be tilted a little more. The one on the canvas will have to be erased and a new one applied prior to painting. Crumbled pieces of erasure are removed from the canvas with a light touch using a 3”-wide paint brush so I don’t touch the canvas with graphite covered fingers or leave finger prints.

Another image to your left is the placement of Mary and the Child Jesus before Mary's head is tilted. There are different papers taped together as the original is not wide.

The light lines through the center of Mary’s head represent the center of the 12” X 12” grid in which it is placed. Mary’s hands will be detailed this week. There will also be a blanket over the lower area of the Christ Child. The swaddling will show from his waist up.

I originally placed the Child higher, but lowered the Baby to allow for correct proportion of Mary’s arms. To do that, I just cut the section containing the Child off, inserted a paper horizontally, and reattached the papers with the Child. I think now the head of Mary and the Child are in better positions. When the sketches are completed, they will be transferred to the canvas. They will then be replaced to remain on the wall for reference.

When sketching just the heads, it’s hard to visualize the size of the finalized positioning. On the wall, however, the size of the canvas begins to be seen. To give you an idea of size, Mary’s head appears 7-feet up from the base of the canvas, Joseph’s head will be above hers to her right and canvas left.

The next session  will be to finish her hands, the blanket on Jesus and then begin Josephs’ clothing.

It’s coming along. I want it to be finished ASAP as I have another mural commissioned.