With the forecast to become the largest comet to ever whip around the Sun and pass Earth, Comet ISON has been greeted with cheers from the public and astronomy community. The hype has been that it will be spectacular. I sure hope so.

What will August bring?  According to SPACE.COM, for mid-northern latitudes of the United States on the morning of Aug. 21, ISON will stand 6 degrees above the east-northeast horizon at the start of twilight. The magnitude will only be around 13, so a telescope would be necessary. Depending upon how dark it is in your location, the magnitude visible may fluctuate. In dark locations, the human eye can see magnitudes of 6 or less. See more at:  http://www.space.com/22176-comet-ison-skywatching-august.html

Since it's discovery there have been several contradicting predictions about ISON. It has been predicted to be the largest comet to ever pass Earth,  the largest comet in the last 50-years, an average comet, or a fizzle of disappointment. It is very difficult to predict. It's a "wait and see" event. In the meantime, the expectation is like that of buying a lottery ticket, except this one is free. We know about the comet and are excited to see what's going to happen. Are we going to win the prize and see the rare sight of a magnificent winter event in November and December?

When comets sweep past our Sun they have to contend with the gravitational attraction of the Sun, the largest body in this system of Sol. That force of gravitational attraction has caused some comets to be pulled into the sun, to break apart, to disintegrate, or to lose much of their dust/gaseous mass. In addition, some of the comet dust and gases are pushed off into space by solar winds. In March of this year Alana Carshadi of the University of Maryland wrote that Comet ISON "was shedding a significant amount of dust, but a much smaller amount of water." http://www.umdrightnow.umd.edu/news/astronomers-take-closer-look-comet-ison . The amount of dust being discarded has been recorded by NASA as over 100,000 pounds per minute. The total mass is therefore becoming smaller as it approaches the Sun. If Comet ISON loses much  more of the gaseous mass, it will not grow the long tail as preciously predicted. Without a long tail, it will not be easily seen and may become another ho-hum comet.

The date ISON will be closest to the Sun is 28 November. After that date, photographs from observatories around the world will provide evidence as to amount of dust and gaseous matter left on the Comet. At that time we will know if ISON will become the large comet as first predicted.

The February NASA image below illustrates the comet orbit. It will be about 40,000,000-miles from Earth at it's closest point on 26 December 2013. 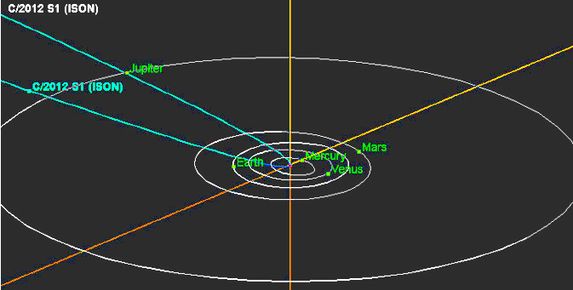 Amateur astronomers I know who are talking about it hope the shower will be full of meteors, perhaps thousands per minute. Again, like buying a lottery ticket, you never know if you're going to win. Perhaps it will be more like the Perseids meteor shower or even less. It is important to remember that Earth will be passing through the orbit, not the debris field of the tail. Earth did once pass through Comet Halley's tail with spectacular meteor shower results.

The down side? IF Earth is going to plow through Comet ISON, there may one day be a collision. That is true for any comet orbit we pass through. The up side? It has been predicted that ISON will gain such an increased velocity as it whips around the Sun that it will gain the energy it needs to leave our Solar system and not return. The space vehicle Voyager I is in the process of leaving our system this year.

I wish you clear skies for that crossing of ISON's orbital path. I suggest you view the skies 11-13 of January 2014 in case the trail of debris ISON leaves behind is wider than anticipated. Enter the dates on your calendar so you don't forget. After midnight is the best time to view meteor showers. I'm sure there will be more media coverage as the event approaches.