COMET ISON – WHERE DOES IT GO?

Comets are such interesting objects.  Because Comet ISON is expected to be very bright, it will become a great item of interest.

Children need to be prepared for what a comet is so they will not be frightened of Comet ISON.  I had a gentleman tell me this week that as a child he hid from a small comet under his bed and was afraid to go outside.  He did not understand what a comet was. If he had known about comets, he would have been outside watching it and enjoying the beauty of the object.

Comet ISON, like other comets and planets within the solar system, orbits our Sun.  The major planets also orbiting our Sun include Mercury, Venus, Earth, Mars, Jupiter, Saturn, Uranus, and Neptune. In the left diagram, each planet orbit is labeled with the first letter of the planet name. The yellow Sun is at the center of this system. The illustrative sketches in this blog article I drew with colored pencil. The distances between the planets are not to scale. 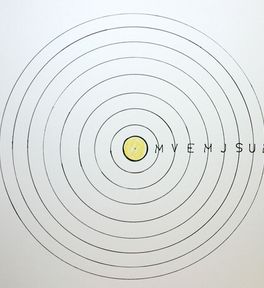 und the Sun are almost circular, similar to the illustration.  This illustrates the more circular orbital shapes. In reality, the orbits are elliptical. Circles have one focus point. Ellipses have two. If you were drawing a circle, you could put at tack at the center of the paper. With a string attached to the tack at one end and to a pen or pencil at the other, as you moved the pencil around the center keeping the string taut, you would draw a circle.

An ellipse is drawn with two tacks.  Make a loop of string by tying the ends with a knot. Put the loop around both tacks.  Place the pencil inside the string and pull it outward. Then keeping the string taut, move the pencil around the two tacks.  What you end up with is a drawn ellipse.  The closer together the two tacks, the more circular the ellipse becomes.

That the planet orbits are elliptical means that the planets are closer to the Sun at one time in their orbit and further away at another.

The Earth is closest to the Sun in December and further away in June.  The distance between the Sun and Earth does not make a difference in temperatures on the planet. The angle of the Sun’s rays is what makes the temperature differences and seasonal changes. 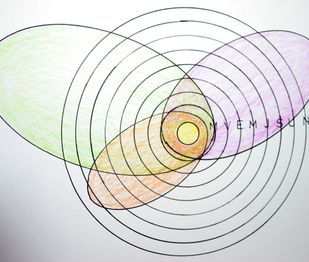 Comet orbits are not circular.  Instead, they are very elliptical. They are far away from the Sun at one end of their orbit and very close to the Sun at the other. Compared to the orbits of the planets, the orbital shapes of comets are very different.  The orbits of the comets have been colored in this illustration to allow you to distinguish one from another. The yellow sun is at the center. There are some comets with a perihelion distance thousands of times the distance from the Sun to the Earth. The comet orbits illustrated show "short period" comets that orbit within a few years. 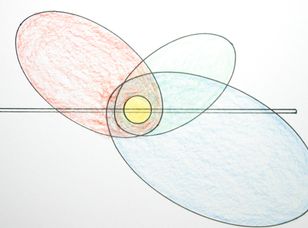 In this next illustration, I drew the ecliptic plane as the horizontal line and included orbits of a few comets for comparison.  Notice the difference. The planets are orbiting primarily on that one horizontal plane while the comets orbits go in all directions.

If you compared the orbits of the planets and comets looking down from above the north pole of the sun, you would see a big difference in the shapes of the orbits. Most comet paths are much larger than illustrated.

Where does Comet ISON go?  It follows a very elliptical path around the Sun.  At one end of its path it is far away from the Sun.  As it move closer to the sun along the orbital path, it speeds up.  Every day the speed of the comet increases as it approaches the Sun. Once it whips around the Sun and begins its journey back out into space, the gravity of the Sun attracting, or pulling at it, will cause it to move slower and slower.  It will move the slowest at its furthest point from the Sun.  The Earth also changes its speed every day.

It may be that Comet ISON has orbited the Sun before. It may have been so long ago that we have no written record of it.  Or, the comet may be a new one.  I will discuss later the origin of comets.

The orbit of Comet ISON will most likely be determined soon by astronomers who will publish their results. Then we will know how big the orbit is and when It may have been here before.  Ancient records could then be examined for that time period in history to find any indication of the comet’s existence.  If there is no written record of the comet at a time when mankind could leave records by manuscripts, carvings, paintings, etc, perhaps the comet is new one.

In this last illustration, the orbits of the comets have again been colored to distinguish them from one another and from the planet orbits.  Notice the comet orbits are not circular in appearance. What is unique to each orbit is the extreme elliptical shape compared to the shape of planet orbits.

Comet ISON will be here in November of 2013.  It will be very beautiful and striking to watch.  The comet will be in our skies for several weeks.

Some people are already calling Comet ISON the "Christmas miracle." Comets are not miracles.  They are one of the beautiful phenomena of our universe.  It may be that all the other stars in our universe also have comets orbiting them.

Persons of any age may contact me with questions about comets. I will try to answer them in this column. I hope I have made this easy enough for children to understand orbits of comets.