Whoever believes they have discovered a new comet should send by email or fax the celestial location of the comet to the United States Naval Observatory. 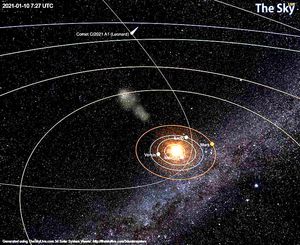 The person sending the first received notification will be considered to be the official discoverer of the comet. That person is always given the option to name the comet.  This comet was discovered by Greg Leonard (Greg Leonard | Catalina Sky Survey (arizona.edu)) on 3 January, 2021 at the Mount Lemmon Observatory in Arizona.

The tail of the comet will become more visible as the comet approaches Earth and the Sun.

Right now the comet is between the orbits of Mars and Jupiter. As it moves, it will reach its closest point to the Sun about 3 January 2022.  That means we will get to watch this comet grow bigger and brighter for almost a whole year as the heat of the Sun causes the material in the comet to sublimate from ice to gas. As the comet’s ice changes to gas, the power of the Sun’s solar wind will push the growing tail away from the Sun.

Comet Leonard will be at its closest point to earth about noon EST on 12 December 2021, an early Christmas gift. Its distance will be about 21,690,493 miles from Earth, as distance which is quite safe for Earthlings.. Six days later, on 18 December 2021, the comet will pass close to Venus missing that planet by about three million miles.

Comet Leonard will be close to the horizon. It’s magnitude or brightness will be near 4 or 5. The lower the number, the brighter the object. During its closest approach to Earth in early December, with binoculars or a monocular, you will see it well. If we’re lucky, we will be able to see it without magnification. 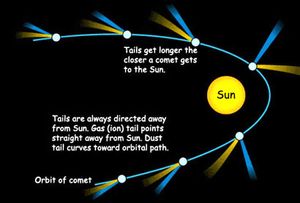 Visible first in the Northern Hemisphere, skywatchers below the equator will begin to see it in December 2021. Even though Comet Leonard is a  fast moving comet. Because of the great distances in space, it will be very slow moving to our eye. You will be able to distinguish its motion after 10-30 minutes when seen against the background stars of our galazy, the Milky Way.

According to EarthSky, the newly found Comet Leonard might become 2021's brightest one of the year. On the first day of December 2021, if you face east about an hour before sunrise, you will see Comet Leonard between the constellation Ursa Major (Big Dipper) and the star Arcturus. See diagram to the left for a mid-December location.

Children will love trying to see this comet.  This will be a good time to teach them how to use a telescope or binoculars to see a star, comet, planet, or the Moon. With binoculars, it is best to anchor the binoculars to a tripod.  If a tripod is not available, have the child anchor their main binocular holding arm against a tree, fence post, porch pole, or another sturdy point.  This will help them hold the binoculars steady.

When viewing will be good, the Zanesville Astronomy Club will open the LEWIS TELESCOPE in the Lewis Observatory for observations.  A newsletter will be sent out to all members.  If you wish to be put on the mailing list, no matter where you live on this beautiful planet, let Irene Baron know. Send an email to irenebaron@irenebaron.com and put COMET LEONARD as the subject matter.

If you take any pictures of the comet and would like to have them posted here, send them to the same email address.
Comets are fun.  Look forward to Leonard appearing in our morning and evening skies. 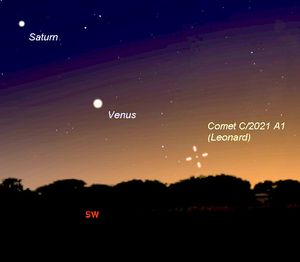 Check out the references below for additional information.

Should We Get Ready For Another Naked-Eye ‘Comet Of The Century?’ ‘Comet Leonard’ Just Appeared From Nowhere (forbes.com)