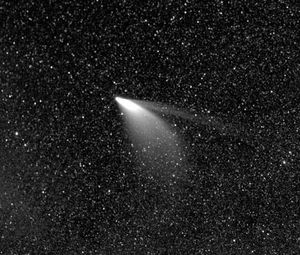 In March 2020, astronomers were looking for near-Earth asteroids and found a comet. Since the Near-Earth Object Wide-Field Infrared Survey Explorer found it, the comet was named for that NASA mission, the NEOWISE. From studying the orbit, NASA determined NEOWISE  will return in 6,800 years. Being the third comet discovered this year, the full assigned name for this comet is C/2020 F3 NEOWISE. The NEOWISE vehicle is pictured to the left under the comet.

In March the comet was closer to the Sun than the planet Mercury.  The heat of the Sun on its icy rock made water vapor expand and turn to gas.  That action pushed small dust particles with the gas which helped to create what appears to be a double tail. Some astronomers suggest it may actually be three tails. The larger tail is the dust tail. The smaller and upper tail is an “ion” tail. The water vapor gases lost electrons due to the Sun. Atoms missing electrons are called ions.

The direction of a comet’s tail is caused by the solar winds.  When you see the tail, picture the solar

wind pushing at the comet. The tail is blowing opposite the direction of the Sun. Notice in the NASA diagram the position of the tail as it moves in its path.

NEOWISE  has been visible in the early morning skies and will be coming brighter in the early evenings after sunset. Each time you see it until it moves away from us it will appear brighter. Right now it is brighter than Halley’s Comet was in 1986.

WHERE TO SEE NEOWISE

As mentioned, the further north you are, the higher the comet will appear in the sky. Look at the chart at the bottom of the page

Find a tree-free site where you can easily see the horizon.  An hour after sunset you should be able to see the comet to your northwest. To find the comet, look for the constellation Ursa Major, also called the Big Dipper. You will find it in the northwest sky. Look below that constellation to see the comet. Each night it will appear higher in the sky. The further north you are, the higher the comet will appear in the sky.

Although you can see the comet without a telescope, binoculars will make it more clear. If you use binoculars, support your arm against a tree, porch column, or something sturdy to help eliminate natural shaking which will occur. When you are looking at highly magnified objects, your normal body heartbeats and motions will create a shaking.

For morning viewing, set your alarm for an hour before sunrise. When you go outside, look to the NE to see the comet.

After 11 July it is visible after sunset in the NW sky. See the NASA chart at the top left to see how it will move in the sky night by night.

The pictures you see of the comet were taken from telescopes.  When you look at it without such magnification, it will look like a fuzzy star with a faint tail. If you look at the chart at the top left, you will see the direction the comet will travel.

Comets are unpredictable. Everyone hopes it will become spectacular. However, it may fizzle out like many before it. Let’s hope NEOWISE  will be one of the greats!

While looking up outside, Jupiter will be a bright object in your night sky along with Saturn.

To find the planets, I recommend a free astronomy application on your smart pad or phone such as "Night Sky." Once it is installed, hold the device up and move it around day or night to find what is up there. It gives you constellations, stars and star names, comets and objects of interest.  Give the device to the children and let them teach you about the night sky. It's a free educational event you can enjoy every clear evening all year. Take advantage of astronomy free apps. Many are available.

Comet Neowise is the latest to tease with the potential of a big show.
https://www.cnet.com/news/comet-neowise-is-the-latest-to-tease-with-the-potential-of-a-big-show/

Comet NEOWISE Sizzles as It Slides by the Sun, Providing a Treat for Observers
https://www.nasa.gov/feature/jpl/comet-neowise-sizzles-as-it-slides-by-the-sun-providing-a-treat-for-observers

This NASA CHART below shows where the comet will be found. 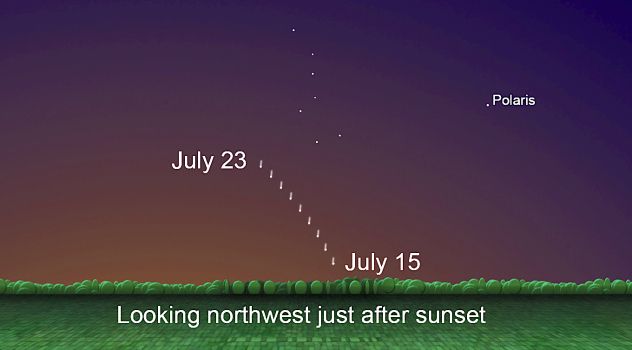