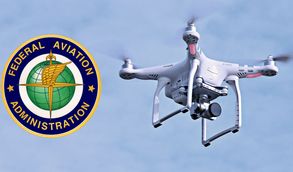 The FAA requires every drone owner to register each drone posted on the FAA registration list. You are expected to know if your drone must be registered.

If you are not sure whether your drone has to be registered, check out the list online at: http://federaldroneregistration.com/requireddronestoberegistered .
This list may not contain every single drone available but is updated daily. If your drone  is not on the list, check back. The FAA welcomes feedback and comments regarding other drones to add.

If your drone is NOT registered you may be subject to the consequences defined in the pending U.S. Government drone regulation terms. To begin your registration, use the registration form found at: http://federaldroneregistration.com/

You can fill out the online Drone Registration Application in less than 5 minutes. FAA agents will review your application for omissions and errors. FAA experts will begin your registration process and a registration certificate will be emailed to you shortly after. At that stage, you will receive a registration number to mark on each drone that will be tied directly to the owner. Throughout this process, the FAA will communicate any further registration requirements directly with you. They are available 24/7 to help with any questions that you may have.

The Federal Aviation Administration recently released its new book of drones rules. It can be found online at: https://www.faa.gov/news/updates/?newsId=86305 .

The summary of small unmanned aircraft rule (Part 107) is located at: http://www.faa.gov/uas/media/Part_107_Summary.pdf 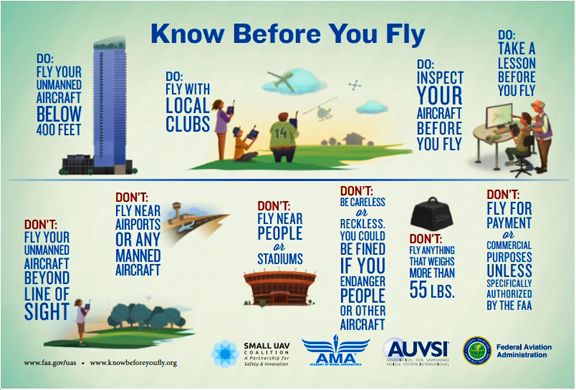 Key points in the summary include:

Transportation of property for compensation or hire allowed provided that The aircraft, including its attached systems, payload and cargo weigh less than 55 pounds total; The flight is conducted within visual line of sight and not from a moving vehicle or aircraft; and The flight occurs wholly within the bounds of a State and does not involve transport between (1) Hawaii and another place in Hawaii through airspace outside Hawaii; (2) the District of Columbia and another place in the District of Columbia; or (3) a territory or possession of the United States and another place in the same territory or possession.

If a company or person wants to fly a drone in a way different from these rules, they can do so by applying to the FAA for a Certificate of Waiver, which if granted will give them a legal exception. The rules are a major step towards clarity in the vague world of drone law, though I'm certain there is much still to be decided and discovered in the full body of the rule.

• At all times the small unmanned aircraft must remain close enough to the remote pilot in command and the person manipulating the flight controls of the small UAS for those people to be capable of seeing the aircraft with vision unaided by any device other than corrective lenses.

• Small unmanned aircraft may not operate over any persons not directly participating in the operation, not under a covered structure, and not inside a covered stationary vehicle.

• Must yield right of way to other aircraft.

• May use visual observer (VO) but not required.

• First-person view camera cannot satisfy “see-and-avoid” requirement but can be used as long as requirement is satisfied in other ways.

• Maximum altitude of 400 feet above ground level (AGL) or, if higher than 400 feet AGL, remain within 400 feet of a structure.

• Operations in Class B, C, D and E airspace are allowed with the required ATC permission.

• Operations in Class G airspace are allowed without ATC permission.

• No person may act as a remote pilot in command or VO for more than one unmanned aircraft operation at one time.

• No operations from a moving aircraft.

• No operations from a moving vehicle unless the operation is over a sparsely populated area.

• No careless or reckless operations.

• No carriage of hazardous materials.

• Requires preflight inspection by the remote pilot in command.

• A person may not operate a small unmanned aircraft if he or she knows or has reason to know of any physical or mental condition that would interfere with the safe operation of a small UAS.

• Foreign-registered small unmanned aircraft are allowed to operate under part 107 if they satisfy the requirements of part 375.

• External load operations are allowed if the object being carried by the unmanned aircraft is securely attached and does not adversely affect the flight characteristics or controllability of the aircraft.

• Transportation of property for compensation or hire allowed provided that-

The aircraft, including its attached systems, payload and cargo weigh less than 55 pounds total;

The flight is conducted within visual line of sight and not from a moving vehicle or aircraft; and

• Most of the restrictions discussed above are waivable if the applicant demonstrates that his or her operation can safely be conducted under the terms of a certificate of waiver.

To qualify for a remote pilot certificate, a person must:

Demonstrate aeronautical knowledge by either:

Hold a part 61 pilot certificate other than student pilot, complete a flight review within the previous 24 months, and complete a small UAS online training course provided by the FAA.

Be vetted by the Transportation Security Administration.

• Until international standards are developed, foreign-certificated UAS pilots will be required to obtain an FAA-issued remote pilot certificate with a small UAS rating.

A remote pilot in command must:

• Make available to the FAA, upon request, the small UAS for inspection or testing, and any associated documents/records required to be kept under the rule.

• Report to the FAA within 10 days of any operation that results in at least serious injury, loss of consciousness, or property damage of at least $500.

• Conduct a preflight inspection, to include specific aircraft and control station systems checks, to ensure the small UAS is in a condition for safe operation.

• Ensure that the small unmanned aircraft complies with the existing registration requirements specified in § 91.203(a)(2).

A remote pilot in command may deviate from the requirements of this rule in response to an in-flight emergency.

• FAA airworthiness certification is not required. However, the remote pilot in command must conduct a preflight check of the small UAS to ensure that it is in a condition for safe operation. 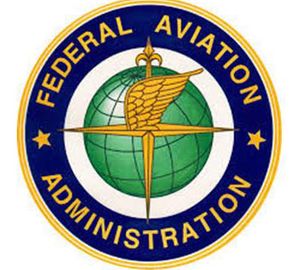