Ever since I learned that Europa, one of Jupiter’s moons, has water and ice, I have been thinking it may have black smokers.

Europa is smaller in diameter than Earth’s Moon by almost 300-miles.  Like our Moon, the same side of the orb faces the planet it revolves around. The lava flows on our Moon may be creating an increased gravitational pull toward Earth due to the heavy and dense basaltic type igneous/lava rock. The Earth’s pull on the lava flows effectively keeps us from seeing the back side of our Moon from Earth. The other side of our Moon does not have such lava flows.

Europa does not have such lava flows visible on the surface due to the water ice covering the moon. If lava flows exist, they would be on the ocean bottom. If they did exist, that would explain why the same side of Europa always face Jupiter.

Another reason the same side of Europa always faces Jupiter could be that the solid core of Europa is similar to the irregularly shaped solid inner core of Earth. (http://www.nature.com/ngeo/journal/v5/n8/full/ngeo1506.html?wt.ec_id=ngeo-201208)

The same hemisphere of Europa may always face Jupiter due to gravitational attraction of the more dense or larger side of the core..

WHY DOES THE ICE FLOW ON EUROPA?

Take the physical attributes of that orb into consideration.  The first thing you see in Europa images is the slowly changing surface of the water ice covering liquid below. If the material below the water ice were solid, there would not be much varied movement of the ice which exhibits evidence of flows. When one examines ice flows on Earth, such as those that occur within the Arctic icecap, the views are similar to those on Europa. A view of the Arctic icecap is to the left. The rectangular area is expanded below left.

As Earth's Arctic icecap moves, features are formed upon its surface which mimic those seen on Europa.  Reading articles in the past about research teams trying to maneuver across Arctic icefields at the Earth's North Pole with their horrendous ridges, crevices, towers of jutting ice, and little or no smooth areas, I would guess robotic or human teams on Europa would have the same level of difficulty.  Not only is the topography of Europa ice rough, the ice is slowly moving. 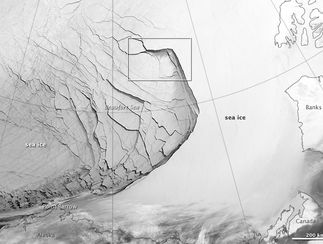 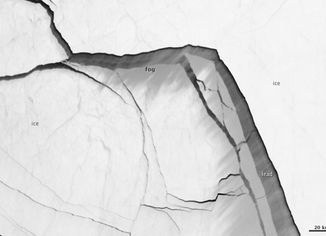 The above NASA pictures are the Beaufort Sea ice off the north coast of Alaska. To see a time lapse video illustrating the results of that arctic ice motion, click on the 1-minute long YouTube link below. This shows how fractures formed in the ice of the Beaufort Sea off the north coast of Alaska during February and March 2013. The images were captured by the Suomi NPP satellite using the Visible Infrared Imaging Radiometer Suite (VIIRS).  As you watch the video, imagine you are watching the icy surface of Europa being moved by currents of water beneath it.

The moving ice creates rough terrain on Europa with ice cliffs over 100-feet high. Imagine having to scale that!  The NASA spacecraft Galileo, in 1997, took images of the Conamara Chaos region on Europa showing various tumbled terrain. I don't think any ground based robot could traverse the ridges. A drone might work if it didn't have to rely on an atmosphere for movement.  More images are found at the JPL Galileo mission home page at URL:  http://jpl.nasa.gov/galileo.  JPL is a division of the California Institute of Technology (Caltech).\

WHAT WOULD CAUSE EUROPA'S TIDAL CURRENTS?

Perhaps temperature changes within the liquid mass under the ice cause currents. We all learned in basic science that hot (less dense) water rises and cold (more dense) water descends. What would be heating the water on the ocean floor to cause these density currents?

If Jupiter’s’ moon IO has volcanic eruptions caused primarily by changing gravitational attractions to Jupiter, Europa could also. That would make the solid region of Europa have a higher temperature than the surface which is exposed to the absolute cold of space.

COULD EUROPA HAVE BLACK SMOKERS?

Hydrothermal vents on Earth sometimes create black smokers. They have been discovered in numerous ocean areas on our planet.  A black smoker exists when water moves through crustal rock near magma and becomes superheated. The superheated water dissolves minerals from the rock through which it has traveled. The superheated water expands and rises into the cooler liquid above the ocean floor. As the plume of mineral-rich black smoky water rises from the rock and is cooled by the liquid above, the dissolved minerals within it precipitate out. They eventually fall downward to create a chimney type mound of sediment. The mounds on Earth can be quite extensive as smokers grow into one another to create large mounds of minerals. It is from these mounds that man extracts the minerals in open pit mining.

On Earth there are many regions of such deposited minerals. Over 750-thousand metric tons of copper have been removed from one Arizona open pit mine since it opened. The Rosemont Company has copper mines  that contain copper (4.2 billion pounds), gold (300-thousand ounces), silver (50-million ounces) and molybdenum (95-million pounds). The minerals in these mines are most likely direct results of black smokers pumping out minerals over millions of years. With its minimal gravity, if there are black smoker mounds on Europa they could grow to be larger than any mineral deposit on Earth. If the height of some black smokers extend to and/or melt through the surface of ice, the liquid material they expel would freeze. If the hot mineral rich water erupts with force, they would create a geyser type phenomena such as has been seen on Europa.

Did you ever watch a video of someone on Earth throwing boiling water into subzero air to see the instant change of state? That is what probably happens on Europa where the temperature above the ice is less than  -300 o Fahrenheit. With little gravity, if expelled with great force the material could escape into space. Below is a NASA image showing such an eruption on Europa. That image can be found online at: http://www.nasa.gov/content/goddard/water-vapor-over-europa/ and Hubble spots water spurting from Europa'. 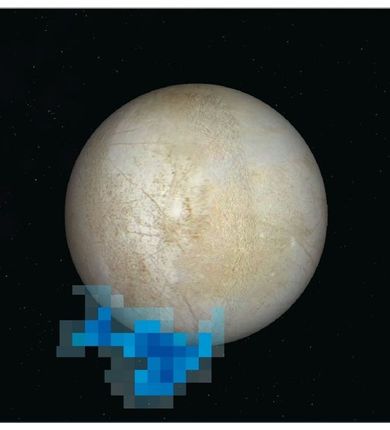 WHY DON’T SMOKERS STICK UP ON THE SURFACE OF EUROPA?

Moving ice has great power. Have you ever seen moving ice and the damage it causes?  Here in Zanesville, Ohio (USA) we have several rivers which may freeze in the winter. The 4-7 inch thickness of ice, when it begins to break up and move downstream, takes with it anything that the water has frozen around. This month there have been steel and wooden boat docks and decks, boats, marinas, and other property destroyed and moved downstream by moving ice. That small amount of ice thickness has a power that has to be seen to be believed. The ice ridges on Europa are over 100-feet high. How deep the ice extends beneath them is unknown. Imagine the power of that ice when it moves.

As a black smoker would grow from Europa’s ocean floor, as it neared the surface, the superhot water it expels would begin to melt the ice above it. If it did melt the ice enough to form through the ice, when the massive ice would shift, the top of the smoker would be destroyed. If they did expel their material through the ice, the debris from the minerals would form around the opening.  If you look closely at what have been called “freckles” on the surface of Europa, you will see many have visible craters around them, most likely formed from ice melt.  The actual “freckles” are made from the dissolved minerals that the smoker brought to the surface.  Since the minerals within the freckles are primarily silicates, it can logically be assumed that the solid outer layer of that moon’s core is made of silicates. The metals in silicates can vary considerably.  The minerals within the expelled water vapor or liquid would drop back to the ice and form the “freckle” pattern as pictured in the NASA image to the left. 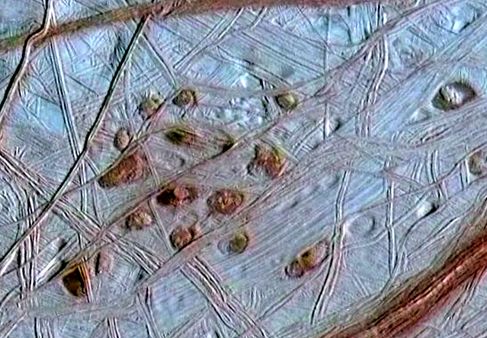 WHAT IF SMOKERS DON'T EXIST THERE?

If the smokers don't exist on Europa, the only other explanation for the "freckles" that I can think of would be solid material/continent under some areas of the moon ice. That would mean that some of the ice would be continental, as in a continental glacier. The problem with that theory is that the ice scars from motion don't match those found on Earth's continental glaciers.  Could that be because their land mass changes so much with tidal variations and moon shape elongation? Maybe those "freckles" are peaks of roc/land mass peaking through during periodical shape changes in Europa?

When the northern hemisphere of Earth had continental glaciers during the last ice age ending 10,000-years ago, the surface of the ice was fairly flat over land and ocean. There were crevices.  It could be that Europa has areas of continental glacier with geysers exploding material through the ice. If that were the case, the freckles would remain above that rock. When that rock mass expands with the tidal forces into the elongated shape, the eruptive areas would also. The thought of tracing that would be mind boggling. Whenever the moon would elongate, what used to be a near surface land mass might recede and never rise in that area again. I would guess the "freckles" don't stay in the same area due to the land shifts.

Let's hypothesize the solid material of Europa is in a spherical shape. Now, imagine shaping play dough into a sphere. On that play dough sphere make some holes with a wire and dot the top with a permanent marker to make them easily found. Next, stretch the play dough into an elongated shape. Examine the holes. Did they move at the base of the hole as much as at the top?  If that were to represent the surface of Europa's land mass, how would any volcanic/water vents change each revolution around Jupiter? How many millions of variations might there be? All that could happen to the solid mass through the gyrations of the changing moon shape boggle the mind.  What we need are some seismographs placed on the surface. What a variety of fascinating readings one would find.

I vote for the existence of black smokers on Europa. :-)