Planets in a habitable zone have been found orbiting a reddish, dwarf star, Trappist-1, in the constellation Aquarius.  A habitable zone is one which has planet conditions suitable for human life with the existence of liquid surface water or oceans. This star is over 39-light years (235-trillion miles) from Earth. TRAPPIST-1 was named after the Transiting Planets and Planetesimals Small Telescope (TRAPPIST) in Chile.

The NASA Night Sky Network provides workshop materials for astronomy clubs. The Zanesville Astronomy Club has had two workshops concerning habitable planets in space. The hands-on workshops teach participants what conditions are necessary for a planet to be considered habitable.

Trappist-1 is a young, reddish dwarf star about 500-million years old. Our yellow Sun, Sol, is about 4.9-billion years old. Sol is 74% hydrogen and 27% helium while Trappist-1 has a more metallic composition. The surface temperature of our Sun averages 10,000 oF. compared to the much cooler Trappist-1 at about 4000 oF.  Trappist-1 has a diameter of 101,154 miles similar in size to our planet Jupiter. Our Sun is about 866,000 miles in diameter. The explanatory image to the left displaying the size comparison is courtesy of ESO/O Furtak. http://www.eso.org/public/images/eso1706d/.

Three Trappist-1 planets may have liquid surface water and may be able to support human life. Within the next decade, after the James Webb Space Telescope is launched into space in 2018, astronomers will be able to prove whether Trappist-1 planets have atmospheres. The Webb scope will have spectroscopes for such determinations. 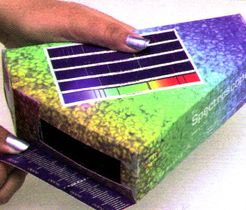 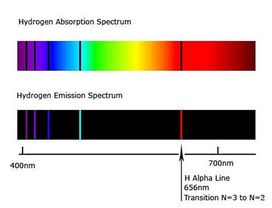 Spectroscopes are instruments which, using diffraction gratings, break up the light of a luminous object into its various electromagnetic wave lengths. Each element has emits “fingerprint” color or colors found when the element is burned, such as in a star. Each element gives off characteristic wavelengths of light called its ‘bright line spectrum.’ By seeing the wavelengths of colors given off a star through a spectroscope, the star’s elements can be determined. The same light passing through a planet’s atmosphere may be absorbed, leaving blanks. These dark lines in the ‘absorption spectrum’ tell us what elements are in the planet’s atmosphere.

I purchased spectroscopes from Stanford University to distribute to my students. (Link to order is at the bottom of this page.) My students would put them together while I discussed their construction and use. By looking inside, they could see differences in light given off from incandescent and fluorescent lamps and sunlight. To make the differences more memorable, they would use colored pencils to draw life-size spectrums. They would repeat observations and drawing using spectroscopes to view bright line spectrums of elements from spectral tubes in the darkened room. Each sealed tube contained one element in gas form. I would hook the tubes up to electricity to activate the specific gas within each. The gas would give off the bright line spectrum specific to that element. Their favorites were neon due to the brightness and sodium for its color of only two 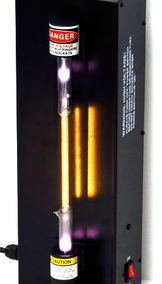 Astronomers use spectroscopes to find: elements a star is burning, if the star is moving toward or away from Earth, temperature and how fast it is rotating. That same starlight passing through the atmosphere of one of its planet’s will let us know what elements are in the planet’s atmosphere due to absorption of ‘bright line spectrums’. See image to left by Khan Academy. https://www.khanacademy.org/partner-content/nasa/measuringuniverse/spectroscopy/a/absorptionemission-lines

Earth’s Moon rotates once per revolution as it orbits the planet. This keeps the same side of the Moon always facing Earth. The side of the Moon facing Earth has numerous lava flows of a dense, basaltic, igneous rock. This heavy mass of lava is gravitationally attracted to Earth more than the less dense cratered side of the Moon. The Moon is therefore ‘tidally locked’ in its orbit. If Earth were tidally locked to Sol, we would experience 6-months of daylight and 6-months of darkness. You could imagine the temperature differences that would occur on the two sides of Earth. The habitable areas temperature-wise would most likely be the twilight zones or underground.

It is theorized planets orbiting Trappist-1 are tidally locked with the same side of each planet always facing the star. If these planets have atmospheres, having one planet side always facing the star and the other always in darkness may create very different and perhaps turbulent atmospheric motions and winds. Like our Moon, if these planets are tidally locked, they would make one rotation per revolution around their star. Depending upon atmospheric density and thickness, through convection and atmospheric motions the dark sides of the planets may gain enough heat to become habitable and support human life..

Planets in our Solar System orbit the Sun along a path (ecliptic) extending outward from the Sun’s equator. The planets seen orbiting Trappist-1 are also lined up along that star’s ecliptic making them perfect for astronomers to see planets as they pass in front of, or ‘transit,’ the star. When they passed in front of the star the amount of light which optical telescopes measured from the star decreased. It was determined that decrease was caused from transiting planets. This is the method used to determine how many planets were found so far to be orbiting Trappist-1.

Curious minded persons may ask how long it would take to travel the 39-light years to Trappist-1. The only speeds we can use for determining the time would be by using current space probes, none of which are headed toward Trappist-1.   Voyager-1, traveling at 38,000-mph, would take 700,000-years. The Space Shuttle orbiting Earth at 17,500-mph would take 1.5-million years. New Horizons spacecraft, which flew past Pluto traveling near 32,000-mph, would take about 800,000 years. Future speed-of-light craft at 186,000 miles per second would reach the star in about 40-years.

It’s interesting to speculate about planets found in habitable zones around other stars. In the 1980’s there was an announcement made that only 25-planets like Earth might exist in the universe. As astronomical instruments improve and the number of known galaxies increases, that 25-number seems woefully inadequate.

A thousand years from now perhaps space travel will be commonplace. I wonder if any of the Trappist-1 planets will be populated by humans? I wonder how many planets will be found in habitable zones around stars with intelligent beings who will respect humans and not consider them fodder?

As mankind continues to populate Earth, I wonder if habitats on orbiting, artificial space colonies, the Moon, asteroids, planets and other star systems will become common? What will cause evacuations from Earth?  Will orbiting greenhouses be needed to provide food for humans when Earth has no space left for plants? When will trees disappear from Earth? Will they be grown in massive orbiting greenhouse museums or will greenhouses be limited to food growth? How will the disappearance of plants from earth affect wildlife? Will space greenhouses include animals or insect pollinators?

On long space flights it may be difficult to grow enough food for crew and passengers. Should hybrid humans be created via injection of chloroplasts and necessary DNA to allow human photosynthesis for humans to feed themselves by exposing their greenish skin to light? Would humans remaining on Earth prefer that method of nourishment over manufactured food?

So many questions with no answers. Any prophets around to speculate about the future of human life on Earth? Or shall we refer to the Bible book of Revelation?