There has been recent interest in the Hale Telescope housed in the observatory on Palomar Mountain in southern California.  The history of the Hale Telescope mirror is quite interesting. At the time of construction it was the largest reflecting telescope in the world.

After an unsuccessful first attempt, the 200-inch (about 17’) wide mirror was poured successfully by Corning Glass Works of New York on their second try. The Pyrex glass cooled over a period of 2-years.

Being almost 17-feet high above the rail flatcar, the mirror could not be shipped to California totally by rail. From what I understand, where the overpasses were too low, the mirror had to be transported around them by truck. The mirror was evidently anchored on its’ side on the truck bed.  The routes had to be determined way in advance.  Where ever there was a l 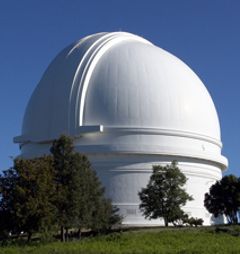 ow overpass, arrangements had to be made with land owners to allow the truck and mirror passage over their land. Fences had to be cut and rebuilt. Electricity and telephone wires had to be dismantled for the passage and repaired afterwards. The process was evidently handled with efficiency. Even with the difficulty, the trip to transport the mirror to California took less than a month.

Once the glass arrived at the CalTech optics lab, the grinding of the mirror into the perfect concave shape had to take place. Close to 10,000-pounds of glass were ground off the base. I was told one technician placed the tips of his fingers at the edge of the mirror during grinding. According to the story, the heat of his hand raised the mirror and the grinder cut off the raised area.  When the mirror cooled, the length of the grinding time had to be increased to bring the mirror surface below that imperfection. According to my source, the technician was severely reprimanded. It’s a wonder he was not fired. Once the mirror was installed at Palomar Mountain, it took about two years of adjusting, polishing and making it perfect.

Ninety-miles southeast of Los Angeles, the observatory is open to the public every day. First used in 1949, visitors to the site have been able to take self-guided tours weekdays. On Saturday and Sunday they may opt for a guided tour. There is a gift store where visitors can purchase magnificent poster-size photographs of images taken through the Hale Telescope.  The sets of posters I purchased at the site were used in my astronomy classrooms for many years. They were loved by students as they were excellent photographs with much clear detail. The observatory is now owned and operated by the California Institute of Technology (CalTech).

The first time I went to visit the observatory was on a Saturday afternoon during the year I first taught science in Los Angeles.  A friend and I took a packed lunch and had a picnic on the grounds overlooking the observatory. The sunny mountain drive was beautiful. To see that white observatory against a deep blue sky day makes a day easy to remember.  What I first remember about walking into the observatory to see the Hale Telescope is the size of the dome and telescope.  At 135-feet tall, the observatory easily houses the telescope which is so large, astronomers sit within it. 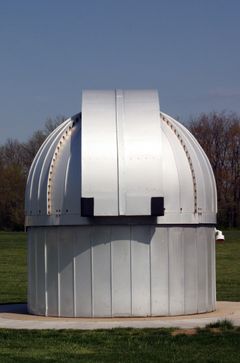 Here in Zanesville, Ohio, the Lewis Observatory was built by the same company which constructed the Palomar observatory. The Lewis Observatory looks like a miniature Palomar. Very classy! The original shutters at Palomar weigh 125-tons each. And I thought the Lewis Observatory shutters were heavy! The Lewis ones slide apart with some resistance. I start them from inside and then step outside to open them to the correct distance.  When closed, they are locked back into a secure position.  The top section of the Lewis dome rotates on one track. There is an electric motor and rubber wheel providing traction for the dome to move. It is an easy task for it to make the dome rotate.

Like the Hale Telescope, once it was installed in place, the Lewis Telescope had to be adjusted.  When the university had it installed, they didn't have anyone adjust the telescope.  I thought it was calibrated by the Astronomy or Physics Departments. Wrong. I went to use the telescope and found great errors.  When it would be brought to a position, the end of the scope would drop 8-inches. There are two spotting mirrors. When I put something in position in the spotting mirrors, the primary mirror was not in position.  That was a frustrating evening.

Dr. Hudnell Lewis, the telescope designer, was gracious enough to show me how to correctly tighten the telescope to the equatorial mount.   Another avid amateur astronomer and friend, Charles (Chuck) Bruckelmeyer, helped me to align the eye piece, secondary and primary mirrors using a laser collimator. Chuck was the President of the Columbus Astronomical Society for several years.  He spent years in his work room grinding mirrors for his own telescopes. His wife laughingly said she always knew where he was. Chuck with other amateur astronomers often worked together nightly grinding the mirrors, some of which took 1-1/2 years to complete.

We're planning to have the local Zanesville Astronomy Club meeting on the evening of 12 September to view the First Quarter Moon. The rain date is 13 September. In the past the telescope lenses with that Newtonian Cassegraine telescope have provided excellent detail.  I'm looking forward to community members of all ages being able to see the magnified Moon for the first time in their lives.  What a rush that will be!  If time permits, we'll check out M-31/Andromeda Galaxy and any planets in position. Weather permitting, we'll have a grand evening. The event beginning at eight o'clock in the evening is free to all participants. Children must be accompanied by an adult. The Lewis telescope is housed on the north side of the Ohio University-Zanesville campus.