Designation as an Honorary Member of Det B-420 Company D, 1st SFG (ABN), 1st SF and a Green Beret.

During the Vietnam War, life in Bangkok, Thailand was solitary for a single American female in her 20’s who worked for Battelle Memorial Institute. Hired out of Columbus, Ohio, my government orders assigned me to OSD/ARPA/R&D-Central Command/Thailand (Office of Secretary of Defense, Advanced Research Projects Agency, Research & Development Center, Thailand) as Information Officer. The first few months I knew the Battelle staff and the foreign national locals who worked in our office.  ARPA is currently called DARPA. 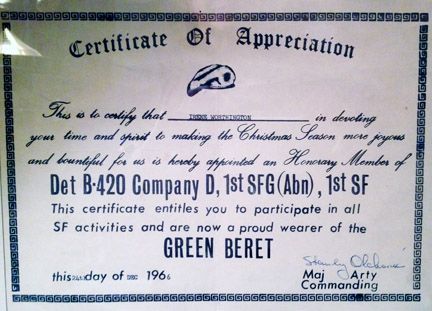 Beginning work in the ARPA building, a three-story rectangle on a small “soi” (street) which dead ended at a leather factory, the only time I saw anyone other than Battelle staff was at lunch. The Thai cafeteria on the ground floor served local employees. It competed with the cart vendor (we called such food carts “portable Howard Johnsons”) outside the compound gate. The cart owner fried bananas while you watched. He wrapped the sweet and sizzling caramelized bananas in a paper cone of newspaper. Most military officers assigned to ARPA left the compound for restaurants or brought lunch. I was often the only American in the ground floor cafeteria experimenting with Thai cuisine.

A Battelle chauffeur took staff to the ARPA building in the morning and returned us to our residences after work. Call it culture shock, but I didn’t venture far from the hotel until I moved to an apartment on Sukhumvit, Soi 24, several months later. (A soi is a street.)

At the entry to the military commissary one Saturday there was a card table with a sign stating, “Free Dinner with an American Family.” That sounded wonderful. I walked over to the two women working at the table and asked about the dinner. I was told it was only for active military. A few weeks later, during another commissary trip, one of the women asked if I was still interested in a dinner with an American family. She said she couldn’t offer it as part of the USO but as in individual. After the first visit to their home, Mildred (Millie) and Bill Fager unofficially adopted me into their family. One of their daughters who worked at the American Embassy was about my age and helped begin my Bangkok social life.

One evening Millie lamented that very few American families would participate in giving R&R soldiers a taste of home cooked food, conversation and peace. I told her I would be glad to help for a group of soldiers, never a solitary one. After that I was called upon to occasionally prepare dinners for teams of soldiers on R&R who didn’t want to experience the negative side of Bangkok offered servicemen. At times, I was only given a day’s notice for ten or more dinner guests. I loved to cook and found it a pleasure to prepare meals which were so appreciated by others who hadn’t had a home cooked meal in months. The USO never offered or provided financial support for food supplies. Fortunately, as a GS-13, my salary was sufficient to cover expenses. My few American friends were not interested in helping out.

One memorable dinner occurred when I had purchased ingredients for a barley soup to cook for the weekend. On Saturday the USO contact called and asked if I could take about fifteen R&Rs the next day, Sunday. I said yes and upped the quantity of ingredients. I didn’t have much else to serve but water, soft drinks, tea and coffee so I  cut up vegetables for snacking and had a dip. I made a few loaves of French style bread. The men in street dress who climbed out of taxies at noon the next day had just arrived in country physically and mentally exhausted. Most were officers my own age or older who just wanted a peaceful, safe atmosphere in which to rest. That was fine with me. I cooked while they rested and talked.

Although cooling fans helped, my shady, 2-story apartment was hot. The furnished, ground floor living room was about 35X20-feet with a small kitchen and miniature back patio. The gentlemen appreciated my homey apartment with plenty of seating. With iced tea or soda in their hands, they sank into thick cushions of rattan sofas and chairs with sighs. A few stood near the kitchenette to talk with me, but most just exchanged stories with one another with laughter occasionally punctuating intense, quiet conversations. My stereo provided soft jazz. Dinner was served buffet to eat wherever they wished. Half stood, others sat.

The thick barley soup was served with dollops of sour cream. It was deeply appreciated, even jokingly bringing a marriage proposal! In Bangkok you cooked with and drank only bottled water. Meals had to be prepared in a fairly sterile environment. Fortunately I had PX and commissary privileges and was able to obtain clean food. (Lettuce still had to be soaked in bottled water with a teaspoon of Clorox for 20-minutes to kill bacteria.)

One of the officers had a malaria attack during the afternoon. I thought he should be taken to the local American hospital. Resisting, perhaps so as not to be separated, the men assured me I was not to worry and that it was a reoccurring event once you had malaria. All of them provided their ill brother with care and rest while at my apartment. The ill and very weak serviceman apologized for being ill and said he felt embarrassed to have a bout of malaria while in my home. He didn’t realize how much he was respected by me and loved by his military brothers who treated him with honor and concern. He rested. When they reluctantly left my home 3-4 hours later, the officer said he felt much better. He didn’t look it. I had never been around anyone having a malaria attack and worried about him for months. As with most such visits, I never kept names nor corresponded with any of the military fed in my home and never saw or heard from them again.

A week before Christmas in 1966 the USO called and asked if I could get some female friends together to visit a group of isolated Green Berets stationed at an undisclosed upcountry Thailand location on Christmas eve Day. Most single gals I knew were busy with family and declined. When I asked if we should wear … hiking clothing, slacks or what, the man replied, “These soldiers haven’t seen or talked to an American female in months. Tell them to wear dresses.” I told him I was having a hard time finding anyone available and was assured that any number would be okay. I found a few friends to participate and the contact gentleman at the USO found a few.

A large, unmarked, navy blue van picked us up at two Bangkok locations. One American gentleman dressed in khaki shirt and slacks drove and a second one rode shotgun in the passenger’s seat. Once out of Bangkok, we were driven toward the northeast for over an hour.  Eventually, we were each given a bandana and requested to wrap it around our head to cover our eyes. The bandana security was checked to make sure we couldn’t see where we were going. We were admonished to keep our heads lowered so that we couldn’t peek through the bottom of the bandanas. They told us we were heading toward a secret location which must be protected.

When the van came to a stop about 30-minutes later, we were asked to remove the bandanas. The van had stopped to the side of a clearing with several large, brown, canvas tents.  Beyond the clearing was jungle in all directions. A group of American soldiers in uniform and Thai military trainees stood between us and the tents with smiles on their faces. The commanding officer greeted and introduced us to his men. They were training Thai soldiers for counter-insurgency measures.

The United States at that time was part of the SEATO agreement (South East Asia Treaty Organization) and obligated to come to the aid of Thailand if that country was attacked. The Chinese were continually broadcasting on the radio that they were going to invade Thailand. The Green Beret base we visited was one of perhaps several such bases to train Thai military in correct combat procedures. The Americans were physically much larger than the slight Thai soldiers who remained respectful and helpful during our day visit. We remained at the base camp for 4-5 hours.

After enjoying a basic, Christmas style dinner amidst much conversation in the mess tent, we were lined up outside for a ceremony. All the men wearing their Green Berets were lined up and standing at attention as were the Thai military behind them. The commanding officer gave each of the visiting young women a handshake, “Certificate Of Appreciation” and a Green Beret to wear. We were saluted by the military. I was thrilled to receive such an honor and meaningful gift. The bordered certificate stated: Certificate of Appreciation, This is to certify that IRENE WORTHINGTON, (Hand typed)  in devoting your time and spirit to making the Christmas Season more joyous and bountiful for us is hereby appointed an Honorary Member of Det B-420 Company D, 1st SFG (Abn), 1st SF. This certificate entitles you to participate in all SF activities and are now a proud wearer of the GREEN BERET this 24TH DAY OF Dec 1966,  Maj Stanly Olchonic Arty Commanding.

We left the USMC counter-insurgency base immediately, donning the bandanas for 30-minutes. It was another adventure I was gifted to experience and deeply appreciated. It was just part of one day I could spend to help bring smiles to our Marines. Bless them! I have sincerely respected every member of the United States Marine Corps ever since, especially the Green Berets.

That was perhaps one of the most significant USO events in which I participated and one easily recalled. Of all the awards I have received in my life only 3 grace my office wall. This now yellowing award is one of the three.