HOW DID THE WISEMEN KNOW THE MEANING OF THE CHRISTMAS STAR?

LET ME TELL YOU ABOUT THE SECOND EVENT THEY WITNESSED!(You can read the actual dates, details, and references in my book, Unraveling the Christmas Star Mystery, available from Amazon.com.

Please check out the first event blog introduction at: http://www.irenebaron.com/irene_baron_blog/how_did_the_wisemen_know_the_meaning_of_the_christmas_star

FACTS OF THE SECOND EVENT

What was the second celestial birth announcement for Jesus Christ?

The second event of significance occurred on 25 August 4 A.D.

Venus, Mars and Saturn were all at opposition and extremely brilliant. Opposition occurs when the position of the planet is such that the whole side of the planet facing Earth is illuminated or lit up by the Sun. A comparison would be when the whole side of the Moon facing Earth is illuminated as a full Moon.  At other times in its journey around Earth, the Moon is less bright.

The Sun, with three brilliant shining planets above it in the dawning sky, caught up with the brilliant Saturn and moved in front of it, eclipsing the planet. Saturn remained eclipsed by the Sun for four days. Eclipses have always been a major event for astronomers. This was one of the most spectacular episodes in this series of events so far.

What this meant to the ancient astronomers/wisemen was very important for eclipses to planets rarely happen. According to their ancient symbols and symbolism, the eclipse of the Saturn god would have been interpreted to mean that the Sun god, worshipped at that time as the giver of all life, eclipsed the ruler of their universe and father of all kings, Saturn. This proved that by being eclipsed,  the Saturn god was shown to lose significance or importance. Saturn showed it would become subordinate to the coming new God of the universe that was going to be born in Judea.

Saturn was the protector of the Jewish people. Practical and wise, this god was linked with politics and friendships.

Remember, as previously mentioned, in the presence of Mars anything that happened in Judea was magnified in importance.  Therefore it was significant that Mars was in the sky at that event. Mars takes the position high above so that god can observe all the happenings for Judea for that "star" ruled over Judea. Any astronomical event of Mars connected with Judea was to be considered positive. Any celestial event considered to be important to Judea had to involve Mars to increase the strength of the interpretations.

The presence of Mars intensified astrological implications and gave more magnificence to the birth of the new God. The presence of Mars at any birth produced leaders and sportsmen who were supposed to have sharp perceptions and make incisive decisions. The new God would be one with will power and who would assert himself.

Any event occurring when Venus was visible in the dawn sky was interpreted to affect royalty, nations, agriculture, health and the outcome of wars. Believed to be the god that started the astrological forecasts of the future, Venus is the god of love, beauty and harmony, and rules the constealltion of Taurus. The Babylonians believed the god brought sympathy and pleasure. Some considered her the "queen" of the heavens.

So far there have been two significant events symbolizing the importance of the new God. The astronomers of that time in history must have been thrilled to see such messages in the sky. I imagine they were corresponding with their nation’s leaders to inform them of the coming events. This was the first time such a God was going to be born on Earth.

The diagram for this event is illustrated below. The view is at Bethlehem of Judea. What you see in the diagram is what the sky would look like at six o'clock in the morning on 25 August in the year 4 A.D.  The top of the diagram is the point at 90-degrees altitude or elevation. It is the point right above your head if you were standing in Bethlehem. The 0-degrees position designates zero degrees in elevation, or the horizon, where the Earth and sky meet. In this diagram the Sun has risen and already moved in front of Saturn, eclipsing that planet. To the right of the diagram is the legend for each object. 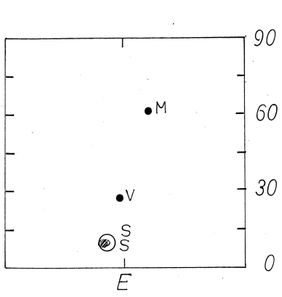 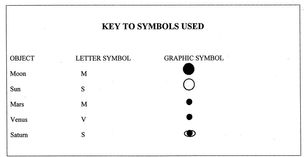