HOW DID THE WISEMEN KNOW WHO WAS BEING BORN IN BETHLEHEM?

The Christmas star told wisemen WHERE . How did they know WHO was being born?

Nine additional celestial birth announcements for Jesus Christ have been discovered. They told the wisemen how important and powerful the new God would become. The last birth announcement was the position marker over Bethlehem of Judea, like a present day GPS.

The Christmas star was discovered using astronomy computer programs provided by NASA. It was while using these programs that the nine additional heavenly birth announcements, occurring just prior to the Christmas star, were discovered. They told ancient astronomers the importance and powers of the new God.

The Sun, Moon, planets and stars move in mathematically precise patterns. Due to the unvarying motions, ancient astronomers predicted star positions years in advance. Computers can now calculate the position of celestial objects thousands of years in the past or future.

Other than the Sun and Moon, each point of light in the sky was called a star by the ancients and thought be a god. Each god, having special characteristics and powers, passed wisdom to those who could interpret their motions.

For example, the ancient wisemen believed the Sun: 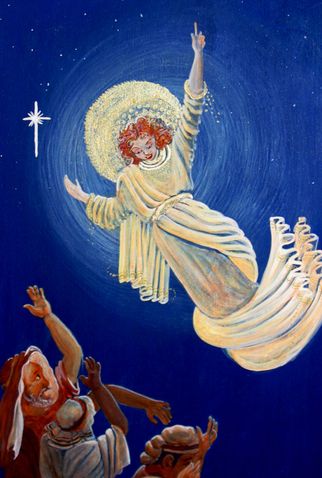 Two thousand years ago astrological interpretations were made using symbols and symbolism passed down from the Babylonians. Evidence of the symbolic interpretations can be found in paintings and carvings found on buildings, monuments and temples. They can also be found on coins, legal seals, and in historical records.

FACTS: The Moon and Mars were in the sky about 45-degrees above the horizon at sunrise. As the Earth rotated to the east, the Sun rose with Venus. It is common to see Mercury or Venus by the Sun. It is uncommon to see the Moon, Mars and Venus so close together. Venus and Mars were at opposition, positioned in their orbital path beyond the Sun. Their full faces were illuminated and extremely brilliant in the morning sky.

ANCIENT SYMBOLIC INTERPRETATIONS: The presence of the Sun god and Moon god together forecast greetings, good health, and established a foundation for the throne of the ruler in power. The unusual brilliance of the planets in opposition at the same time illustrated how the gods demanded attention for what was to come, like numerous neon signs in the sky.

Venus, the goddess of fertility, foretold a birth. At any birth, the ancient astronomers believed the characteristics of whatever gods were in the sky foretold the characteristics and fortune of the child being born. Since Venus was also the god of love, modern Christians might assume Venus was chosen to become part of the birth announcement of the God who requested everyone love one another. Venus was known to affect royalty, nations, and the outcome of wars. The child being born would therefore become royal, cause changes in nations and the outcomes of wars.

Mars was the war god. Mars protected the country, the growing harvest, fought against plant disease, was the guardian of good weather and the protector of Judea. When in the sky, Mars magnified for Judea all that transpired, including the importance of any God being born. Anything of importance to Judea had to involve Mars.

When the Mars god and Venus god were near one another, the symbolism meant victory would prevail. This was interpreted to mean that nothing could stop the coming birth of the new God. The presence of Mars with reference to a birth forecast a leader who would have sharp perceptions, will power, and would assert himself when needed. The new God would understand what He saw and make incisive decisions by going straight to the heart of a matter. He would penetrate through layers of deception before making conclusions or judgments. In other words, He would know all.

The interpretations of the symbols were correct. Nothing could stop the birth of Christ who would bring love to the world, affect royalty, nations, and the outcomes of many wars. He saw through the words and actions of others with great perception, decided instantly what was right and wrong, and understood the turmoil of His day. He would assert himself when needed.

The next eight announcements showed how powerful He would become.

For the celestial objects to be in the correct place at the right time, the birth announcements had to have been planned and put in motion at the creation of the universe. The Sun, Moon and planets presented their messages when there were wisemen who could correctly predict and interpret their motions. This happened at the correct time in history, when Christ was in gestation. The sky gods appeared at dawn, the time of day when the celestial heavens were observed. By their actions and positions, the sky gods told the wisemen about the new God. He would become the most powerful and greatest God in the universe.

The interpretations of the next eight significant sky events showed the most important sky gods individually bowing before the new God, showing subservience. By the ninth significant sky event, the wisemen were probably trembling in their sandals. They were witnessing the predictions of the greatest event in the history of mankind. Once they had the information concerning the power and importance of the new God, the final star showed where the holy birth would take place.

The rest of the story may be found in the paperback book, Unraveling the Christmas Star Mystery.