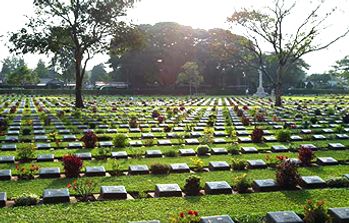 Since I lived in-country, when I first heard about the Thai cemetery in the late 1960’s, I was determined to journey there. Kanchanaburi War Cemetery is an allied forces war cemetery, not an American war cemetery.  Being a very patriotic young woman, visiting the Kanchanaburi Cemetery was important to me. World War II ended when I was a child. Two of my uncles, Corporal Jeremiah (Judd) Worthington, US Army and Major John David Moore, USAF, fought in that war and returned to the United States alive, thank God.  That war affected my family and my country.

The Vietnam War was being fought when I lived in Southeast Asia. I had friends who were stationed in Vietnam. I had dated some and wondered if I’d ever see them again. They knew where I was based and had buddies look me up when they arrived in Bangkok on R&R. I always treated soldiers with utmost respect. It takes commitment and honor to enlist and pledge your life to your country. One way you can honor them is to visit the section of your local cemeteries  dedicated to military heroes. It takes little time out of your day once in a while to drive there, get out of your car and read the names of those in your area who lost their lives in past wars or to walk among the graves to say prayers for them.

At the time of my visit to the Kanchanaburi War Cemetery I was living in Bangkok, Thailand. Hired by Battelle Memorial Institute out of Columbus, Ohio, my original position was that of an Information Specialist assigned to the Office of the Secretary of Defense, Advanced Research Projects Agency, Research & Development Center-Thailand (OSD/ARPA/R&D-Center, Supreme Command, Thailand). I was hired because my science background included studies in every field of science and a course in World Religions. Southeast Asia residents were primarily Buddhist or Hindu. It was important to Battelle that a person going into the upcountry and isolated areas of Thailand should understand and respect religions of others. I did.

My job was to gather information, take aerial photographs, and help write a classified military manual, The Mekong River Project. Thai employees took upcountry ground photos. The sections of Mekong River studied were those bordering Laos, Cambodia and Thailand. The book was written for American troops who may have been assigned to that region under the SEATO Treaty. They needed to know every aspect of the Mekong River. That included where and how to cross, areas of rapids/narrows/shallows, seasonal depth variations, village locations, sources of potable water and electricity, etc. Basically, everything a military leader needed to get his troops where they were assigned and survive. (Potable water was difficult to locate. Some villagers along the river had to transport water from 2-miles inland. Like the USA, many wells they dug were saline. In the absence of motorized vehicles, they transported water by placing a wooden shoulder board or carved board over their shoulders and suspend a water-filled bucket from each end. The bent-leg lope used to carry the water had to be perfect so as not to spill precious cargo. After running 2-miles to the well, they didn’t want it to slosh and spill before getting it back home.)

Formed in 1954, the SEATO Treaty was an intergovernmental military alliance formed by the Southeast Asia Collective Defense Treaty organization. The United States government recognizes SEATO as being currently active for Australia, France, New Zealand, Philippines, Thailand, and the United Kingdom.

I worked in the Bangkok ARPA (now DARPA) building except when traveling upcountry, usually by Air America helicopters. I knew only two other women who worked in the building, both older and not interested in traveling to a cemetery. My other social contacts were a few young women my age who worked as secretaries for the United States Overseas Mission (USOM) and the American Embassy. None were interested in traveling to Kanchanaburi. Consequently I made arrangements to travel alone by local bus. 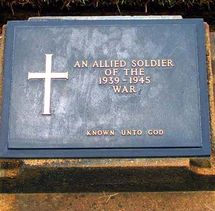 Kanchanaburi is a town made famous by the existence of the bridge over the river Kwai (Khwae  River). Japanese forces made slaves of Thai citizens and prisoners of war, primarily Dutch and American soldiers. Forced laborers were also imported from Malaysia, the Dutch East Indies and Burma. They were forced to work on a railroad to facilitate transportation of supplies to areas in Burma held by Japanese forces. During construction, approximately 13,000 prisoners of war and 100,000 civilians died and were buried along the railway. Remains of those found along the Burma-Siam railway, except for Americans, were transferred to Chungkai and Kanchanaburi cemeteries in Thailand and to Thanbyuzayat in Myanmar. There are unmarked remains which were cremated and placed in several areas of the cemetery. An image of a grave marker for such a site is to the left. Photographer unknown.

Because of their treatment during that period of time, Thai citizens held the Japanese in low esteem. I didn’t realize how low until I saw the Japanese cemetery. The allied cemetery holds 5,085 Commonwealth casualties of WW II, 1,896 war graves and one non-war grave. Eleven Muslim men from India  were buried elsewhere in Thailand. Grave sites for the allied forces were not perfectly maintained but clean with grass cut. Flowers had been planted around the cemetery. You could see these heroes were honored.

I stood at the western edge of the cemetery, my back toward the River Kwai. I looked at graves over 30-minutes. It was an emotional visit. I said prayers for those buried heroes, sad they were so far from their homes. The cemetery was not like American cemeteries which were usually pristine with maintained paths, gardens, and ornamental trees. This cemetery was basic like much of the country outside of Bangkok, the capital city. The country side was beautiful, but not groomed. Grass between grave markers was cut, but around the tombstones weeds and grass were scraggly and 10-12 inches high. Thai citizens living outside Bangkok experienced poverty. In such a poor, non-industrial town I didn’t expect graves of foreigners to be highly maintained. There were annual flowers which had been carefully planted here and there in honor and remembrance. In recent years flowering plants have been planted between each grave marker.

An elderly Thai gentleman must have thought I was searching for something. He approached and asked in English if he could help me. When I declined his offer, he stated if I was searching for the Japanese cemetery, it was nearby. He pointed to its location. He explained it would be hard to walk through the cemetery because it had not been taken care of. Grass and weeds were not cut and no flowers were planted there. The Japanese cemetery was hated and pointedly ignored. Japanese buried there would receive no honors from Thai People who loathed the Japanese and would not lift a finger to dignify or respect them in any way. His tone of voice and posture confirmed his hatred of the Japanese during our conversation.

I walked over to the Japanese cemetery but could not enter it. You couldn’t see grave markers due to a thick cover of weeds 3-4 feet tall. Thailand was home to poisonous snakes such as the light green,  ‘one-step’ viper. There was no way I would enter such a wild, weeded lot. Effectively hidden, no one passing by would know it was a cemetery. To not see the cemetery perhaps lessened the feelings generated by past sadistic actions of foreign intruders. The old adage, ‘out of sight, out of mind’ seemed to be in practice.

I understand conditions at both cemeteries since my visit to Kanchanaburi have been improved. A building in town has been set aside for records and as a history museum. If I locate my boxed and stored pictures of that visit I will post them.

Additional information and photographs of the cemetery can be found at: