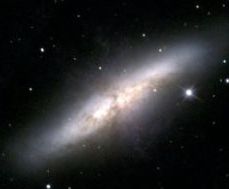 The Cigar Galaxy, M82, is located in the constellation of Ursa Major, also known as the Big Dipper or Big Bear. Ursa Major remains visible in the northern hemisphere every night of the year because it is a circumpolar constellation . Circumpolar objects revolve around Polaris, which is currently the North Star. The map to the left, courtesy of Sky & Telescope magazine, shows you where to point your telescope. 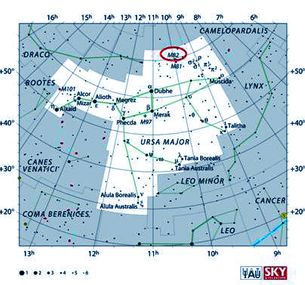 The Zanesville Astronomy Club in southeastern Ohio has viewed this galaxy numerous times, especially in the spring of the year. When viewing the galaxy with visible light, observers are asked to keep their eye at the eyepiece for several minutes or more. This allows the eye to adjust to the dark and open the pupil more fully. When this adjustment takes place the observer will see M82 with more clarity. It's always fun to watch a beginning observer experience the change of clarity. A few are astounded at the difference in their view when they stay longer at the eyepiece. They often have to be coached to stay at the telescope for they worry they are taking too long. They don't want to hog the telescope and have to be reassured their longer viewing time is normal.

The human eye will capture only visible light. through reflecting and refracting telescopes. The electromagnetic spectrum made up of energy with different wavelengths was unknown by ancient astronomers. They knew only visible light which they could see with their eyes. This time in history is astounding for amateur and professional astronomers for they are able to see images of celestial objects created by alternate forms of energy in the electromagnetic spectrum such as all the different wavelengths of visible light, infrared, ultraviolet, X-ray, etc.

To see M82 with different energies, I would highly recommend the short video about M82 on the Internet created by The Best of Science.

Images of M82 using energy other than the visible spectrum include those imbedded on this page. Move the cursor over them to read the title. As you view these images, think to yourself the awe astronomers felt when they used color film for the first time. Then imagine their astonishment when seeing these images captured using special space craft and the Hubble telescope!  I'm glad I'm not colorblind!

You have to believe we are in the infancy of the "information age" and speculate with wonder what the future will bring in astronomy research.

Feel free to ask questions and/or leave comments. Irene Baron will respond to all comments and/or questions.