As a graduate student at Texas A&M University with a National Science Foundation Fellowship in 1964, I was given the opportunity to listen to one of the men working with the Mohole Project. I apologize but I do not remember his name. I’ll call him MP for Mohole Project. What he told the audience about the beginnings of that project was impressive and fascinating.

Mr. MP stated that prior to the Mohole Project owners of companies needing geology workers couldn’t find them. Students were not interested in entering that field of study. Since subjects relating to geology in any form were not being taught in grades K-12, students interested in the sciences were not even aware of mining careers. Companies desperately needing engineers or other geology personnel were hiring them out of college at good salaries when they were only sophomores IF they could be found.

Mining and drilling companies around the world were becoming more desperate for knowledgeable employees. Through contacting one another they were determined to work together to solve the problem. An international meeting was set up to see if the situation could be reversed. The primary question raised was: what could be done to shock the world to wake up everyone as to the importance of economic minerals and the fields within geology? According to MP, this question was debated for over a year with much communication and additional meetings taking place. It was decided that there must be a project begun that would stimulate people across the economic and educational spectrums.

The suggestion was made to drill into the Mohorovicic Discontinuity, an area within the earth that separated the crust from the mantle. Nothing like that had ever been attempted. It would involve much planning and preparation. After a good deal of debate and discussion, the consensus was that drilling into the Mohorovicic Discontinuity to reach the mantle would be THE project that would solve their awareness dilemma. Everyone on the Earth would hear about it. They would truly shock the world. 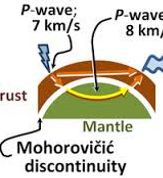 The discontinuity was discovered in 1909 by Andrija Mohorovicic (1857-1936), a Croatian seismologist. He is pictured to the left. Studying how earthquake waves moved through the earth he discovered their speed changed between the crust and the mantle. He stated the crust "discontinued" at that site. The discontinuity was later named after him. For ease of pronunciation, the name was later changed to MoHo. The diagram and photograph of Mohorovicic to the left of the MoHo are credited to: http://en.wikipedia.org/wiki/Project_Mohole

Since the project was to drill a hole to the Mohorovicic Discontinuity, the task was named the Mohole Project.

The next questions were logistic in nature. Who would be in charge of planning the project? Who would provide the funding? How would such a feat be accomplished? What equipment would they need? Where would the drilling take place? As these questions were addressed, the project began to look more feasible. It was determined that even if the project was not successful in reaching the mantle, the existence of the project would become newsworthy. People would begin to sit up and take notice of the concept.

As the logistics were addressed, the planning team had to determine where to drill. The location had to be a place where the crust was thin. They knew that as the land mass increased in elevation above sea level there was a corresponding underground mass of crust. It was as though the higher mountains had deeper roots. Since the crust under the ocean was thinner, to drill there would provide shallower access to the discontinuity. The drill core would not have to be so deep. 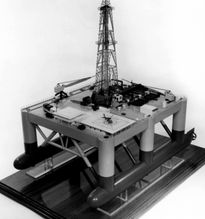 The problem with such as site was that the drilling would have to be accomplished aboard a floating platform or ship.  The drill pipes may have to descend into the ocean over a mile before reaching the outer region of the crust prior to drilling. If they used a ship, every swell and wave would cause the ship to move up and down and not be stable. That would cause the pipes to bend or twist or break. They had to design something that would be more stable. What they designed was a floating platform with six support legs which would remain underwater. Below each leg of the platform would be a large propeller. The propellers would be able to move 360-degrees to help keep the platform stable and stationary. The six propellers would be independently controlled to keep the platform in one location. It was suggested by persons in the audience of that presentation that since the President at that time (Lyndon Johnson) was from Texas the contract to build the platform was given to a Texas firm.

Different  project sites were chosen and test drilling accomplished. I believe the last testing site before the actual drilling was off the coast of Southern California near San Diego. The final site was in the Caribbean near Costa Rica.

MP stated the National Science Foundation (NSF) and the National Academy of Science funded the project for a while. He never said, but I would assume that if the agreement was international, there should have been additional funding from outside the United States. Since all the students in the A&M  summer graduate courses in geology, mineralogy and oceanography received fellowships from the NSF, I assumed that was the reason MP’s presentation required our attendance.

Did it work? Did the Mohole Project raise awareness in the field of Geology? It did. People were astounded and surprised at the audacity of the project. Newspapers and magazines had articles about it. People talked about it. MP stated that there were people who believed when the mantle would be reached, all the magma inside the Earth would explode or pour out of it and the Earth would collapse.

On the other hand, questions were asked about geology and the structure of the Earth. The curious minded were stimulated to speculate, inquire and learn. Colleges and universities began to offer more subjects in geology as interest grew. Earth sciences were taught first in high schools, then middle and elementary schools with some school districts requiring Earth Science for graduation. Mankind woke up and learned more about the field of geology, drilling, and mining of economic and precious minerals needed by the world.

MP stated the Mohole Project goal was to raise awareness about geology to get more mining engineers.

Were they successful? Indeed they were!

I was presented one of ten notebooks containing all the data about the project. Mr. MP had brought the notebook to the meeting and I was one of a few persons interested enough to stand around after to absorb all the comments. The pictures I kept but most of it deteriorated over the years of use.