Donated by International Truck and Engine, this International 4400 Crew Cab fitted with a Century 20 Series steel carrier bed and a dazzling array of Whelen Engineering lights, carries our countries national treasures, transports an historic collection of 21-90 foot 300lbs flags and is used as an "Official Caisson". With no government or tax payer money involved, the truck was kept rolling by a small band of patriots and distinguished companies. The actual flags are carried in a commemorative Chest Of Flags made with cherry wood from every county in Plymouth, MA. Since the recession of 2010 there have not been enough funds to fuel and insure either of the two flag trucks. That has not stopped the flags from being taken to special events. Mark Valentine personally ensures the flags are taken where needed by using his private vehicle. Major United States corporations need to step up to help ensure the National Flag Trucks and the National Flags are adequately funded to continue their outstanding programs within the continental United States.

The actual truck has some interesting features. As shown below, the serial number of the truck is not an actual serial number, but wording stating "SUPPORTING VICTORY." The license plate is also unique. The official plate is registered to the Massachusetts State Police as "1D." The bell is used by fire departments across the nation. They may honor a comrade lost in the line of duty by dedicating the bell to him/her for a period of 6-months. During the dedication the bell is rung in lieu of artillery or cannons. 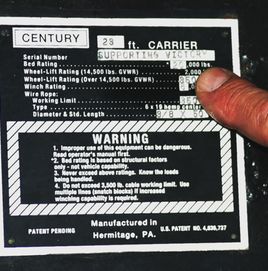 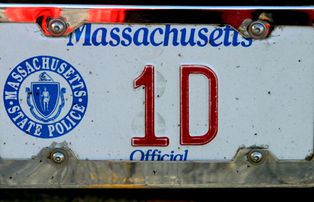 If you are a patriot, you may get tears in your eyes when you see the unfurling of any American flag. To see the National Flags will perhaps be a once in a lifetime event for anyone seeing them as they are not often exhibited. When talking with Mark one time, he said the National Flags had never been exhibited in the state of Delaware. At that time I was teaching Forensics at Glasgow High School. in Newark, DE. I suggested that the flags be exhibited at the high school as there was an active ROTC and hundreds of students available to hoist the flags off the ground. Mark thought that might be a good idea. We determined to have the National Flags in Delaware the Friday before Patriots Day. We looked for local DE sponsors and could find almost none. Mark said he would fund the event which cost over $1,000.00 for his time, transportation, and his other expenses related to the trip from Massachusetts.

The awesome event at Glasgow High School was coordinated by the Glasgow High School Principal, Assistant Principals, and the ROTC Director. In preparation for the event, I sent faxes and emails to every legislator in the state, contacted all the veteran organizations, and publicized the event through contacting the media.

Some of the images I captured are still displayed in the high school as part of an event that put that high school "on the map" in the state of Delaware and are now considered part of the heritage of that school.  That was the only location in the state to ever be honored with the display of the National Flags.

To spark a renewed appreciation and understanding of our flag and respect for our National Anthem, through our on going school program each year, thousands of students have learned history, love of country, and a certain sense of patriotic fever by participating in this "hands on" exhibit.

The images below were captured when three of the National Flags were exhibited at the Glasgow High School. Students holding the rolled up flags were joined by many others waiting for the unfurling. Every edge had to be supported along with students under the flags keeping them supported. Mark Valentine was in charge of giving out all directions for the students in distributing, holding, unfurling, maintaining them on the field, refolding, and returning to the National Flag Truck. Students knew it was a "once in a lifetime" event. To touch the National Flags and be a part of the volunteer force exhibiting them was a remarkable event in their lives.