The NRO KH-11 reconnaissance satellite telescope was designed for the Virginia based National Reconnaissance Office (NRO).   Variations of the telescope have been in use since the 1970s. 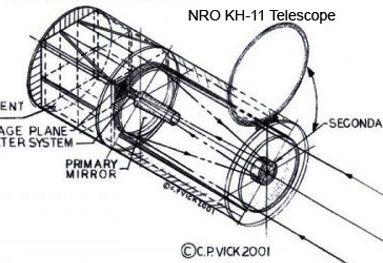 The clipped 2001 image by Charles P. Vick (Consulting and Copyright Intellectual Property) is an illustration of the US Intelligence Imaging satellite KH-11 optics format. It is NOT the present operational Advanced KN-11 Optical system also called KH-12 that remains closed from disclosure. Mr. Vick stated the KH-7 through KH-11 systems pushed to the ultimate limit optical capability beyond which is not physically possible. His image is copyrighted as Charles P. Vick 2001, ALL RIGHTS RESERVED.

The lower image by Trendsbuzz.com illustrates how the array would be deployed in space. The actual KH-11 array was photographed while in space by a French observatory in 1995.

The KH-11 primary mirrors have a deeper concave shape than the Hubble mirror allowing for a wider field of view and a shorter unit. Because of their shorter length they were nicknamed ‘Stubby Hubbles.’ They weigh less and are considered technologically superior to the Hubble.

Of interest to NASA is the capability to move the secondary mirror on the NRO telescope by either ground control or on board instruments to enable better focus. Since the NRO hardware does not have key subsystems such as solar arrays, computers, attitude control systems and instruments needed for use, they are not functional. Currently NASA does not have financial resources to fully utilize the KH-11 telescopes but expects funding by 2020.

These telescopes were designed to look at objects on Earth from a distance more than 200-miles. NASA plans to use one to look down and the other to look up. NRO has not allowed NASA to release images of the optics except for some unclassified test hardware. NASA has been directed to not discuss the now unclassified hardware. First launched in 1976, rumors suggest that over 15 of the KH-11 telescopes have been in use to observe terrorist locations and other targets of intelligence interest. A USSR agent bought the KH-11 technical handbook in 1978 from a U.S. intelligence employee. It can be expected that other nations may also have the early data on the telescopes. At this time the information on the KH-11 is unclassified. Earth scientists are looking forward to what types of data NASA hopes to collect to enlighten us Earthlings as to the patterns found on the Earth’s surface.  Acquiring information about Earth is exciting as we have so much to learn.

Although the NRO may use their satellite telescopes proactively in defense, there are fantastic opportunities to use the KH-11 for scientific data acquisition. As in the LANDSAT type satellites, much can be learned about the Earth in the fields of biology, botany, geology, oceanography and meteorology using the KH-11 digital images. Many people daily glean science resources to avidly learn more about this planet. We are anxiously awaiting the future to learn what we can with further use of the KH-11 telescope aimed toward Earth. 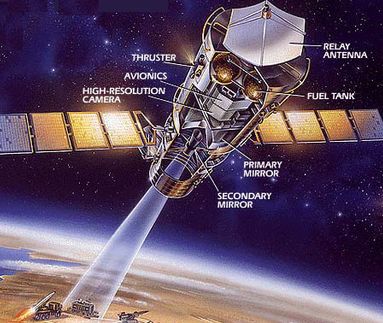 This copyrighted image below was sent by Charles Vick to be used also. 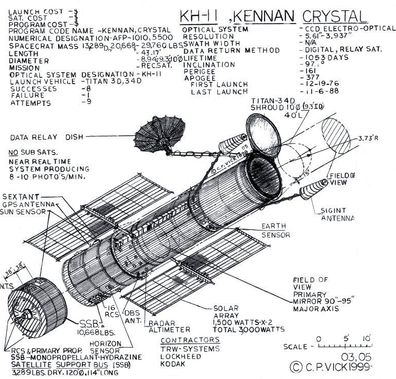