The Perseid meteor shower is the most exciting astronomy event of the year.

It can be viewed the nights of 17 July through 24 August 2020. The peak night when you will see the most meteors will be Wednesday, 12 August. 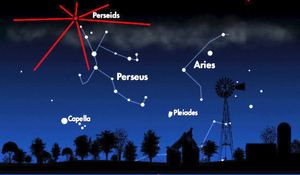 Expect light pollution from the Moon this year.

Due to COVID-19, the Zanesville Astronomy Club will not host a Perseids Meteor Shower event.

The best viewing time is from eleven pm and later.  After midnight, expect to see at least one meteor or shooting star per minute 11-12 August.  During that peak you may see up to 100-per hour. One never knows what to expect. Some years it's more than that.

The map image to the left is from the Rocky Mt. National park. It illustrates where to look to see the most meteors.

Comet Swift-Tuttle, in its revolution around the Sun, left a stream of debris. The debris the comet leaves behind is what creates the meteor show. If the rock or debris flies through our atmosphere, it is called a meteor. The comet orbits the Earth once every 133-years.

If the debris hits the ground, it is called a meteorite. The rocks that remain in space and do not enter our atmosphere are called meteoroids. 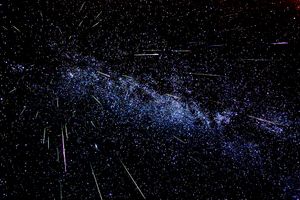 If you take time exposure pictures, the streaks of light against the background stars may be spectacular.  A guide for photographing meteors with an iPhone is at:  https://www.nightcapcamera.com/meteor-showers/

If you don’t attend a community or park viewing event, take a lawn chair out into your back yard or area where you can see the sky.  Sit facing the northeast.  The meteors will come primarily from that direction.  Many families make popcorn or snacks to be served with beverages to create a festive affair.

If you have a telephone or iPad that takes apps, load the free Meteor Counter application.  It will always give you the latest news and allows you to enter whether you are a beginner, intermediate or expert astronomer with meteors.  You can aid astronomers by providing data about the meteors you see.

An excellent NASA notation and video about the smoke left from meteors causing noctilucent clouds is at:  http://science.nasa.gov/science-news/science-at-nasa/2012/07aug_meteorsmoke/

The Astronomy Picture of the Day (APOD) guide to past photos of this shower can be found at: https://apod.nasa.gov/cgi-bin/apod/apod_search.  Be sure to check this site daily during and after the meteor shower to see the spectacular pictures captured from around the world.  If this APOD site is not one of your daily excursions into astronomy, make it a “favorite” or a “bookmark” and begin to enjoy the delights it offers.

The American Meteor Society guide for now through 17 August can be found at: https://www.amsmeteors.org/articles/

Images not sited are from NASA.

When in grade school and quite ignorant about astronomy, I thought the “shooting stars” were space ships traveling from star to star. They were a great curiosity to me and perhaps began my life-long love of studying the night sky and teaching astronomy. I remember sitting on the grass as a child in the early summer evenings to watch the meteors, the moon and constellations.  The sky was always dark and the stars bright back then.  My family loved seeing the Milky Way which is now barely visible due to light pollution. I can still visualize the beauty of the Milky Way of my youth without even closing my eyes.  For that I feel blessed.